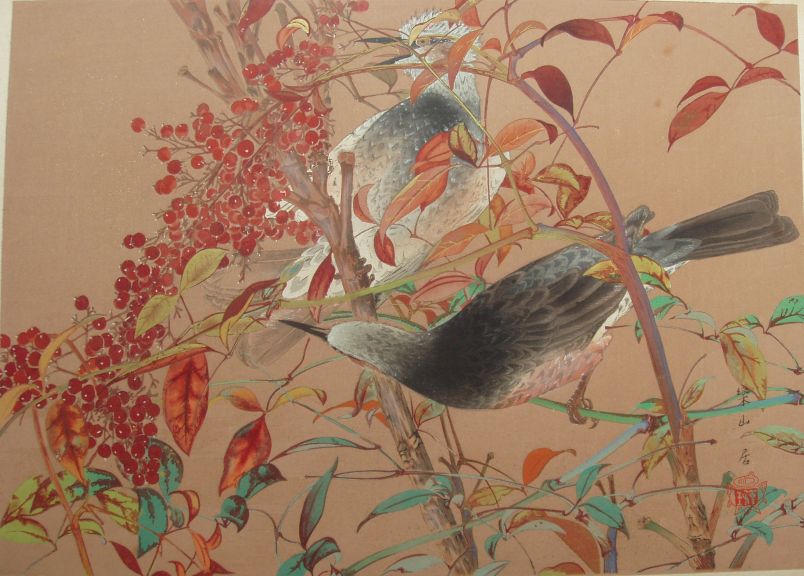 Design History:
This woodblock print was produced from an original painting on silk dating from the late 1920s whose current location is unknown. The indentification of this design as number 1 is original to Rakusan who published the print as the 1st design in his series of one hundred woodblock prints called 楽山花鳥畫譜, Rakuzan Kachou Gafu, lit. 'Rakusan's Flower and Bird Print Series'.

Edition I: The details of the initial edition I printing and publication of 1 are known precisely because a copy of the delivery documents for installment one have survived. The first print run of about two hundred copies was completed April 21, 1929, and the publication date was April 24, 1929 in installment one (of fifty). 1 apparently sold well from the start, and it needed to be reprinted at least twice before the edition I printing period ended with the series completion in mid 1933. It is likely that these subsequent edition I print runs also produced about two hundred copies each. Three quarters of all documented copies of 1 are from these edition I, including the different example copies illustrated at top above and at left below.

Edition II: 1 was reprinted in numbers equivalent to a full edition I print run sometime between 1936 and 1941. One quarter of all documented copies of 1 are from edition II, including the example at right below. Presence of city-name stamps on some edition II copies show that supplies were still available for sale after the war circa 1947. Even later sufficient edition II copies of 1 remained for sale through Walter Foster (see below). However, very few copies of 1 with a cursive Rakusan romaji signature have been documented, and there is none on Foster's personal edition II copy illustrated in the booklet. No definite edition III examples of 1 are currently known, and it is very possible that none were printed.

1 is one of the very few Rakusan designs for which any printing details exist. The Foster booklet reports that 1 required 220 printing impressions to complete.

Unfortunately, it is difficult to photograph copies of 1 with good color fidelity, especially under the different lighting conditions used for these images. The colors in the two different edition I examples are actually the same. However, although the colors in edition II copies of 1 apparently are somewhat brighter, more saturated, and more contrastive than those used in edition I, the differences are not necessarily as evident as in these particular images.

Other Foster Information:
1 is among the most familiar Rakusan designs because of Walter Foster. In addition to marketing original Rakusan woodblock prints of 1 from Japan, Foster also sold two grades of reproductions which he had machine-printed in the USA. Both reproduction versions were created from the same original model, an edition II copy of 1 in Foster's personal collection. One version is a fine art reproduction produced for individual sale, and the other appears as the lower half of page 5 of the Foster booklet.

The fine art reproduction was produced to very high standards of photolithography on good quality, heavy matte paper; and the inks were carefully color-matched to those of the original woodblock print. Because of this attention to detail, it was relatively expensive, few copies were sold, and they are seldom encountered today. Instead, what are mostly offered for sale as reproductions of 1 are actually copies of page 5 cut from the Foster booklet. Regrettably, the booklet was inexpensively and inexactly machine-printed on semi-gloss paper, and its illustration colors are not true to the original. In addition the illustration of 1 on page 5 has been cropped, removing parts of the original image on all four sides and eliminating the title-caption. Both reproduction versions are of similar size (listed as 7" x 9.75"); therefore they are significantly smaller than the original woodblock print (listed as 13" x 18"). (Only the fine art reproductions actually maintain the unique proportions of the original woodblock print; but the advertised dimensions are only rough average approximations.) Initially, Foster sold original woodblock prints of 1 for $25, fine art reproductions for $2, and the entire booklet (with 27 different designs) for $1. Because the Foster booklet was printed in great numbers and remains widely available today, it is usually less expensive to buy the entire booklet than a single page reproduction.

Because Foster could not read Rakusan's Japanese title-captions, he made up ones of his own to use in the booklet. There he called 1 "Jays and Red Berries".

Species Illustrated:
Nandina (Heavenly Bamboo), Nandina domestica, 南天, なんてん, ナンテン, nanten, is originally a Japanese native which now has many varieties and garden cultivars. In the title-caption for 1 Rakusan included the descriptor 照り葉, shori-ba, lit. 'shiny/glossy leaf', but it is unclear if he intended to indicate a kind of nandina; or if he was merely describing the appearance of the leaves at this season of the year. Rakusan used the nandina motif in several other designs including the woodblock prints linked below.

The pairing of the bulbul with the nandina is a traditional Japanese symbol of the winter season, and Rakusan illustrated the pairing in other original designs, but this is the only woodblock print showing both.

Related Designs: Other designs with nandina: