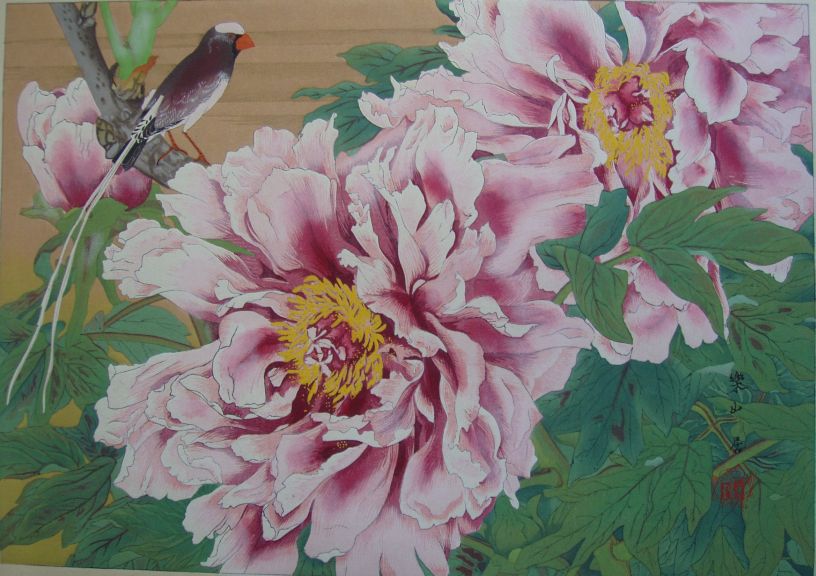 Design History:
This woodblock print was produced from an original painting on silk dating from the late 1920s whose current location is unknown. The indentification of this design as number 10 is original to Rakusan who published the print as the 10th design in his series of one hundred woodblock prints called 楽山花鳥畫譜, Rakuzan Kachou Gafu, lit. 'Rakusan's Flower and Bird Print Series'.

Edition I: First printing and publication details for 10 are known precisely because copies of the delivery documents for installments four and five have survived. Exceptionally, the listing order on both folios is reversed from would be expected with 10 listed before 9. 10 was first announced as upcoming in the documents for installment four sent out on August 21, 1929. The first printing run of about two hundred copies of 10 was completed September 20, 1929, and the publication date was September 21, 1929 in installment five (of fifty). At least one additional full edition I print run of 10 was made before mid 1933 when the series was completed and edition I printing ceased. Over three quarters of the documented copies of 10 come from edition I printings. The two different edition I copies illustrated above and at left below are typical examples.

Edition II: Probably fairly late in the period between 1936 and 1941 edition II copies of 10 were reprinted in a single, smaller, print run. Only a very few edition II copies of have been documented, but a copy with a city-name stamp shows that at least some were available for sale after World War II. An edition II copy of 10 is in the collection of Whitworth University (see collection details and center image below). This copy is one of a pair of 100 Series prints, each with an identical, and unusual, secondary inscription. Within the lower margin on the right Rakusan wrote in pencil Rakusan. Tsuchiya. 1937. . This pair of prints can be associated with an inscribed souvenir print dedicated in the autumn of 1947 (using traditional Japanese dating) which was obtained by the same collector presumably on the same visit. All three of these prints have city-name stamps indicating intended postwar distribution dates circa 1947. Unless Rakusan twice mistakenly wrote the Western style date 1937 instead of 1947, the 1937 date must have another intent and might perhaps indicate when those edition II copies were printed.

Edition III: Sometime late in the interval between 1948 and 1955 a single, very small, print run of edition III of 8 was produced. It was probably among the very last printings Rakusan was able to handle. No circulated copies have so far been located, and the only evidence for the edition III printing comes from copies remaining in the artist's collection. Unlike earlier editions of 10 these copies were signed and sealed by hand rather than by using woodblock printing.

Except for a prominent background feature, the colors used in all editions of 10 are very similar. Within the tan background at upper left all edition I copies have three horizontal bands printed in a dilute, metallic gold ink. In edition II those have been omitted. Unfortunately, no full image illustration of an edition III copy is currently available for comparison with the other editions, and the details for this area in edition III are unclear. The available images were captured under different conditions, and the other colors look more alike in person than they do in these examples.

Copies in Public Collections:
Edition II: Museum of Fine Arts, Boston, Massachusetts, USA; (1951) 51.1736 [not illustrated online except as a slightly-cropped greeting card reproduction which is unusual in having an extra seal (seal C) at lower left]

Species Illustrated:
Tree-peony, Paeonia suffruticosa, 牡丹, ぼたん, ボタン, botan, now comes in many colors, shapes, and varieties. For 10 Rakusan selected a later-blooming variety. [Rakusan also illustrated elsewhere at least one other kind of tree-peony which blooms in the winter and which defines a similar constellation of designs including number 11 in this series.]