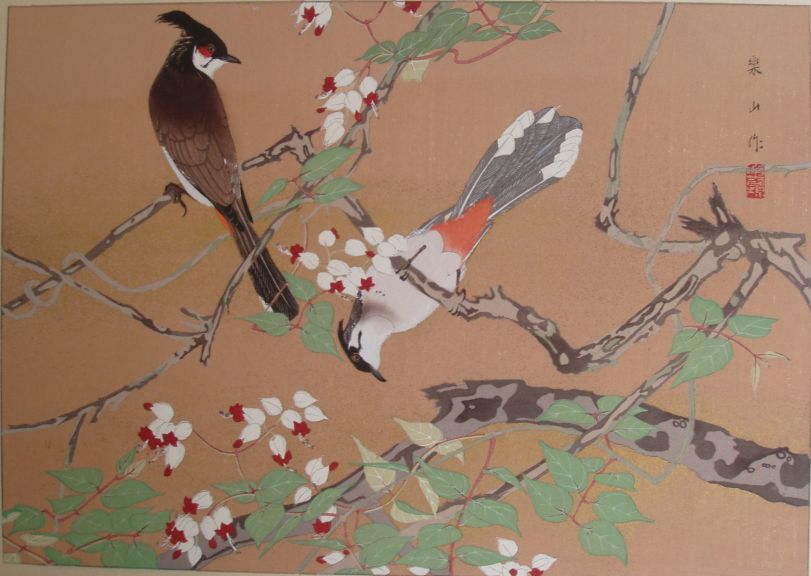 Design History:
This woodblock print was produced from an original painting on silk dating from the late 1920s whose current location is unknown. The indentification of this design as number 100 is original to Rakusan who published the print as the 100th design in his series of one hundred woodblock prints called 楽山花鳥畫譜 Rakuzan Kachou Gafu, lit. 'Rakusan's Flower and Bird Print Series'.

Edition I: Initial edition I printing and publication of 100 was in June 1933 (or perhaps slightly later) in installment fifty (of fifty). Because 100 was the last design in the series, its publication simultaneously closed out edition I. Therefore only the initial print run of about two hundred copies comprises the entire edition I for this design. About two thirds of the documented copies of 100 come from this edition I printing, including the two different example copies illustrated at top and and below left.

No edition II copies of 100 are currently known.

Edition III: 100 was reprinted in a single, smaller print run sometime between 1948 and 1955. Although very few edition III copies of 100 have been documented, they account for about one third of the total. Edition III copies typically have a Foster era cursive Rakusan romaji signature, including the example below right. 100 is one of the very few Rakusan designs for which any printing details exist. A different edition III copy of 100 is included in the Foster booklet, and there Foster reported that 100 required 130 printing impressions to complete.

The two editions of 100 are easily distinguished by color and technique differences. 100 is one of several Rakusan designs whose tan backgrounds are difficult to photograph with color fidelity. The edition I background is darker and more saturated than those of edition III, but in person the backgrounds are somewhat different colors than are illustrated here. The edition I background is actually an unshaded solid color, but the bands of gold glitter here photograph as greenish shading. However, the paler edition III background does have a band of green bokashi shading in the lower portion. Other clearly evident color and shading differences distinguish most of the other design elements, including especially the branches, leaves, and the bird at center.

Other Foster Information: 100 is among the most familiar Rakusan designs because of Walter Foster. In addition to marketing original Rakusan woodblock prints of 100 from Japan, Foster also sold two grades of reproductions which he had machine-printed in the USA. Both reproduction versions were created from the same original model, an edition III copy of 100 in Foster's personal collection. One version is a fine art reproduction produced for individual sale, and the other appears as page 23 of the Foster booklet.

The fine art reproduction was produced to very high standards of photolithography on good quality, heavy matte paper; and the inks were carefully color-matched to those of the original woodblock print. Because of this attention to detail, it was relatively expensive, few copies were sold, and they are seldom encountered today. Instead, what are mostly offered for sale as reproductions of 100 are actually copies of page 23 cut from the Foster booklet. Regrettably, the booklet was inexpensively and inexactly machine-printed on semi-gloss paper, and its illustration colors are not true to the original. Both reproduction versions are of similar size (listed as 9" x 12"); therefore they are significantly smaller than the original woodblock print (listed as 13" x 18"). (Both reproductions actually maintain the unique proportions of the original woodblock print; so the advertised dimensions are only rough approximations.) Initially, Foster sold original woodblock prints of 100 for $25, fine art reproductions for $3, and the entire booklet (with 27 different designs) for $1. Because the Foster booklet was printed in great numbers and remains widely available today, it is usually less expensive to buy the entire booklet than a single page reproduction.

Because Foster could not read Rakusan's Japanese title-captions, he made up ones of his own to use in the booklet. Here he called 100 simply "White Flowers and Birds".

Red-whiskered Bulbul, Pycnonotus jocusus, 紅羅雲, こうらうん, コウラウン, kouraun, is an exotic cage or aviary bird native to tropical Asia. Rakusan probably intended the two birds as a mated pair, but because the sexes are alike, they could actually be any two birds.