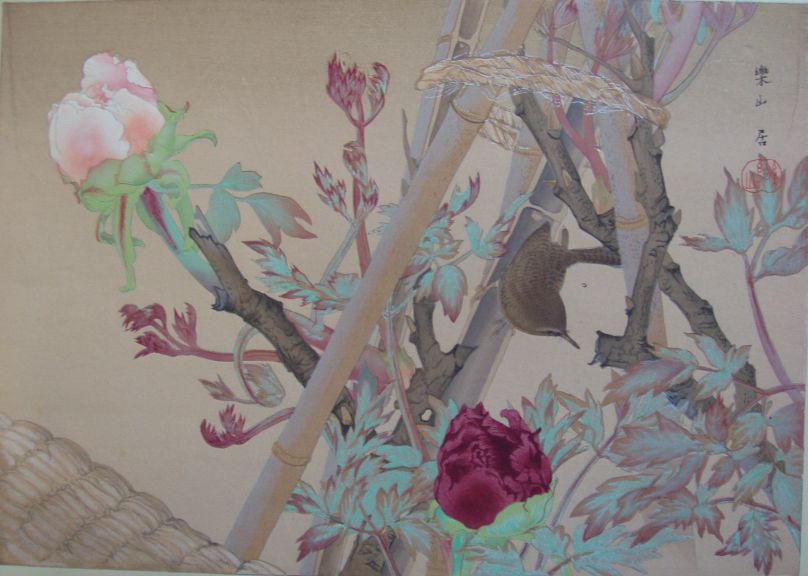 Design History:
This woodblock print was produced from an original painting on silk dating from the late 1920s whose current location is unknown. The indentification of this design as number 11 is original to Rakusan who published the print as the 11th design in his series of one hundred woodblock prints called 楽山花鳥畫譜, Rakuzan Kachou Gafu, lit. 'Rakusan's Flower and Bird Print Series'.

Edition I: The details of the initial printing of 11 are known precisely because copies of the delivery documents for installments five and six have survived. The design was first announced as upcoming in the documents for installment five sent out on September 21, 1929, and 11alt, a woodblock print of an alternate sketch of the same design subject, was included as a preview advertisement. The first printing run of about two hundred copies of 11 was completed October 24, 1929, and the publication date was October 25, 1929 in installment six (of fifty). At least one additional full print run of edition I of 11 was produced before mid 1933 when the series was completed and edition I printing ceased. Half of all documented copies of 11 come from edition I printings, including the different example copies illustrated at top and below left.

Printing of 11 in both editions include numerous examples of bokashi shading, especially in the leaves and flower buds. As a result, there is significant individual variation among copies both within and across the editions. Other than the edition diagnostic signature and seal combination at upper right, the most clearly distinguishing edition difference is the band of grayish bokashi along the top of the background in edition I which is lacking in edition II.

Species Illustrated:
Winter-blooming Tree-peony, Paeonia suffruticosa var. hiberniflora, 寒牡丹 kan-botan or 冬牡丹 fuyu-botan , both lit. 'winter-treepeony' is the earliest blooming variety of tree-peony and typically begins to bloom before the winter snow has melted. Therefore, to protect the new growth the plants are customarily staked and were often protected from the weight of the snow by a woven grass mat as a kind of open tent structure. In this illustration the bamboo stakes, rope ties, and grass mat (lower left) are all included in the composition. [Rakusan also illustrated elsewhere at least one other kind of later-blooming tree-peony which defines a similar constellation of designs, including 10, the immediately preceding design in this series.]

Eurasian House Wren (or Winter Wren), Trogolodytes troglodytes, 鷦鷯, みそさざい, ミソサザイ, misosazai, paired with the winter-blooming tree-peony is a traditional Japanese symbol of the winter season. It was also one of Rakusan's favorite subjects and he illustrated it in at least five surviving designs.