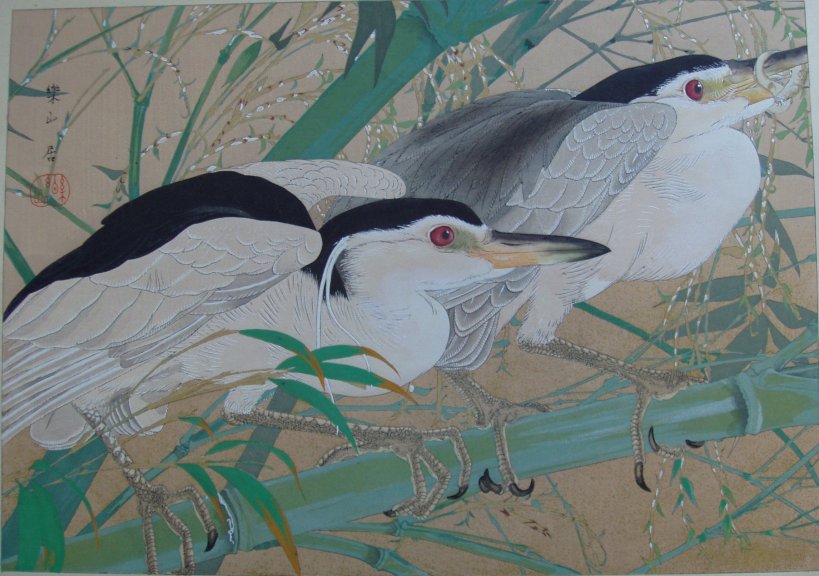 Design History:
This woodblock print was produced from an original painting on silk dating from the late 1920s whose current location is unknown. The indentification of this design as number 12 is original to Rakusan who published the print as the 12th design in his series of one hundred woodblock prints called 楽山花鳥畫譜, Rakuzan Kachou Gafu, lit. 'Rakusan's Flower and Bird Print Series'.

Edition I: The details of the initial printing of 12 are known precisely because copies of the delivery documents for installments five and six have survived. For October 1929 Rakusan had intended to publish a different design as the twelfth in the series. Accordingly, he had announced that planned design in the documents for installment five sent out on September 21, 1929. When that design could not be ready in time, 12 was substituted instead. The first printing run of about two hundred copies of 12 was completed October 24, 1929, and the publication date was October 25, 1929 in installment six (of fifty). At least one additional full print run of edition I of 12 was produced before mid 1933 when the series was completed and edition I printing ceased. As a result, three fifths of all documented copies of 12 come from edition I printings, including the different example copies illustrated at top and below left.

Edition II: 12 was reprinted in edition II between 1936 and 1940 in numbers equivalent to a full edition I print run. Two fifths of all documented copies of 12 come from edition II, including the example copy below right. Several edition II copies of 12 have city-name stamps or Foster era cursive Rakusan romaji signatures which indicate postwar distributions. Currently, no examples of edition III printings of 12 have been found, and with prewar edition II supplies sufficient to meet sales demands, it is possible that a need to reprint 12 after the war never materialized.

For edition II of 12 Rakusan made several printing changes. In edition I the background is a pale, rather neutral, tan color to which gold-colored glitter has been added over most of the lower half. On many edition I copies of 12 the glitter particles appear to have chemically reacted with the background treatment and produced a brownish discoloration around the edges of the particles. Perhaps to avoid this problem, edition II of 12 has a plain, pinkish tan background with little or no glitter. In addition almost all of the other ink colors in the design are at least subtly different.

12 is one of the very few Rakusan designs for which any printing details exist. The Foster booklet reports that 12 required 200 printing impressions to complete.

12alt, a woodblock print of an alternate sketch of the same design subject was intended to be issued the month before the initial printing of 12 as a preview advertisement, but was actually published the same day as 12 because of the last minute change to the printing schedule.

Other Foster Information:
12 is among the most familiar Rakusan designs because Walter Foster illustrated it in his Rakusan booklet on page 7. The facing page 6 is entirely devoted to instructions on how to copy 12 as a drawing and watercolor painting. In addition to marketing original Rakusan woodblock prints of 12 from Japan, Foster also sold two grades of reproductions which he had machine-printed in the USA. Both reproduction versions were created from the same original model, an edition II copy of 12 in Foster's personal collection. One version is a fine art reproduction produced for individual sale, and the other appears as page 7 of the Foster booklet.

The fine art reproduction was produced to very high standards of photolithography on good quality, heavy matte paper; and the inks were carefully color-matched to those of the original woodblock print. Because of this attention to detail, it was relatively expensive, few copies were sold, and they are seldom encountered today. Instead, what are mostly offered for sale as reproductions of 12 are actually copies of page 7 cut from the Foster booklet. Regrettably, the booklet was inexpensively and inexactly machine-printed on semi-gloss paper, and its illustration colors are not true to the original. Both reproduction versions are of similar size (listed as 9" x 12.5"); therefore they are significantly smaller than the original woodblock print (listed as 13" x 18"). (Both reproductions actually maintain the unique proportions of the original woodblock print; so the advertised dimensions are only rough approximations.) Initially, Foster sold original woodblock prints of 12 for $25, fine art reproductions for $3, and the entire booklet (with 27 different designs) for $1. Because the Foster booklet was printed in great numbers and remains widely available today, it is usually less expensive to buy the entire booklet than a single page reproduction.

Because Foster could not read Rakusan's Japanese title-captions, he made up ones of his own to use in the booklet. There he called 12 "Heron in Bamboo".

Copies in Public Collections:
Edition II: Mount Holyoke College Art Museum, South Hadley, Massachusetts, USA; (MH 1975.4.2) [illustrated online]. Species Illustrated:
All of the many species and varieties of large bamboos have the same general name in Japanese, 竹, take, and it is not clear exactly which is depicted here. The flowers are the white-spotted tassels.

The heron on the right has caught a fish and is holding it in its beak. Although the fish is not mentioned in the original Rakusan title-caption, it can readily be identified as a variety of Japanese Loach (Weather Loach, Weatherfish), Misgurnus anguillicaudatus, 鰌, どじょう, ドジョウ, dojou. Although found natively in the wild, loaches are popular and easy aquarium fish, and they are also farmed for food.

Related Designs:
Other designs with loach: