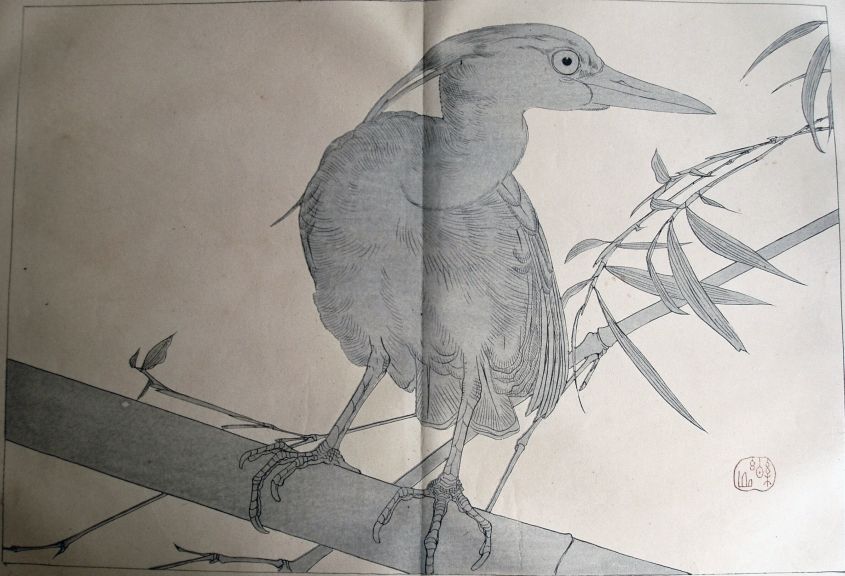 Design History:
This woodblock print was modeled on an original sumi ink sketch dating from the late 1920s. It would have been one of several created during the preparation of 楽山花鳥畫譜 Rakuzan Kachou Gafu, lit. 'Rakusan's Flower and Bird Print Series'.

In the summer of 1929 Rakusan decided to make simple woodblock prints for use as advertising previews for each of thirty-six upcoming primary designs beginning with design number 11. He selected a single, representative, alternate composition from among the preliminary sketches for each of those final designs. Regrettably, all of these original sketches are believed to have been lost many years later when Rakusan personally destroyed all of his own sketchbooks. Rakusan called these early experiments 素描 sobyou, lit. 'rough sketches'.

Since all preview sketch prints lack separate identifying numbers, each is distinguished here by the addition of 'alt' to the Rakusan-assigned number of its corresponding final version design. This numbering is intended to emphasize the close connection between the two designs, and 12alt is to be understood as the alternate design preview sketch for 12.

12alt and a batch of at least several of the other preview sketches had been printed in August-September 1929 in anticipation of later use. The distribution of 12alt was somewhat irregular, but is well attested by the surviving delivery documentation for installments five and six. Rakusan had planned to publish a different design in October 1929, and therefore the preview sketch for that other design was issued with installment five in September. However in the intervening weeks, Rakusan encountered problems producing the previously announced design, and he substituted 12 in place of the unexpectedly delayed, initially planned design. It was by then too late to use 12alt as a preview announcement, and atypically it accompanied the publication of its corresponding final version design on October 24, 1929 in installment six, rather than preceding it by a month.

Documented title-captions of the preview prints are almost always identical to those of the final version prints of the main series. However, unlike on those prints, the title-caption for a preview print was not woodblock-printed on the same sheet as the print itself. Instead it was machine-printed on a separate label which was usually glued onto the delivery envelope - and hence typically discarded with the rest of the tempororary packaging. Although the delivery documents for 12 and 12alt survived, because there was a last minute design substitution, there is no 12alt label, and presumably none was ever printed. Therefore the title-caption used here is inferred from the information documented for 12.

Copies in Public Collections:
Edition I: Honolulu Museum of Art, Honolulu, HI, USA; (1938) 10993 [illustrated online]. Species Illustrated:
The bamboo and heron are the same varieties explained in more detail in the discussion of the final version of 12.
Related Designs: