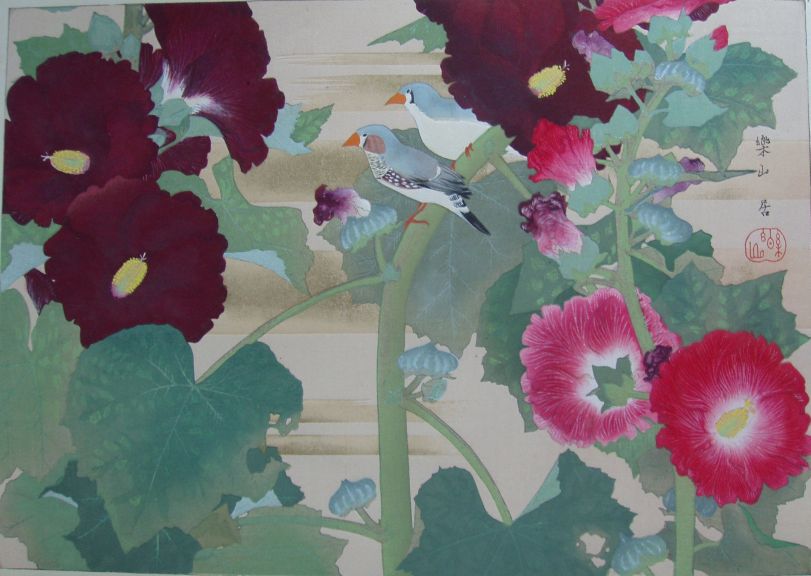 Design History:
This woodblock print was produced from an original painting on silk dating from the late 1920s whose current location is unknown. The indentification of this design as number 13 is original to Rakusan who published the print as the 13th design in his series of one hundred woodblock prints called 楽山花鳥畫譜 Rakuzan Kachou Gafu, lit. 'Rakusan's Flower and Bird Print Series'.

Edition I: Some of the details of the initial printing of 13 are known precisely because copies of the delivery documents for installment six have survived. 13 was announced as upcoming in the documents for installment six sent out on October 25, 1929. The announcement was accompanied with 13alt, a woodblock print of an alternate sketch of the same design subject issued as a preview advertisement (see Related Designs below). The first printing run of about two hundred copies of 13 was completed and the design was first published in November 1929 in installment seven (of fifty). (The exact printing and publication dates are unknown since no copies of the installment seven delivery documents have yet been located.) At least one additional full print run of edition I of 13 was produced before mid 1933 when the series was completed and edition I printing ceased.

13 is the first of several designs in this series for which no later edition reprintings are currently known. All documented copies of 13 come from the original edition I printings.

Species Illustrated:
Hollyhock, Alcea (Althaea) rosea, 立(ち)葵, たちあおい, タチアオイ, tachi-aoi, lit. 'erect mallow', is a familiar garden plant in Japan and around the world. Hollyhock was first imported into Japan from China hundreds of years ago, and the plant became important in Japanese cultural life. Many color variations and flower forms have been developed by Japanese breeders. Rakusan used several kinds of hollyhocks in his artworks.

Zebra Finch, Taeniopygia guttata, 錦花鳥, 錦華鳥, きんかちょう, キンカチョウ, kin-ka-chou, lit. 'brocade-flower-bird', is a very common exotic cage bird in Japan and around the world. The subspecies Rakusan shows in 13 is native to Australia. A mated pair is illustrated; the male is the more colorful with rusty-orange cheek patches.

Related Designs:
Other designs with hollyhock: