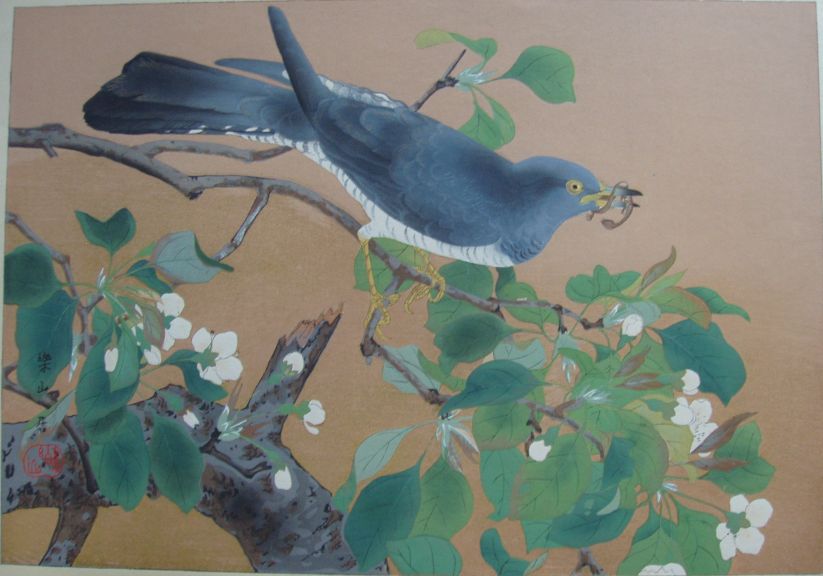 Design History:
This woodblock print was produced from an original painting on silk dating from the late 1920s whose current location is unknown. The indentification of this design as number 14 is original to Rakusan who published the print as the 14th design in his series of one hundred woodblock prints called 楽山花鳥畫譜 Rakuzan Kachou Gafu, lit. 'Rakusan's Flower and Bird Print Series'.

Edition I: The first printing run of about two hundred copies of 14 was completed and the design published in November 1929 in installment seven (of fifty). (The exact printing and publication dates are unknown since no copies of the installment seven delivery documents have yet been located.) For November 1929 Rakusan had intended to publish a different design as the fourteenth in the series. Accordingly, he had announced that planned design in the documents for installment six sent out on October 25, 1929. When that design could not be ready in time, 14 was substituted instead. Because 14alt, a woodblock print of an alternate sketch of the same design subject, was not issued as a preview advertisement in October, it was distributed later at the same time as the final version. At least one additional full print run of edition I of 14 was produced before mid 1933 when the series was completed and edition I printing ceased.

14 is among the first of several designs in this series for which no later edition reprintings are currently known. All documented copies of 14 come from the original edition I printings.

Common (Eurasian) Cuckoo, Cuculus canorus, is a native Japanese bird. Cuckoos are culturally important and there are many Japanese names for them; some of which are primarily literary or poetic. Rakusan illustrated this species in three designs, 14, 14alt, and 48 (see links below). Oddly, Rakusan used different names in the title-captions which raises the question if this indicates that he had intended to include two different kinds of birds. However, both names he used apply to the same species, and both illustrations are consistent with identification as Common Cuckoo. In 14 Rakusan used 郭公, かっこう, カッコウ, kakkou, 'cuckoo', which like the English name is an onomatopoetic rendition of its call and is the ornithologically preferred name today. In 48 Rakusan instead used 閑古鳥, かんこ鳥, かんこどり, カンコドリ, kanko-dori, lit. 'cuckoo bird', which has a similar derivation.

Rakusan typically does not mention small prey animals in his title-captions. In 14 the cuckoo is holding a small salamander in its beak. Although it may not be possible to identify the exact species, it appears to be one of several Hynobius species (family Hynobiidae), 山椒魚, さんしょううお, サンショウウオ, san-shou-uo, 'salamander'.

Related Designs:
Other designs with cuckoos: