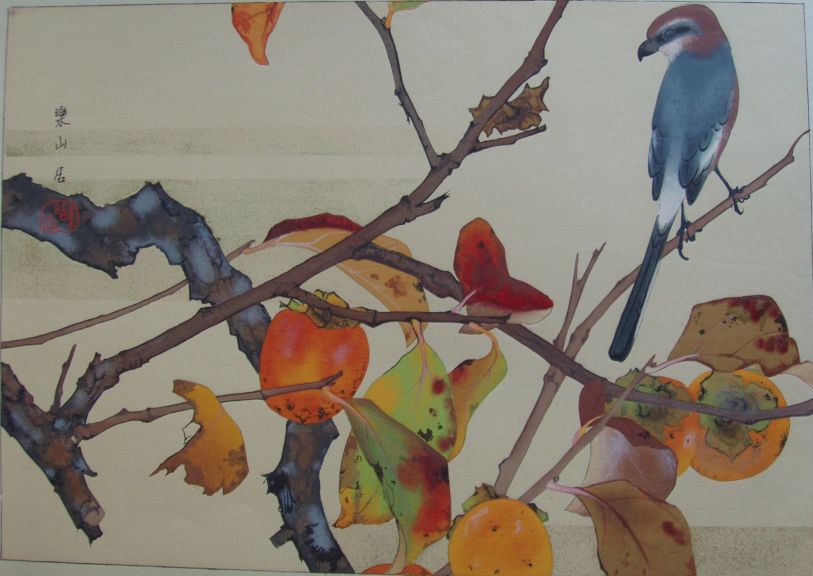 Design History:
This woodblock print was produced from an original painting on silk dating from the late 1920s whose current location is unknown. The indentification of this design as number 19 is original to Rakusan who published the print as the 19th design in his series of one hundred woodblock prints called 楽山花鳥畫譜, Rakuzan Kachou Gafu, lit. 'Rakusan's Flower and Bird Print Series'.

19alt, a woodblock print of an alternate sketch of the same design subject was issued the month before the initial printing of 19 as a preview advertisement (see Related Designs below).

Edition I: The first print run of about two hundred copies of 19 was finished and the design was published in February 1930 in installment ten (of fifty). (The exact printing and publication dates are unknown since no copies of the installment ten delivery documents have yet been located.) Another full edition I print run of 19 was probably produced before mid 1933 when the series was completed and edition I printing ceased. Currently, all documented copies of 19 come from these edition I printings, and no copies from later edition reprintings are known.

All copies of 19 show a printing fault. Although delimited by the outline block printing, a small trapezoidal area of the golden leaf at lower left remained uninked due to a later carving error.

Copies in Public Collections:
Edition I: Museum of Fine Arts, Boston, Massachusetts, USA; (1951) 51.1748 [not illustrated online]. Species Illustrated:
(Japanese) Persimmon, Diospyros kaki, 柿, かき, カキ, kaki, is a familiar fruit tree now widely planted around the world. Despite the name, the tree is native to China, but it has been bred into several popular commercial varieties in Japan where it was an early exotic introduction. The persimmon fruit is very astringent and is not eaten until it is overripe and sweet. In the title-caption for 19 Rakusan uses a descriptor, 味, aji, which typically means 'taste, flavor' in an uncommon way, indicating that the fruit is ripe to the point of being ready to eat. The descriptor 紅葉, kouyou, lit. 'red-leaf', refers to leaves which have turned color (especially red) in autumn. (Elsewhere in this series on design number 62, Rakusan translated this descriptor into English as 'red autumn ... leaves' and that translation is used here.)

Bull-headed Shrike, Lanius bucephalus, 百舌(鳥), 鵙, もず, モズ, mozu, is a familiar native bird in Japan. The Japanese name is also used as a general name for any species of shrike.

Related Designs:
Other designs with persimmon: