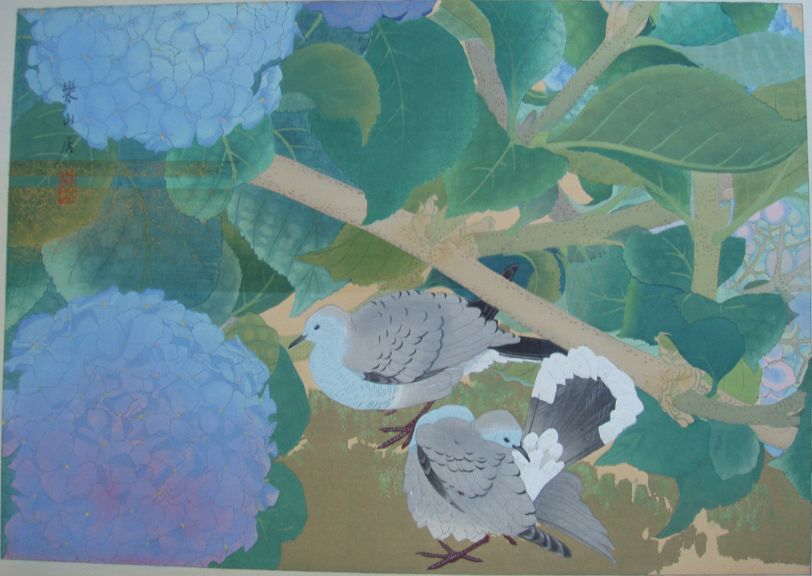 Design History:
This woodblock print was produced from an original painting on silk dating from the late 1920s whose current location is unknown. The indentification of this design as number 20 is original to Rakusan who published the print as the twentieth design in his series of one hundred woodblock prints called 楽山花鳥畫譜, Rakuzan Kachou Gafu, lit. 'Rakusan's Flower and Bird Print Series'.

Edition I: The first printing run of about two hundred copies of 20 was completed and the design published in February 1930 in installment ten (of fifty). (The exact printing and publication dates are unknown since no copies of the installment ten delivery documents have yet been located.) At least one (and possibly more) additional full print runs of edition I of 20 were produced before mid 1933 when the series was completed and edition I printing ceased. As a result, all but a handfull of the documented copies of 20 come from edition I printings, including the different example copies illustrated at top and below left.

The delivery documents for installments five and six reveal that Rakusan encountered repeated problems in publishing 20, and several unplanned delays ensued which eventually amounted to five months after the first preview announcement (instead of the usual one month).

Here the surviving documentation of the early installments ceases, but it is possible that Rakusan continued to announce 20 as an upcoming design over the next two months.

Changes for the Later Editions: For edition I of 20 Rakusan included two horizontal bands of gold glitter in the upper left quadrant of the image. These were created by woodblock printing the bands with glue on which the glitter was scattered while the glue was still wet. However in reprinting both edition II and edition III he elected to omit these glitter bands. Uncharacteristically, Rakusan changed the placement of the signature and seal for the later editions of 20. In edition I they are at upper left, and in edition II and edition III they are at lower right. Copies from either of the later two editions are so rarely encountered that it is evident that only a single, very small, print run of each was ever produced.

Edition II: A very small edition II reprinting of 20 was made sometime toward the end of the period between 1935 and 1941. Copies of 20 with cursive Rakusan romaji signatures show that edition II copies were still available for sale by Walter Foster after World War II, including the example below center.

Edition III: Toward the end of the period between 1948 and 1955 Rakusan produced a very small edition III reprinting of 20. This reprinting apparently was halted before the signatures and seals had been woodblock printed, leaving the copies unfinished. An undistributed edition III copy without a signature or seal is preserved in the personal collection of the artist. The edition III example below right from the Foster booklet has only a later, hand-applied, signature and seal.

Unfortunately, the best available image of an edition III copy of 20 comes from the Foster booklet where many of the reproduced colors in all of its illustrations are shifted to more yellow tones. The colors in the original print are actually very close to those of the earlier two editions.

20 is one of the very few Rakusan designs for which any other printing details exist. The Foster booklet reports that 20 required 150 printing impressions to complete.

Other Foster Information:
20 is among the most familiar Rakusan designs because of Walter Foster. In addition to marketing original Rakusan woodblock prints of 20 from Japan, Foster also sold two grades of reproductions which he had machine-printed in the USA. Both reproduction versions were created from the same original model, a hand-signed edition III copy of 20 in Foster's personal collection. One version is a fine art reproduction produced for individual sale, and the other (illustrated above right) appears as page 15 of the Foster booklet.

The fine art reproduction was produced to very high standards of photolithography on good quality, heavy matte paper; and the inks were carefully color-matched to those of the original woodblock print. Because of this attention to detail, it was relatively expensive, few copies were sold, and they are seldom encountered today. Instead, what are mostly offered for sale as reproductions of 20 are actually copies of page 15 cut from the Foster booklet. Regrettably, the booklet was inexpensively and inexactly machine-printed on semi-gloss paper, and its illustration colors are not true to the original. Both reproduction versions are of similar size (listed as 9" x 12"); therefore they are significantly smaller than the original woodblock print (listed as 13" x 18"). (Both reproductions actually maintain the unique proportions of the original woodblock print; so the advertised dimensions are only rough approximations.) Initially, Foster sold original woodblock prints of 20 for $25, fine art reproductions for $3, and the entire booklet (with 27 different designs) for $1. Because the Foster booklet was printed in great numbers and remains widely available today, it is usually less expensive to buy the entire booklet than a single page reproduction.

Because Foster could not read Rakusan's Japanese title-captions, he made up ones of his own to use in the booklet. Here he called 20 "Hydrangea and Doves".

Eurasian Collared (Turtle)Dove, Streptopelia decaocto, is originally an exotic pet bird regularly imported from India and locally bred. However, it was successfully released in Japan in the 18th and 19th centuries, and it is now locally common. Today, the Japanese name is usually 白子鳩, しらこばと, シラコバト, shirako-bato, lit. 'albino-dove'. In the title-caption for 20 Rakusan used a now-unfamiliar name, 長生鳩, chousei-bato, lit. 'long-life dove'. Two birds are shown, presumably intended as a mated pair; but since the sexes are alike, they could be any two birds.

Related Designs:
Other designs with different species of doves: