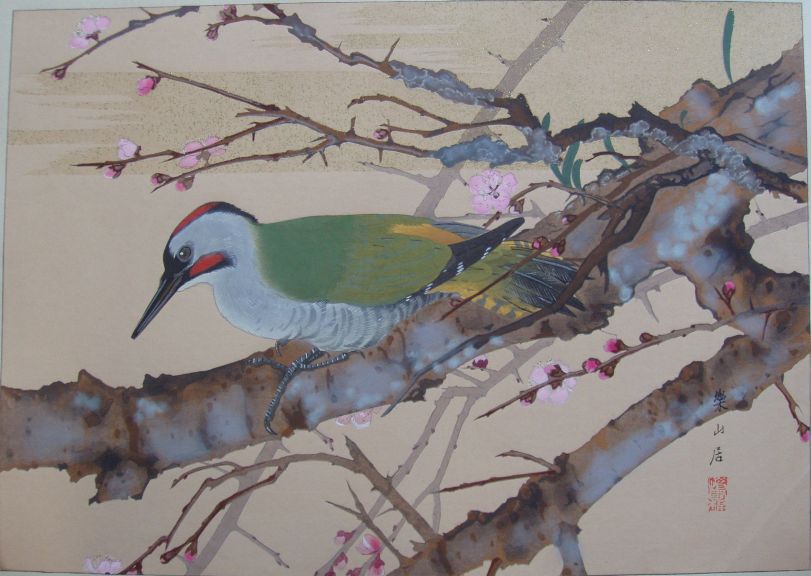 Design History:
This woodblock print was produced from an original painting on silk dating from the late 1920s whose current location is unknown. The indentification of this design as number 22 is original to Rakusan who published the print as the 22nd design in his series of one hundred woodblock prints called 楽山花鳥畫譜, Rakuzan Kachou Gafu, lit. 'Rakusan's Flower and Bird Print Series'.

Edition I: The first print run of about two hundred copies of 22 was completed and the design published in March 1930 in installment eleven (of fifty). (The exact printing and publication days are unknown since no copies of the installment eleven delivery documents have yet been located.) At least one additional full print run was produced before mid 1933 when the series was completed and edition I printings ceased. Over four fifths of the documented examples of 22 come from edition I, including the different examples at top and below left. The presence of some city-name stamps on edition I copies of 22 show that there were still copies for sale after World War II. No edition II copies are known, and with edition I copies still available so late it is probable that no edition II reprintings were necessary.

The edition I first print run of 22 contains a huge printing mistake that almost no one has recognized or remarked upon. An uncirculated Rakusan model painting typically has no signature or seal, and the intended orientation for 22 must have been unclear to Rakusan's then-new helpers. The model image was accidentally inverted, and 22 ended up being printed upside down from the way Rakusan intended. Of course the woodpecker can cling to all sides of a branch and does not look out of place either way. However, with the image inverted some of the botanical elements extend in the wrong direction. The tree branches taper down instead of up, and the few tiny green leaves along the trunk "hang" up instead of down. Doubtless chagrined, but constrained by his tight schedule, Rakusan was persuaded to issue the inverted version without comment. 22 is beautifully carved and printed, and with the inversion unnoticed it sold well. When it came time to reprint additional edition I copies, Rakusan elected to repeat the inversion in order that all edition I copies be similar.

22alt, a woodblock print of an alternate sketch of the same design subject was issued the month before the initial printing of 22 as a preview advertisement. 22alt may have contributed to the error in printing 22 because it shows the woodpecker on top of the branch rather than under it. However, 22alt is oriented correctly and in it the branches point up and taper up, and the leaves along the trunk hang down.


Edition III: Sometime between 1948 and 1955, Rakusan reprinted 22 in a single, smaller edition III print run from which only a very few copies are known. All of the documented copies, including the example at below right, have secondary cursive Rakusan romaji signatures, indicating that they were intended to be sold through Walter Foster. Rakusan took the opportunity presented by the small edition III reprinting to correct the initial edition I inversion. Therefore, when the title-caption, watermark, romaji and kanji signatures, and the seal are correctly oriented, the edition III image is "upside down" when compared to an edition I copy. However, it is actually edition I which is inverted, and edition III is the only edition printed as Rakusan originally intended. In edition III Rakusan relocated the woodblock-printed signature and seal from the lower right to the lower left (which was formerly the upper right in the previous orientation). Other changes for edition III include substituting a darker, andmore saturated, tan background, warmer colors in the bark, and less pink in the blossoms.


Species Illustrated:
Japanese Plum-Apricot (usually called Plum), Prunus mume, 梅, うめ, ウメ, ume, is a Japanese native flowering fruit tree. It has been extensively hybridized and selected, and there are many forms and colors. As one of the earliest blooming trees, it is a beloved cultural symbol of the turning of the seasons when it blooms in the winter and early spring. Although most wild trees have white flowers, a few have varying amounts of red pigment in the wood, shoots, and flowers; and this trait has been encouraged in breeding. These pigmented forms are collectively called by a different name, Red Plum, 紅梅, こうばい, コウバイ, kou-bai, lit. 'red plum', but are actually the same species. (The descriptor 紅 may be read either as beni or as kou, and can mean a wide range of colors from crimson-red through rose to pale pink, depending on the context. Although conventionally translated into English as Red Plum, many familiar 紅梅 flowers are actually pink.)

Most of the Rakusan plum designs are in black and white, and without additional information it is impossible to determine whether red plum or the original white variety is intended. In the related designs listed below those definitely identifiable as red plum are listed separately, but others must belong there as well. All Rakusan woodblock print plum designs are also included as a single unit below.

Japanese Green Woodpecker, Picus awokera, 青啄木(鳥), あおげら, アオゲラ, ao-gera, lit. 'green-woodpecker', is a common Japanese endemic species. The scientific name is derived from an older spelling of the same Japanese name. In 22 Rakusan shows a single bird with characteristics intermediate between a typical male and female, but the bird is probably intended to be male. Rakusan used the same species in 28 where a young male is being taken by a hawk.