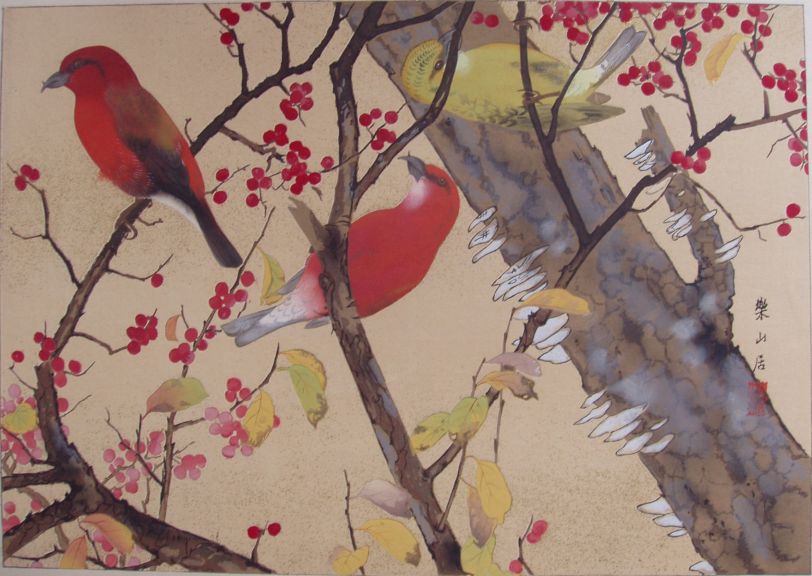 Design History:
This woodblock print was produced from an original painting on silk dating from the late 1920s whose current location is unknown. The indentification of this design as number 24 is original to Rakusan who published the print as the 24th design in his series of one hundred woodblock prints called 楽山花鳥畫譜, Rakuzan Kachou Gafu, lit. 'Rakusan's Flower and Bird Print Series'.

Edition I: The first print run of about two hundred copies of 24 was completed and the design was published in April 1930 in installment twelve (of fifty). (The exact printing and publication days are unknown since no copies of the installment twelve delivery documents have yet been located.) One additional full print run of 24 might have been produced before mid 1933 when the series was completed and edition I printings ceased. All currently documented copies of 24 come from edition I printings, and no copies from later edition reprintings of 24 are currently known.

24alt, a woodblock print of an alternate sketch of the same design subject was issued the month before the initial printing of 24 as a preview advertisement.

Copies in Public Collections:
Edition I: Carnegie Museum of Art, Pittsburgh, Pennsylvania, USA; (1990) 90.18.9 [illustrated online]. Species Illustrated:
Japanese Winterberry, Ilex serrata var. sieboldii, 梅擬, うめもどき, ウメモドキ, ume-modoki, lit. 'pseudo-plum', is a kind of deciduous native holly. In the title-caption for 24 Rakusan uses the descriptor 大粒, oo-tsubu, lit. 'large-berry', apparently with the intention of indicating a kind of winterberry. That varietal name is not in current usage, and the illustration is consistent with the usual subspecies.

Lichen and white shelf fungus are growing on the treetrunk, but are never mentioned in the title-captions.

Related Designs:
Other designs with winterberry: