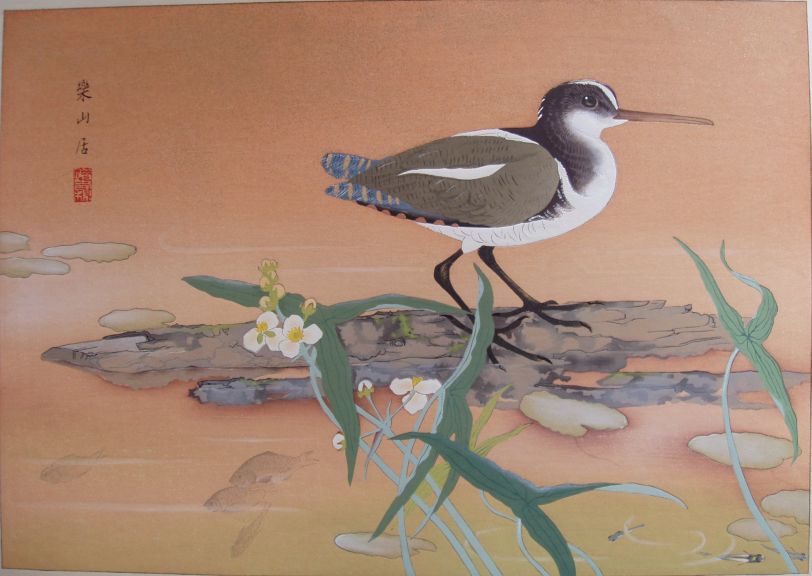 Design History:
This woodblock print was produced from an original painting on silk dating from the late 1920s whose current location is unknown. The indentification of this design as number 29 is original to Rakusan who published the print as the 29th design in his series of one hundred woodblock prints called 楽山花鳥畫譜, Rakuzan Kachou Gafu, lit. 'Rakusan's Flower and Bird Print Series'.

Edition I: The first print run of about two hundred copies of 29 was completed and the design was published in July 1930 in installment fifteen (of fifty). (The exact printing and publication days are unknown since no copies of the installment fifteen delivery documents have yet been located.) One additional full print run of 29 was made before mid 1933 when the series was completed and edition I printings ceased. A large majority of the currently documented copies of 29 come from edition I printings, including the different example copies illustrated at top and at below left.

29alt, a woodblock print of an alternate sketch of the same design subject was issued the month before the initial printing of 29 as a preview advertisement.

Rakusan considered 29 to be one of his best designs and included edition I copies in at least three formal presentation albums between 1935 and 1940. There are currently no documented examples of edition II copies of 29. Because multiple, good quality, edition I copies were still available as late as 1940, edition II reprinting of 29 between then and the studio closure in 1941 was probably never necessary.

Edition III: Sometime between 1948 and 1955, Rakusan reprinted 29 in a single, smaller edition III print run from which only a very few copies are known. All of the documented copies, including the example at below right, have secondary cursive Rakusan romaji signatures, indicating that they were intended to be sold through Walter Foster.

The two editions of 29 can easily be distinguished by color differences alone. As in many other edition III versions, the color contrasts in 29 are more pronounced overall. In edition I the background is a strong, reddish tan in the upper area; lightening and shading into a pale green bokashi in the lower right. In edition III the background is a paler, yellowish beige covered with darker, grayish bokashi in the entire lower portion. The green of the plants is a different hue in edition III and also extends over the lily pads.

Not mentioned in the title-caption in 29 is waterlily whose round, flat leaves are floating on the water surface at left and right. The general name for any waterlily (genus Nymphaea) is 睡蓮, すいれん, スイレン, suiren. It is also used as the species name for Pygmy Waterlily, Nymphaea tetragona. Another name for Pygmy Waterlily is , 未草, ひつじぐさ, ヒツジグサ, hitsuji-kusa. The small scale of the plant in 29 relative to the medaka suggests this species.

Also regularly not mentioned particularly is the unidentifiable split tree-trunk with attached bark floating in the water upon which the bird is standing. Rakusan often includes mosses, algae, and lichen without listing them either. Here they are represented as bright green patches on the tree bark which also cannot be further identified.

Painted Snipe, Rostratula benghalensis, is a water-loving species native to Japan. Today the bird is called 玉鷸, 玉鴫, たましぎ, タマシギ, tama-shigi, lit. 'jewel shorebird'. Interestingly, the species reverses gender roles, and the brightly colored bird shown in 29 is the female and not the plainer male. The name Rakusan used, むしぎ, mu-shigi, is not in current use. It is evidently also based on 鷸, 鴫, しぎ, シギ, shigi, a general name for many kinds of similar birds which may be translated as 'shorebird, sandpiper, snipe, etc.'. However, the meaning of the first part of the name is ambiguous and uncertain.

Two distinctive kinds of freshwater fish are also included, but neither are mentioned in the title-caption:

Medaka (Japanese Killifish or Ricefish), Oryzias latipes, 目高, めだか, メダカ, medaka, although not a Japanese native, is common in Japanese waters and derives one of its English names from Japanese. This rather small (2-4 cm long) native of Southeast Asia is amphidromous, meaning it moves between salt and freshwater at some point in its life. It is commonly found in flooded rice fields in coastal Asia. The medaka has been a popular pet in Japan since the 17th century, and it is hardy and easy to raise. It varies from brown or yellow-gold in the wild to white, creamy-yellow, or orange in aquarium-bred individuals. Medaka are often conventionally represented in Japanese art as seen from above and as little more than a line for the body and two dots for eyes. Rakusan shows three of these little fish in the lower right corner of 29 where they are causing concentric ripples at the water surface.

Crucian Carp, Carassius carassius, 鮒, ふな, フナ, funa, are a larger native fish. Rakusan shows four of these full-bodied carp at lower left in 29. By illustrating the largish carp at a small scale and somewhat hazily, it gives the impression of their being at some depth in slightly murky water.