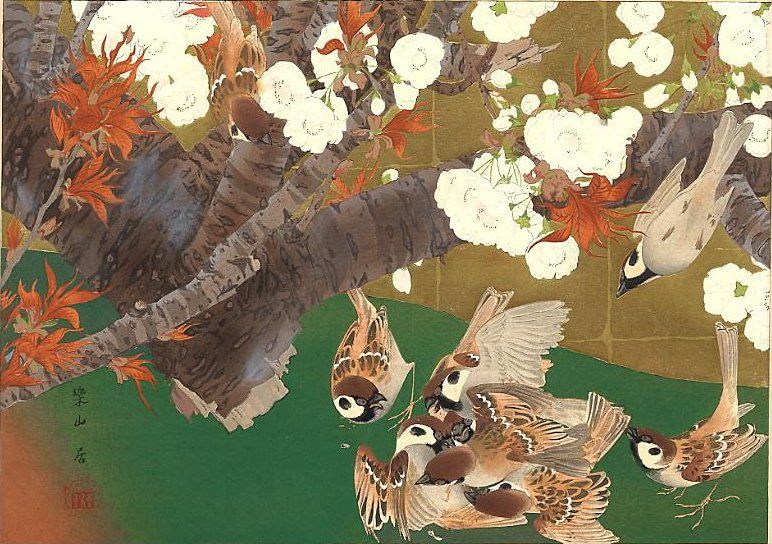 Design History:
This woodblock print was produced from an original painting on silk dating from the late 1920s whose current location is unknown. The indentification of this design as number 3 is original to Rakusan who published the print as the 3rd design in his series of one hundred woodblock prints called 楽山花鳥畫譜, Rakuzan Kachou Gafu, lit. 'Rakusan's Flower and Bird Print Series'.

3 is one of only a few designs in this series which include any manmade objects. The upper background is of gold ink applied in a pattern clearly meant to represent squares of gold leaf applied to a Japanese screen.

Edition I: The details of the initial edition I printing of 3 are known precisely because a copy of the delivery documents for installment two have survived. The first print run of about two hundred copies was completed June 8, 1929, and the publication date was June 10, 1929 in installment two (of fifty). However, at least one additional edition I full print run was made before the series was completed in mid 1933 and edition I closed. Two thirds of all documented copies of 3 come from edition I, including the different examples at top and below left.

A caution regarding edition I copies: Rakusan mixed his own inks and some of his experiments created problems. In printing the chestnut brown heads of the sparrows one of the inks used in the sequence of colors contains an unstable substance. This component can mobilize as oil or grease and soak entirely through the paper and create stain spots on adjacent sheets which are exactly the same shape as those brown areas. Due to the general solubility of Rakusan inks, these transferred marks cannot be repaired or restored and must be considered pernament condition faults. Edition I copies of 3 should never be stored touching any other artwork and should always be isolated with an impermeable barrier. By edition II reprinting this issue had been resolved and this stain transfer problem never occurs on those copies.

Edition II: An edition II copy of 3 is one of three sold in late 1935, the earliest firmly documentated date for any edition II reprints. One third of all documented copies of 3 come from edition II, including the example below right. The number of copies suggest that edition II was approximately equivalent in size to a full edition I print run. Rakusan might have printed a full print run in late 1935, or there could have been several smaller printings between then and 1941 when the studio closed for the war. A few copies of 3 with city-name stamps or Foster era cursive Rakusan romaji signatures show that edition II copies were still available for sale after World War II. No edition III reprintings of 3 are currently known, and it is possible that a sufficient supply of edition II copies meant that no edition III reprinting was ever needed.

Aside from the attribution markings, edition II copies of 3 look very much like those produced in edition I, but there are several subtle differences. Unfortunately, the copies illustrated below were photographed under different conditions and the color comparisons are inexact.


Species Illustrated:
In Japanese the general name for any cherry is 桜 (or older style 櫻), さくら, サクラ, sakura. Rakusan used both kanji styles in his title-caption versions for 3. Omuro Cherry, 御室桜, おむろざくら, オムロザクラ, Omuro-zakura, is an old and distinctive variety of cultivated flowering cherry tree originating in Japan. The name comes from a famous and very old planting of these trees at 仁和寺, Ninna-ji, the head temple of the Omuro School of the Shingon Sect of Buddhism in western Kyoto. Omuro Cherry has double white flowers on low-growing dwarfed trees, and it is remarkable for its very late bloom season. (Here Rakusan notes mid spring for 3.) As with many kinds of cultivated flowering cherry, the species identification is subject to taxonomic disagreement. In the West it is often described as a selection (or hybrid) of Japanese (Hill) Cherry, Prunus serrulata, a tall wild species with orange new foliage and smooth bark popularly called 山桜, やまざくら, ヤマザクラ, yama-zakura, lit. 'mountain cherry'. In Japan this wild cherry is sometimes identified as Prunus (Cerasus) jamazakura (with the species name taken from a European spelling of the Japanese name). Omuro Cherry may also be called Prunus lannesiana cv. Omuro-ariake in Japanese sources.