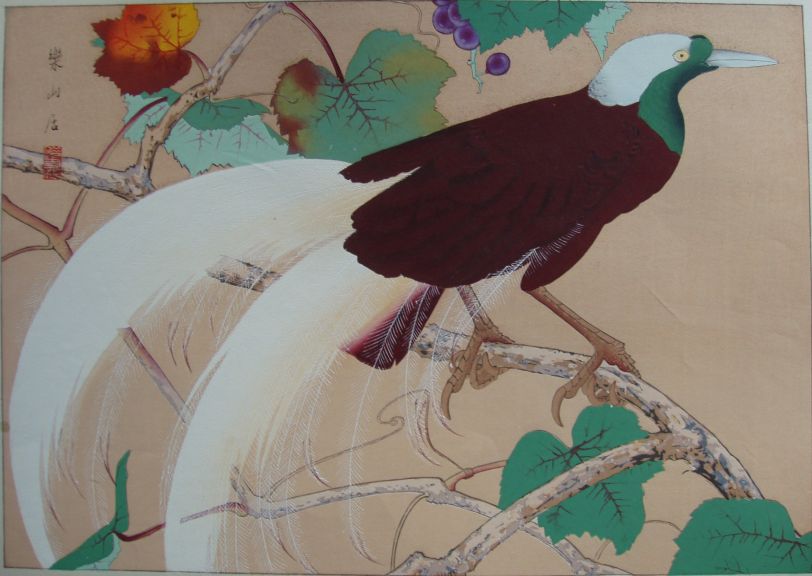 Design History:
This woodblock print was produced from an original painting on silk dating from the late 1920s whose current location is unknown. The indentification of this design as number 32 is original to Rakusan who published the print as the 32nd design in his series of one hundred woodblock prints called 楽山花鳥畫譜, Rakuzan Kachou Gafu, lit. 'Rakusan's Flower and Bird Print Series'. The first printing run of about two hundred copies of 32 was completed and the design published in August 1930 in installment sixteen (of fifty). (The exact printing and publication dates are unknown since no copies of the installment sixteen delivery documents have yet been located.) Additional edition I printings may have continued until 1933. No later edition printings of 32 are currently documented. The copy illustrated here is typical of edition I.

32alt, a woodblock print of an alternate sketch of the same design subject was issued the month before the initial printing of 32 as a preview advertisement (see Related Designs below).

Copies in Public Collections:
Edition I: Honolulu Museum of Art, Honolulu, HI, USA; (1938) 11003 [illustrated online]. Species Illustrated:
Grape, Vitis spp., 葡萄, ぶどう, ブドウ, budou, is usually restricted to the varieties of Vitis vinifera. 野葡萄, 野ぶどう, 野ブドウ, ノブドウ, のぶどう, no-budou, lit. 'field-grape', refers not only to the Wild Grape (as it does here), but also to other vines with grapelike fruits such as the Japanese Ivy, Ampelopsis brevipedunculata var. heterophylla, which Rakusan used in other designs such as 114.


Birds of paradise are familiar exotic birds in zoos and aviaries in Japan and have two currently used general names, 'paradise-bird' and 'wind-bird'. Rakusan selected the first version for Greater Bird of Paradise, Paradisaea apoda, 大極楽鳥, おおごくらくちょう, オオゴクガクチョウ, oo-gokuraku-chou, lit. 'large-paradise-bird'. (Using the other general name this species is called 大風鳥, おおふうちょう, オオフウチョウ, oo-fuu-chou, lit. 'large wind-bird'.) Rakusan owned a stuffed and mounted specimen of this species which was subsequently given to him by an admirer of this print.

Related Designs:
Other designs including grape