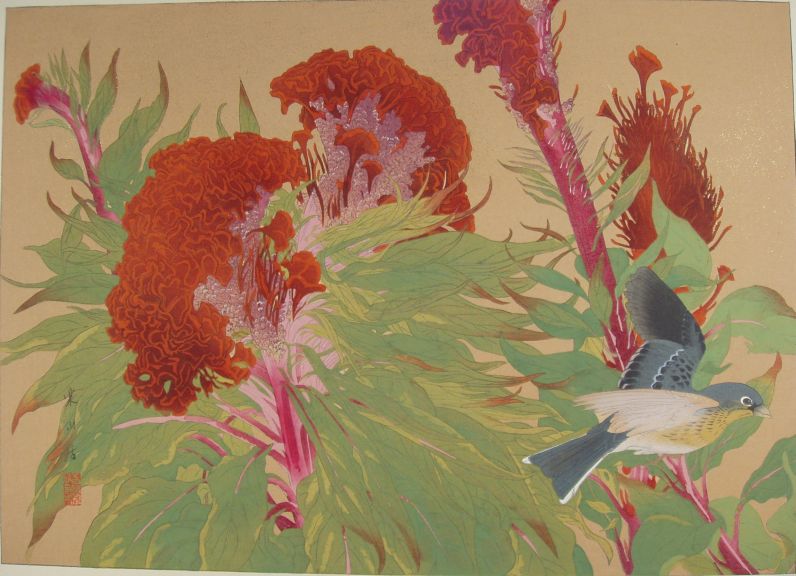 Design History:
This woodblock print was produced from an original painting on silk dating from the late 1920s whose current location is unknown. The indentification of this design as number 35 is original to Rakusan who published the print as the 35th design in his series of one hundred woodblock prints called 楽山花鳥畫譜, Rakuzan Kachou Gafu, lit. 'Rakusan's Flower and Bird Print Series'. The first printing run of about two hundred copies of 35 was completed and the design published in October 1930 in installment eighteen (of fifty). (The exact printing and publication dates are unknown since no copies of the installment eighteen delivery documents have yet been located.) Additional edition I printings may have continued until 1933. The copy illustrated here is typical of edition I. No later edition printings of 35 are currently documented.

Rakusan considered 35 to be one of his best designs and included it in at least four formal presentation albums between 1935 and 1940. (Only one of these albums is known to be in a public collection, see below.)

35alt, a woodblock print of an alternate sketch of the same design subject was issued the month before the initial printing of 35 as a preview advertisement (see Related Designs below).

Copies in Public Collections:
Edition I: Mead Art Museum at Amherst College, Amherst, MA, USA; (AC 2004.151.01) [illustrated online]; from an October 29, 1935 presentation album. Species Illustrated:
Crested Cockscomb, Celosia (argentea var.) cristata, 鶏頭, けいとう, ケイトウ, kei-tou, lit. 'chicken-head', is originally not native to Japan. This name is also used as a general name for all varieties of cockscombs and for the related amaranths. All are old garden imports which have been extensively bred and hybridized in Japan for centuries. These plants were favorite subjects for Rakusan and several diffferent kinds appear in his prints and paintings. Crested Cockscomb is the variety Rakusan illustrates not only in 35; but also in 113-2, 113-3, 113-4, and 113.
[The other related designs show different varieties or species; 113-5, Plumed Cockscomb, Celosia (argentea var.) plumosa, 羽毛ケイトウ, umou-keitou, lit. 'feather-cockscomb; and 113-1 (and 55), Tricolor Amaranth, Amaranthus tricolor, ハゲイトウ, ha-geitou, lit. 'leaf cockscomb'.]

Japanese Yellow Bunting, Emberiza sulphurata, is native to Japan. The name is usually written in Japanese in kana as のぢこ, ノジコ, nojiko; rather than in kanji as 野路子, lit. 'field-road child', or as 野鵐, lit. 'field unspotted-quail', which are read the same way.