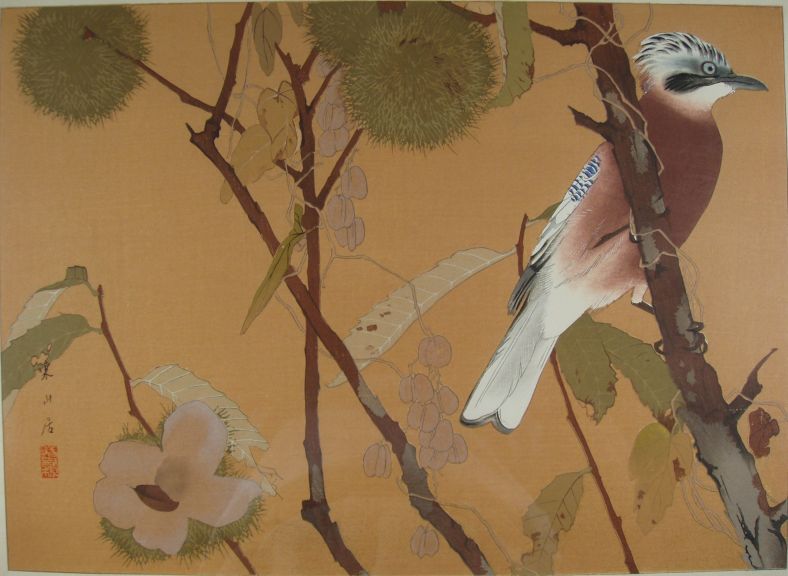 Design History:
This woodblock print was produced from an original painting on silk dating from the late 1920s whose current location is unknown. The indentification of this design as number 36 is original to Rakusan who published the print as the 36th design in his series of one hundred woodblock prints called 楽山花鳥畫譜, Rakuzan Kachou Gafu, lit. 'Rakusan's Flower and Bird Print Series'.

36alt, a woodblock print of an alternate sketch of the same design subject was issued the month before the initial printing of 36 as a preview advertisement (see Related Designs below).

Edition I: The first printing run of about two hundred copies of 36 was completed and the design published in October 1930 in installment eighteen (of fifty). (The exact printing and publication days within that month are unknown since no copies of the installment eighteen delivery documents have yet been located.) At least one additional edition I printing of 36 was made before mid 1933 when the series was completed and and all edition I printing ceased. Almost all of the documented copies of 36 come from these edition I printings, including the two different example copies illustrated at top above and and below left.

A few edition I copies of 36 with city-name stamps show that edition I copies were still available for sale as late as 1947. It is likely that a pre-war edition II reprinting of 36 never became necessary, and to date no edition II copies have been documented.

Edition III: 36 was reprinted in a single, very much smaller, edition III reprinting. Normally edition III reprinting can only be dated between 1948 and 1955, but inclusion of an edition III copy of 36 in the Foster booklet (see below right) indicates a reprinting date at least a few years before the end of that period. Currently, all documented edition III copies of 36 have a Foster era cursive Rakusan romaji signature. 36 is one of the very few Rakusan designs for which any printing details exist, and the Foster booklet reports that 36 required 130 printing impressions to complete.

The two editions of 36 can readily be distinguished by color and technique differences. In edition I the background is an even, opaque, warm tan which is difficult to photograph accurately, and the two edition I examples are actually the same hue. In contrast the edition III background is an uneven, transparent, watery mixture of pale green with brown. There is also dark bokashi shading in the lower central portion. Many of the other colors are also different. Unfortunately, the best currently available edition III image is of a machine-printed reproduction, and a better quality image would be helpful.

Other Foster Information:
36 is among the most familiar Rakusan designs because of Walter Foster. In addition to marketing original Rakusan woodblock prints of 36 from Japan, Foster also sold two grades of reproductions which he had machine-printed in the USA. Both reproduction versions were created from the same original model, an edition III copy of 36 in Foster's personal collection. One version is a fine art reproduction produced for individual sale, and the other appears as page 12 of the Foster booklet.

The fine art reproduction was produced to very high standards of photolithography on good quality, heavy matte paper; and the inks were carefully color-matched to those of the original woodblock print. Because of this attention to detail, it was relatively expensive, few copies were sold, and they are seldom encountered today. Instead, what are mostly offered for sale as reproductions of 36 are actually copies of page 12 cut from the Foster booklet. Regrettably, the booklet was inexpensively and inexactly machine-printed on semi-gloss paper, and its illustration colors are not true to the original. Both reproduction versions are of similar size (listed as 9" x 12"); therefore they are significantly smaller than the original woodblock print (listed as 13" x 18"). (Both reproductions actually maintain the unique proportions of the original woodblock print; so the advertised dimensions are only rough approximations.) Initially, Foster sold original woodblock prints of 36 for $25, fine art reproductions for $3, and the entire booklet (with twenty-seven different designs) for $1. Because the Foster booklet was printed in great numbers and remains widely available today, it is usually much less expensive to buy the entire booklet than a single reproduction cut from it.

Because Foster could not read Rakusan's Japanese title-captions, he made up ones of his own to use in the booklet. There he called 36 "Jay and Chestnuts".

Copies in Public Collections:
Edition I: Museum of Fine Arts, Boston, MA, USA; (1952) 52.501 [not illustrated online]. Species Illustrated:
Japanese Chestnut, Castanea crenata, is a familiar native tree. The Japanese name 栗, くり, クリ, kuri, 'chestnut', is used for this species as well as for any other kinds of chestnut. The descriptor 柴, shiba, 'brushwood', was added to indicate that the tree is growing wild rather than in cultivation.

Japanese Yam, Dioscorea japonica, is the vining plant shown weaving among the chestnut branches from top to bottom in the center of the design. Rakusan included the twining stems, a few leaves, and clusters of the pendant seeds. Today, the native wild Japanese Yam is popularly called 山(の)芋, やま(の)いも, ヤマ(ノ)イモ, yama (no) imo, lit. 'mountain-tuber'. Numerous other names and readings are also common, including ones based on 薯蕷 and 藷蕷 (both lit. 'tuber-tuber'). The general term for any sort of tuber, including taro, the various kinds of potatoes, as well as yams, is 芋, 薯, 藷, 蕷, いも,イモ, imo. Rakusan combined this general name with 蔓, つる, ツル, tsuru, 'creeper, vine', which limits the name to the vining sweet potatoes and yams. Rakusan used the kana transcription いもつる, imo-tsuru, but today 芋蔓, 芋づる, いもづる, イモツル, lit. 'tuber-vine', is read imo-zuru and usually refers to cultivated sweet potato vines.

Japanese Jay, Garrulus glandarius japonicus, 懸(け)巣, かけす, カケス, kakesu, is is one of the Japanese subspecies of the widespread Eurasian Jay, Garrulus glandarius. The Japanese birds have distinctive plumage variations, and the bird Rakusan shows is easily identified as the type he would have encountered wild near his Kyoto home. All Eurasian Jays regularly eat nuts and therefore can often be found in nut trees. The name Rakusan used, 樫鳥, 橿鳥, かしどり, カシドリ, kashi-dori, lit. 'evergreen-oak bird', is one of several popular names playing on the birds' fondness for acorns.