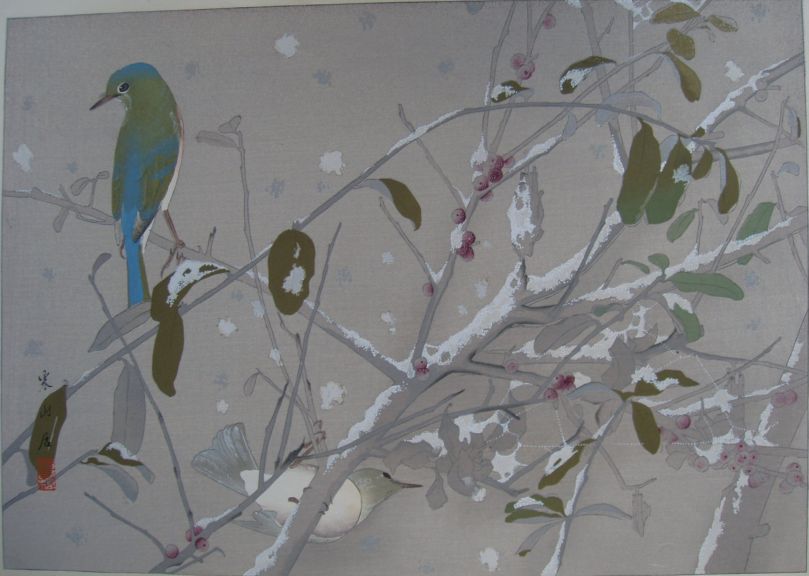 Design History:
This woodblock print was produced from an original painting on silk dating from the late 1920s whose current location is unknown. The indentification of this design as number 37 is original to Rakusan who published the print as the 37th design in his series of one hundred woodblock prints called 楽山花鳥畫譜, Rakuzan Kachou Gafu, lit. 'Rakusan's Flower and Bird Print Series'.

37alt, a woodblock print of an alternate sketch of the same design subject was issued the month before the initial printing of 37 as a preview advertisement.

Edition I: The first printing run of about two hundred copies of 37 was completed and the design published in November 1930 in installment nineteen (of fifty). (The exact printing and publication days in November are unknown since no copies of the installment nineteen delivery documents have yet been located.) At least one additional edition I printing of 37 was made before mid 1933 when the series was completed and and all edition I printing ceased. About than two thirds of the documented copies of 37 come from these edition I printings, including the two different example copies illustrated at top above and and below left.

Rakusan considered 37 to be one of his best designs and included edition I copies of it in at least four formal presentation albums between 1935 and 1940. (Only one of these albums is known to be in a public collection, see below.)

No edition II copies of 37 are currently known. Since good quality edition I copies of 37 were still available as late as 1940, it is unlikely that reprinting an edition II before the studio closure in 1941 would have been necessary.

Many of the ink colors in edition III of 37 are more saturated and the printing more contrastive than in the original edition I. There are also many other differences in color and technique throughout; many of which are especially noticeable on the branches and the leaves at center right. Although difficult to photograph accurately, the background colors in all editions are actually a neutral gray. In edition I the background color is almost even, but in edition III it is paler at top and there is darker bokashi shading over the lower portion.

Edition I: Museum of Fine Arts, Boston, MA, USA; (1952) 52.119 [not illustrated online except as a slightly-cropped greeting card reproduction].

Species Illustrated:
Various kinds of silverberry or oleaster (genus Elaeagnus), 茱萸, 胡頽子, ぐみ, グミ, gumi, are found throughout Japan in a bewildering array of closely related species, subspecies, and cultivars. The tart berries are prized by both people and birds. The variety named by Rakusan as あわどりぐみ (アワドリグミ, awa-dori-gumi) is interpreted to be from 淡鳥茱萸, lit. 'pale bird-silverberry'. This name has not been located in current botanical literature, but it appears to be an apt description since the berries illustrated are small and paler than those of most silverberries. It is tentatively identified here as a form of the common Japanese Silverberry (Autumn-olive, Oleaster, Elaeagnus), Elaeagnus umbellata, 秋茱萸, あきぐみ, アキグミ, aki-gumi, lit. 'autumn-silverberry'.

Although not named in the title-caption, the composition also includes three hanging chrysalides of Bagworm Moth, (family Psychidae), 蓑虫, みのむし, ミノムシ, mino-mushi, lit. 'straw-raincloak insect', whose caterpillars conceal themselves beneath a bag-like cloak of twig and leaf litter. The alternate sketch also includes a hanging chrysalis.

Rakusan reinforced that the season is early winter since although snow is falling, there are still the remnants of a frost-beaded spiderweb in the lower right of the image. The alternate sketch omits the spiderweb.