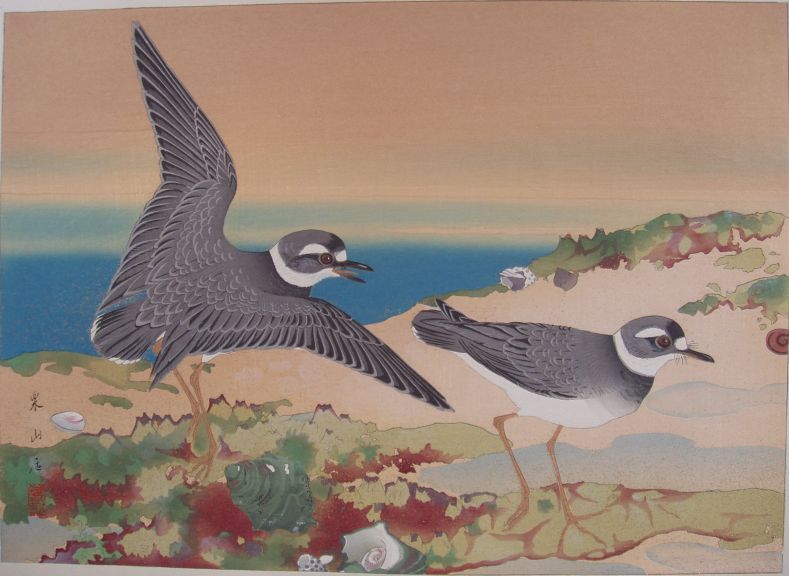 干潮磯にいかるチ鳥 (初春) [on the print*] [(sic) see Species Illustrated below]

Design History:
This woodblock print was produced from an original painting on silk dating from the late 1920s whose current location is unknown. The indentification of this design as number 40 is original to Rakusan who published the print as the 40th design in his series of one hundred woodblock prints called 楽山花鳥畫譜, Rakuzan Kachou Gafu, lit. 'Rakusan's Flower and Bird Print Series'.

40alt, a woodblock print of an alternate sketch of the same design subject, was issued the month before the initial printing of 40 as a preview advertisement.

Edition I: First printing details for 40 are known precisely because copies of the delivery documents for installment twenty have survived. The first printing run of about two hundred copies was completed December 27, 1930 and the publication date was December 28, 1930 in installment twenty (of fifty). At least one additional edition I printing of 40 was produced before the series publication was completed in mid 1933 and all edition I printings ceased. Three different example copies of edition I of 40 are illustrated at the top of the page, below left, and below center.

Edition III: Edition III copies of 40 are seldom encountered and probably represent only a single, small, print run sometime between 1948 and 1955. The editions can be distinguished easily by color differences, especially in the background. In edition III the colors are generally more muted, e.g. the reds and greens of the algae in edition I have been replaced with maroons and olives in edition III. However, for edition III Rakusan introduced a darker and more saturated blue into the sea with graduated bokashi shading up into the sky area. There is also a dark, grayish bokashi shading covering the entire lower portion of the image. An example copy of edition III of 40 is illustrated below right.

In person the background colors in these example images of 40 are more closely similar than they appear here. There is considerable individual variation in the extent and sharpness of the blue bands of color where the sea and sky meet. The addition of a near final impression with watery white highlights on the sand under the wing of the bird on the left and on the seaweed is also variable. The highlighting is most visible in the earliest print run of edition I (example below left) and in the small edition III (example below right). In other copies from edition I the highlighting is either muted or absent entirely (different examples below center and top of page).

Copies in Public Collections:
Edition I: Museum of Fine Arts, Boston, MA, USA; (1951) 51.1739 [not illustrated online]. Species Illustrated:
Typically, Rakusan did not mention physical features in his title-captions. However, here he included the expression 干潮磯, kanchou iso, literally 'lowtide seashore' to describe the setting. It is also one of the very few designs which show a geophysical feature in the background; in this instance the sea. The constellation of species shown in 40 confirms that this is a strictly saltwater, marine environment. As such, 40 (and 40alt) are the only designs in this series which could not have been sited within the inland city of Kyoto where Rakusan lived. Additionally, 40 includes more different biological species than any other Rakusan artwork.

The beach tideline in 40 appears to be primarily a single variety of seaweed or algae. Firm identification of seaweed washed up on a beach is difficult, but the illustration is entirely compatible with Sea Lettuce, Ulva spp., 石蓴, あおさ, アオサ, ao-sa. Sea Lettuce is collected and used for food in Japan, and Rakusan would have been familiar with it both fresh and dried. Unfortunately, 40 is one of only a few designs in this series which mentions no botanical in the title-caption.

Long-billed (Ringed) Plover, Charadrius placidus, 桑鳲千鳥, 斑鳩千鳥, 鵤千鳥, いかるちどり, イカルチドリ, ikaru-chidori, lit. 'great-billed plover', is a native Japanese species. Rakusan includes two birds, suggesting a mated pair in this season, but since the sexes are alike it could be any two birds. The general name for any plover is 千鳥, ちどり, チドリ, chi-dori, lit. 'thousand-bird'. However, the title-caption for 40 as it appears on the woodblock print includes an incorrect substitution of katakana チ in place of the correct kanji 千 (both read chi) . Note that the name is spelled correctly in the installment twenty documentation on the folio envelope, and also on 83 (see Related Designs below).

In writing ikaru in kana Rakusan left open the erroneous interpretation of ikaru as 怒 'to get angry' which is an unrelated word with the same pronunciation. The construction of the name is not 'angry plover', and the birds are not fighting. In ornitholological usage ikaru refers to the bill, as in ikaru 'grosbeak' (a species of finch shown in design 33), and the etymology of the actual name is more correctly 'grosbeak plover'.

Washed up in the tideline are the remains of seven marine mollusks. Although Rakusan does not mention any of them in the title-caption, all can be at least tentatively identified:

At far left next to the signature is an articulated bivalve, clearly a kind of clam (Family Veneridae). It would not be possible to identify the species solely from 40, but apparently Rakusan only used one variety of clam in all of his other artworks including 40alt. Taking all the Rakusan examples of clams together it is possible to identify the single species as Common Orient Clam, Meretrix lusoria, 蚌, 蛤, 文蛤, はまぐり, ハマグリ, hamaguri.

At the lower margin just above the caption are two large marine snails of the same species of turban shell (Family Turbinidae). Horned Turban Shell, Turbo (Batillus) cornutus, 拳螺, 栄螺, 蠑螺, さざえ, サザエ, sazae, is a farmed delicacy in Japan easily obtainable in markets for use as models.

At bottom between the turban shells and in above center are each of two smaller, dark-spotted white, marine snails of the same species of dove shell (Family Columbellidae). Tortoise Dove Shell, Pardalinops (Pyrene) testudinaria tylerae, 松虫貝, まつむしがい , マツムシガイ, matsu-mushi-gai, is unmistakable and is a shell collector favorite.

Above center and right of the second dove shell is a single small dark marine snail which can tentatively be identified as a periwinkle (Family Littorinidae). Periwinkle, Littorina brevicula, 玉黍貝, たまきびがい, タマキビガイ, tama-kibi-gai, is an extremely common species which is also eaten in Japan and is therefore readily available in markets.

At the center right margin is a small brown marine snail (shown looking directly at the spiral top) which can be identified as a top shell (Family Trochidae), so-called from resemblance to the spinning toy. Button Top Shell, Umbonium moniliferum, 疣喜佐古, いぼきさご, イボキサゴ, ibokisago, is another unmistakable common species.