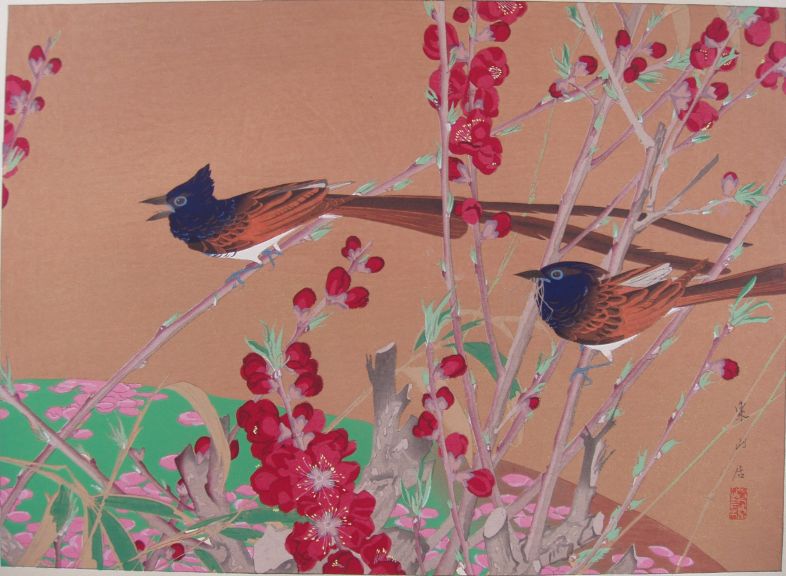 Design History:
This woodblock print was produced from an original painting on silk dating from the late 1920s whose current location is unknown. The indentification of this design as number 41 is original to Rakusan who published the print as the 41st design in his series of one hundred woodblock prints called 楽山花鳥畫譜, Rakuzan Kachou Gafu, lit. 'Rakusan's Flower and Bird Print Series'.

Rakusan considered 41 to be one of his best designs and included it in at least three formal presentation albums in 1940. No later edition printings of 41 are currently known. Since good quality edition I copies of 41 were still available in 1940, it is likely that an edition II reprinting between then and the closure of the studio would have been unnecessary.

The background of 41 is highly stylized. The upper portion is a warm, featureless tan, but the ground beneath the tree is shown as an abstract arc colored in rich brown and bright jade green. The juxtaposition of the green with the pink of the fallen petals makes the colors vibrantly Art Deco.

Foster Information:
41 is among the most familiar Rakusan designs because of Walter Foster. In addition to marketing original Rakusan woodblock prints of 41 from Japan, Foster also sold two grades of reproductions which he had machine-printed in the USA. Both reproduction versions were created from the same original model, an edition I copy of 41 in Foster's personal collection. One version is a fine art reproduction produced for individual sale, and the other appears as page 19 of the Foster booklet.

Because Foster could not read Rakusan's Japanese title-captions, he made up ones of his own to use in the booklet. Most of these Foster labels are inaccurate at best. However, here he called 41 "Japanese Paradise Flycatcher and Flowering Red Peach", which except for the order of elements and omission of the season is essentially correct.

Included in the composition at the bottom, but not mentioned in the title-caption, are slender stalks of an unidentified kind of bamboo. Some of the leaves appear all or partially brown as though left over from the previous season.

Japanese (Black) Paradise-flycatcher, Terpsiphone atrocaudata, 三光鳥, さんこうちょう, サンコウチョウ, san-kou-chou, lit. '3-light/ray-bird', is a Japanese native species. The sexes are similar except that the males have long tail streamers and the females do not. Here Rakusan has shown the tail of the bird on the right extending out of the frame; so its sex is actually indeterminate. However, given the season, the implication is of a mated pair, and the bird on the left is unmistakably male. The likely female bird on the right is carrying a small bundle of fibers (presumably for a nest).

Other designs with other kinds of peach: