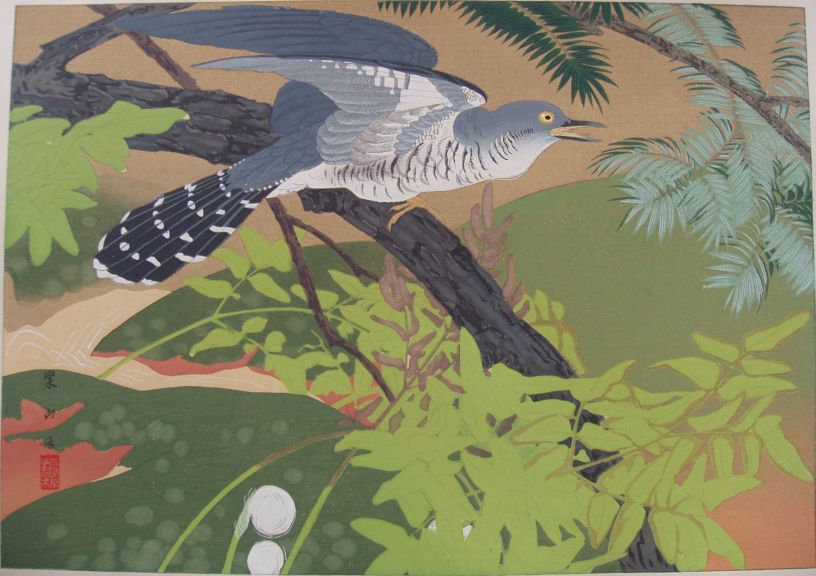 Design History:
This woodblock print was produced from an original painting on silk dating from the late 1920s whose current location is unknown. The indentification of this design as number 48 is original to Rakusan who published the print as the 48th design in his series of one hundred woodblock prints called 楽山花鳥畫譜, Rakuzan Kachou Gafu, lit. 'Rakusan's Flower and Bird Print Series'. Initial edition I publication of 48 was in April 1931 (or perhaps slightly later) in installment twenty-four (of fifty). However, additional edition I printings of 48 may have continued until as late as 1933. The copy illustrated here is typical of edition I. No later edition copies of 48 are currently known.

48 is one of the few designs in this series which include any distant physical features as part of the background. Here rust and green areas are intended to indicate earth and low vegetation near a small, rapidly flowing, stream.

Copies in Public Collections:
Edition I: Museum of Fine Arts, Boston, MA, USA; (1951) 51.2481 [not illustrated online]. Species Illustrated:
Japanese Royal Fern (Japanese Flowering Fern), Osmunda japonica, 薇, ぜんまい, ゼンマイ, zenmai, is a Japanese native fern. The young coiled shoots (or fiddleheads) are shown in lower center together with mature fronds. The fiddleheads are eaten in Japan and elsewhere as a vegetable. The kanji is also used in other expressions which mean 'spring, coil'.

Japanese Torreya (Japanese Nutmeg Tree), Torreya nucifera, 榧, かや, カヤ, kaya, is a Japanese native tree which produces edible fruit (not shown). Although the bird is sitting on a torreya branch, and its foliage appears prominently in the upper right of the composition, Rakusan omitted mention of the species in the title-caption.

Common (Eurasian) Cuckoo, Cuculus canorus, is a native Japanese bird. Cuckoos are culturally important and there are many Japanese names for them; some of which are primarily literary or poetic. Rakusan illustrated this species in three designs, 48, 14alt, and 14 (see links below). Oddly, Rakusan used different names in the title-captions which raises the question if this indicates that he had intended to include two different kinds of birds. However, both names he used apply to the same species, and both illustrations are consistent with identification as Common Cuckoo. In 48 Rakusan used 閑古鳥, かんこ鳥, かんこどり, カンコドリ, kanko-dori, lit. 'cuckoo bird', which like the English name is an onomatopoetic rendition of its call. In 14 Rakusan instead used 郭公, かっこう, カッコウ, kakkou, 'cuckoo', which has a similar derivation and is the ornithologically preferred name today.

Related Designs:
Other designs with cuckoos: