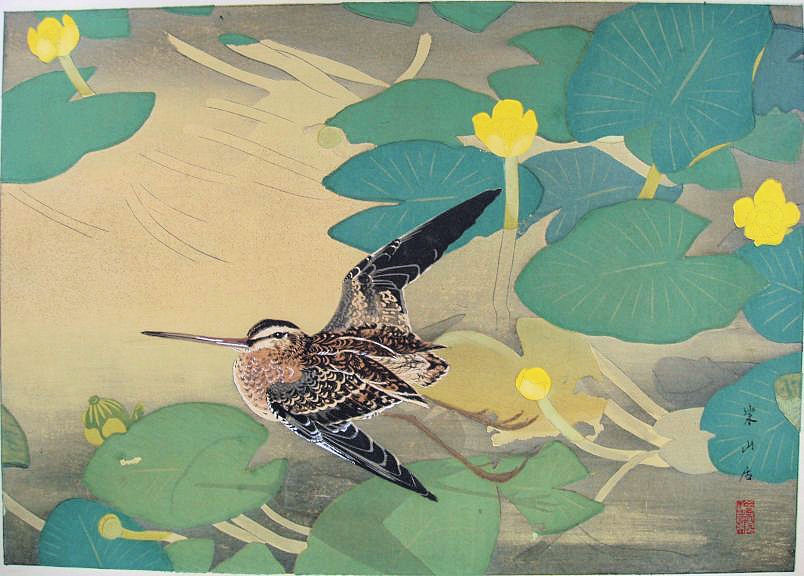 Design History:
This woodblock print was produced from an original painting on silk dating from the late 1920s whose current location is unknown. The indentification of this design as number 51 is original to Rakusan who published the print as the 51st design in his series of one hundred woodblock prints called 楽山花鳥畫譜, Rakuzan Kachou Gafu, lit. 'Rakusan's Flower and Bird Print Series'.

Edition II: 51 was reprinted in at least one print run sometime during the period between 1936 and 1941. About one third of the documented copies of 51 come from edition II reprintings, including the example illustrated below center. An edition II copy of 51 was part of a Rakusan presentation album from August 1941.

Edition III: The relative scarcity of edition III copies of 51 suggests that only a single, much smaller, print run was produced sometime in the period between 1948 and 1955. For edition III in addition to changing the seal Rakusan moved the signature and seal combination up and to the left to accommodate including a cursive romaji signature below it. The presence of this Foster era cursive Rakusan romaji signature at bottom within the image area is a diagnostic marker for this edition. The copy illustrated below right is a typical example of edition III of 51.

There are slight differences in ink color and technique which distinguish all three editions when closely compared. However, it is very difficult to photograph the pale background colors accurately, and the hues in edition I and edition II are more similar than they appear in these examples. Within each edition there are individual variations in the amount and extent of the bands of bokashi shading at top and bottom. Similar individual differences in the shadings are noticeable in the treatments of the underwater stems, especially those at upper left in the design. Edition III hues are generally noticeably different from those used in the earlier editions. As a result there is usually more contrast, as for example the veins in the leaves in edition III.

Species Illustrated:
Japanese Spatterdock, Nuphar japonicum, 河骨, こうほね, コウホネ, kouhone, are common waterplants in Japan. Closely similar species are found in much of the northern hemisphere. There are many common name variants in English which are sometimes applied to the Japanese species as well: Yellow (Bullhead) Lotus, Candock, Nuphar, etc.

Common Snipe (Paddyfield Snipe), Gallinago (Capella) gallinago, 田鴫, 田鷸, たしぎ, タシギ, ta-shigi, lit. 'field shorebird', is a Japanese native species. Historically, 鴫 can be translated as 'snipe', but it is more often today rendered as 'sandpiper'. A better English equivalent is 'shorebird' since the meaning actually includes any bird in the families Scolopacidae or Rostratulidae. Exact species identification among the various closely similar snipes is notoriously difficult in the field, and from an artwork it is almost impossible. Therefore here the exact species designation for 51 relies almost entirely on Rakusan's use of the name 田鴫 in the title-caption rather than on the elements of his illustration. References to modern wildlife photographs suggest that Rakusan created 51 using sketches of a dead snipe rather than from observation of a living one. The positionings of the head, feet, and back feathers are all unnatural ones.

Comparison with the snipe shown in 125 is also problematic since that bird is in winter plumage and would be expected to look different even if it were the same individual bird. Although the pose in 125 is much more lifelike, the plumage is rendered with more artistic license and in less detail than in 51. The details Rakusan chooses to enhance in 125 suggest that snipe is a different, slightly larger, species, Japanese Snipe (Latham's Snipe), Gallinago (Capella) hardwickii. In the folio title Rakusan used 鴫 'snipe, shorebird', alone as a general name, making it unclear whether or not a particular species was intended.