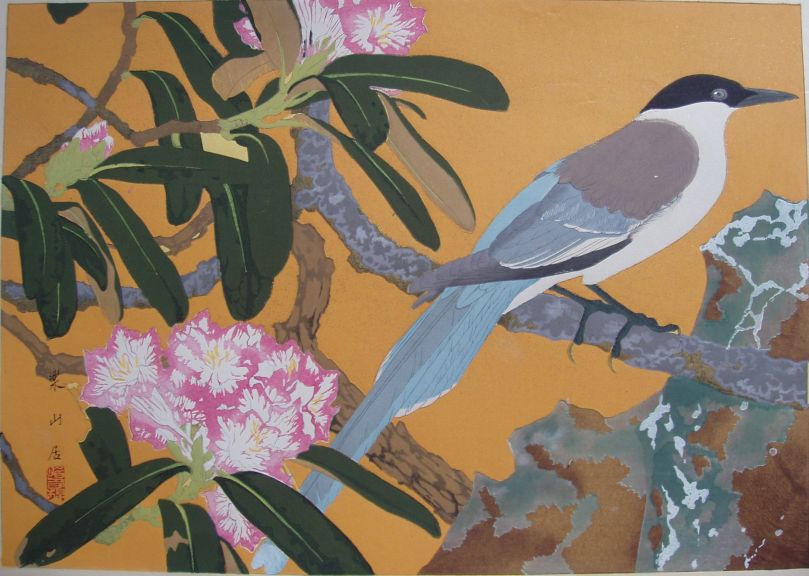 Design History:
This woodblock print was produced from an original painting on silk dating from the late 1920s whose current location is unknown. The indentification of this design as number 52 is original to Rakusan who published the print as the 52nd design in his series of one hundred woodblock prints called 楽山花鳥畫譜, Rakuzan Kachou Gafu, lit. 'Rakusan's Flower and Bird Print Series'. Initial edition I publication of 52 was in June 1931 (or perhaps slightly later) in installment twenty-six (of fifty). However, additional edition I printings of 52 may have continued until as late as 1933. The copy illustrated here is typical of edition I. No later edition printings of 52 are currently known.

All copies of 52 have noticeable printing flaws. Most of these errors are near the vegetation where the block carver misunderstood parts of the design. The most obvious of these is a paler rectangle in the center of the upper left quadrant which should be the same color as the rest of the tan background. Apparently, different attempts to infill a matching color were not entirely successful, and these corrections vary slightly in color from copy to copy. Also a nick on the wooden block for the shoulder of the bird has left a small white spot without gray overprinting.

This design is one of only two in this series which show large, decorative garden rocks as part of the compositions. The other is at number 21.

Foster Information:
52 is among the most familiar Rakusan designs because of Walter Foster. In addition to marketing original Rakusan woodblock prints of 52 from Japan, Foster also sold two grades of reproductions which he had machine-printed in the USA. Both reproduction versions were created from the same original model, an edition I copy of 52 in Foster's personal collection. One version is a fine art reproduction produced for individual sale, and the other appears as page 18 of the Foster booklet.

The fine art reproduction was produced to very high standards of photolithography on good quality, heavy matte paper; and the inks were carefully color-matched to those of the original woodblock print. Because of this attention to detail, it was relatively expensive, few copies were sold, and they are seldom encountered today. Instead, what are mostly offered for sale as reproductions of 52 are actually copies of page 18 cut from the Foster booklet. Regrettably, the booklet was inexpensively and inexactly machine-printed on semi-gloss paper, and its illustration colors are not true to the original.

Because Foster could not read Rakusan's Japanese title-captions, he made up ones of his own to use in the booklet. Here he called 52 "Japanese Magpie Golden Flowered Rhododendron", but the flowers are actually pink.

Copies in Public Collections:
Edition I: Museum of Fine Arts, Boston, MA, USA; (1952) 52.116 [not illustrated online]. Species Illustrated:
Rhododendron, Rhododendron spp., 石南花, 石楠花, しゃくなげ, シャクナゲ, shakunage, lit. 'stone-south-flower', are common garden shrubs in Japan and throughout the world. There are several native species, but most plants encountered in gardens are selected cultivars and hybrids. The picotee flowers indicate that the specimen Rakusan shows is a hybrid, but the exact form may never be identified by name.

Azure-winged Magpie, Cyanopica cyanus, is properly 尾長, おなが, オナガ, onaga, lit. 'long-tailed (bird)'. Although it is found wild in Japan, the bird Rakusan shows was probably an aviary specimen. Rakusan did not use this species particular name in his title-caption. Instead he used 鵲, かささぎ, カササギ, kasasagi, which today is normally applied only to a different species, Black-billed Magpie, Pica pica, which is often simply called Magpie. It is likely that Rakusan was not familiar with either bird in the wild and was using the name 'magpie' in a general sense.

Related Designs:
Other design with another species of magpie: