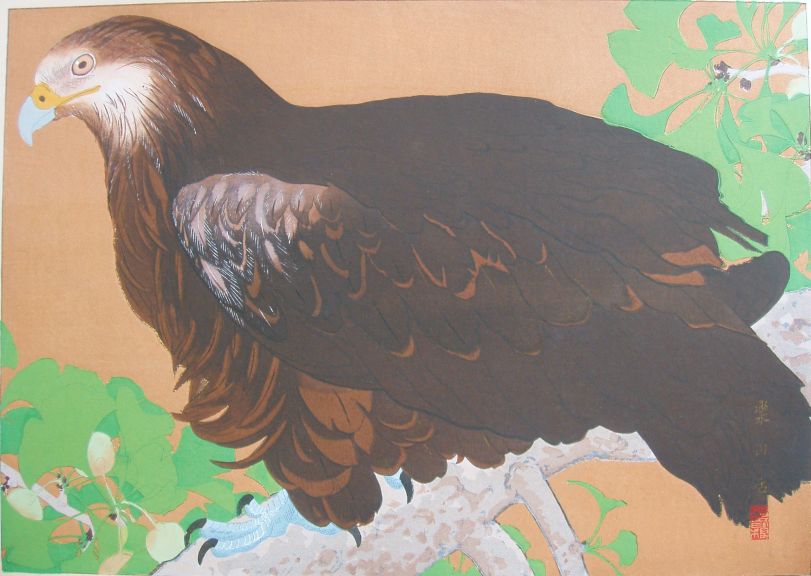 This design is only one of two in the series where the signature is printed in gold ink instead of the usual black.

Design History:
This woodblock print was produced from an original painting on silk dating from the late 1920s whose current location is unknown. The indentification of this design as number 53 is original to Rakusan who published the print as the 53rd design in his series of one hundred woodblock prints called 楽山花鳥畫譜, Rakuzan Kachou Gafu, lit. 'Rakusan's Flower and Bird Print Series'. Initial edition I publication of 53 was in July 1931 (or perhaps slightly later) in installment twenty-seven (of fifty). However, additional edition I printings of 53 may have continued until as late as 1933. The copy illustrated here is typical of edition I. No later edition printings of 53 are currently known. Copies in Public Collections:
Edition I: Amherst College Library (Soffer Ornithology Collection), Amherst, MA, USA; [not illustrated online]. Species Illustrated:
Gingko (Maidenhair Tree), Gingko biloba, 銀杏, 公孫樹, 鴨脚樹, いちょう, イチョウ, ichou, is an originally Chinese species which has long been grown in Japan. The immature, pale green, oval fruit are visible among the foliage.

Black Kite, Milvus migrans, 鳶, と(ん)び , ト(ン)ビ, to(n)bi, lit. 'kite (bird)', is a common Japanese native species. Large numbers of Black Kites are usually seen all year along the rivers in downtown Kyoto, and the species would be well known to Rakusan. (This bird in 53 is often mistakenly thought to depict an eagle, but the physical characteristics and the explicit original title-caption indicate that it is indeed a Black Kite.)