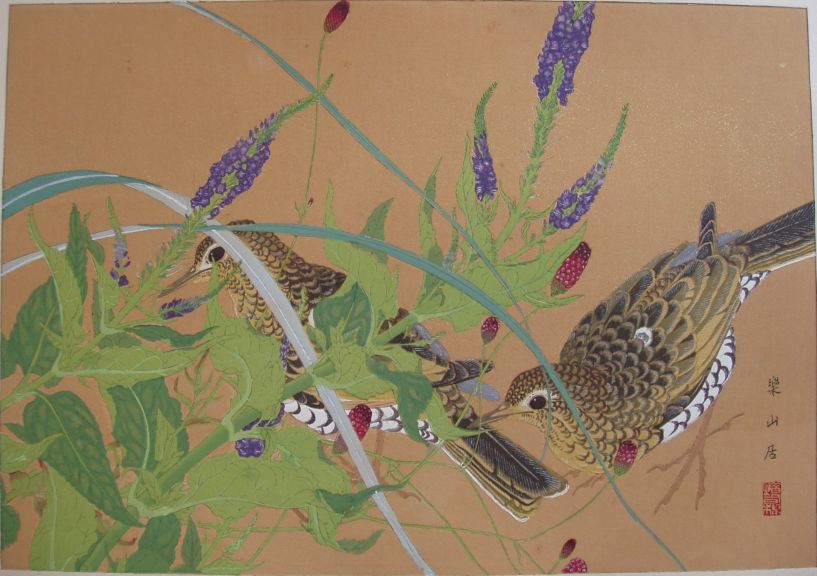 Design History:
This woodblock print was produced from an original painting on silk dating from the late 1920s whose current location is unknown. The indentification of this design as number 56 is original to Rakusan who published the print as the 56th design in his series of one hundred woodblock prints called 楽山花鳥畫譜 Rakuzan Kachou Gafu, lit. 'Rakusan's Flower and Bird Print Series'. Initial edition I publication of 56 was in August 1931 (or perhaps slightly later) in installment twenty-eight (of fifty). However, additional edition I printings of 56 may have continued until as late as 1933. The copy illustrated here is typical of edition I.

At least one later edition printing of 56 is known, but it has not been possible to examine original copies to determine the edition-diagnostic watermark. Therefore it is not known if these later edition copies represent edition II from approximately between 1936 and 1941 or edition III from between 1948 and 1955. The scarcity of examples suggests the smaller print runs of edition III. In edition I the background is an overall warm tan color, in the later edition it is a lighter beige with gray bokashi shading in the lower portion.

56 is one of the very few Rakusan designs for which any printing details exist. The Foster booklet reports that 56 required 180 printing impressions to complete.

Other Foster Information: 56 is among the most familiar Rakusan designs because of Walter Foster. In addition to marketing original Rakusan woodblock prints of 56 from Japan, Foster also sold two grades of reproductions which he had machine-printed in the USA. Both reproduction versions were created from the same original model, a later edition copy of 56 in Foster's personal collection. One version is a fine art reproduction produced for individual sale, and the other appears as page 28 of the Foster booklet.

The fine art reproduction was produced to very high standards of photolithography on good quality, heavy matte paper; and the inks were carefully color-matched to those of the original woodblock print. Because of this attention to detail, it was relatively expensive, few copies were sold, and they are seldom encountered today. Instead, what are mostly offered for sale as reproductions of 56 are actually copies of page 28 cut from the Foster booklet. Regrettably, the booklet was inexpensively and inexactly machine-printed on semi-gloss paper, and its illustration colors are not true to the original. The booklet illustration has an overall yellow tinge; the original background of Foster's copy is a neutral beige, not yellow.. Both reproduction versions are of similar size (listed as 9" x 12"); therefore they are significantly smaller than the original woodblock print (listed as 13" x 18"). (Both reproductions actually maintain the unique proportions of the original woodblock print; so the advertised dimensions are only rough approximations.) Initially, Foster sold original woodblock prints of 56 for $25, fine art reproductions for $3, and the entire booklet (with 27 different designs) for $1. Because the Foster booklet was printed in great numbers and remains widely available today, it is usually less expensive to buy the entire booklet than a single page reproduction.

Because Foster could not read Rakusan's Japanese title-captions, he made up ones of his own to use in the booklet. Here he called 56 "Dushy Ouzel" (presumably intending "Dusky").

Species Illustrated:
56 is unusual in that three different botanical elements are included, and that two of these are named in the title-caption.

Japanese Speedwell, Veronica subsessilis, 瑠璃虎の尾, るりとらのお, ルリトラノオ, ruri tora-no-o, lit. ' lapis-lazuli tiger('s) tail', is one of several species called speedwells in English. The Japanese name is also applied to Garden Speedwell, Veronica longifolia, which was formerly considered part of the same species. Rakusan instead used the more general name, 乕乃尾 (which would today be written 虎の尾), tora-no-o, lit. 'tiger('s) tail' which has been applied to many different, unrelated plants and is therefore currently ambigous.

Also included in the design, but not mentioned in the title caption, is an as yet unidentified grass with very long leaves. The leaves are shown as medium green on the top with a lighter midrib, and a silver-gray underside. Note that similar grass is present also with Garden Burnet in 131-5 (see link below).

Related Designs:
Other designs with garden burnet (and similar grass):