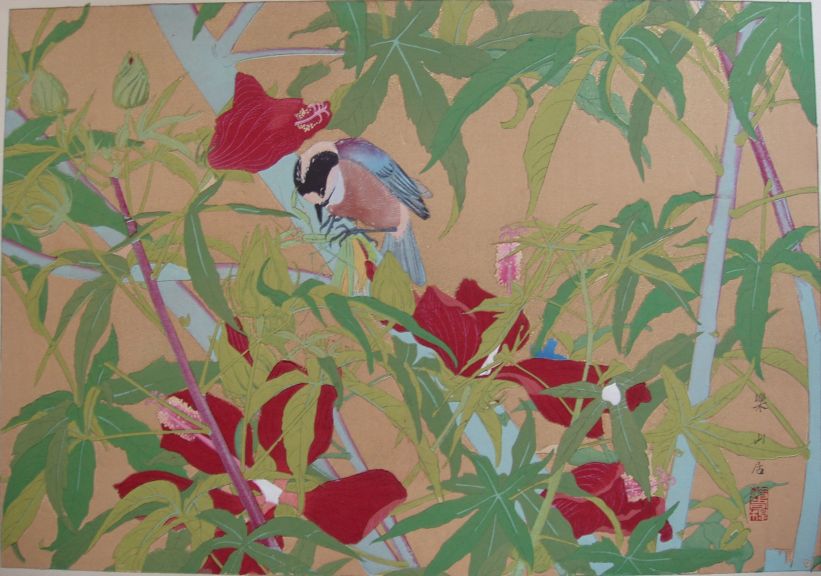 Design History:
This woodblock print was produced from an original painting on silk dating from the late 1920s whose current location is unknown. The indentification of this design as number 57 is original to Rakusan who published the print as the 57th design in his series of one hundred woodblock prints called 楽山花鳥畫譜 Rakuzan Kachou Gafu, lit. 'Rakusan's Flower and Bird Print Series'. Initial edition I publication of 57 was in September 1931 (or perhaps slightly later) in installment twenty-nine (of fifty). The copy illustrated here is typical of edition I.

The design for 57 is highly complex. It was obviously very difficult to interpret the key-block outline prints used to guide carving the wooden printing blocks, since several small carving mistakes were made. Fortunately, most of these errors go unnoticed in the overall complexity of the design, athough there are actually nearly two dozen of them. It was also very difficult to print 57, and apparently only the initial printing of about two hundred copies was ever made. No later edition printings of 57 are currently known, and it is probable that none exist.

The subjects included in the other Red Swamp Mallow designs are unusually close to those of 57. It is possible that these later designs represent reworkings of some of the now-lost rough sketches for 57 from the late 1920s.

Species Illustrated:
Red Swamp Mallow (Scarlet Rose-mallow, Texas Star), Hibiscus coccineus, is native to the southeastern United States and has many English common names. It has become a favorite exotic garden plant in Asia because of its brilliant scarlet red flowers and its interesting, highly-dissected leaves. One of its Japanese names is based on its resemblance to the Japanese maple when in red autumn coloration, 紅葉葵, もみじあおい, モミジアオイ, momiji-aoi, lit. 'red-leaf mallow'. This name is the one most commonly encountered today.

In its leaves, growth habit, and environmental preferences Red Swamp Mallow closely resembles Sunset Hibiscus, Abelmoschus manihot. That originally Southeast Asian exotic species has long been cultivated in Japan for both food and decorative flowers and has many names. One of those names, 黄蜀葵, ou-shok-ki, lit. 'yellow Sichuan (Szechuan) mallow', was later adapted as a Red Swamp Mallow name by altering the color descriptor. Here Rakusan uses that derived name, 紅蜀葵, こうしょっき, コウショッキ, kou-shok-ki (or こうしょくき, コウショクキ, kou-shoku-ki), lit. 'red/scarlet Sichuan mallow'. (Although both similar species are in the Malvaceae family, the two are not in the same genus and are not all that closely related. The derived name also implies an incorrect Sichuan origin for Red Swamp Mallow.) Rakusan used both species as his 134 Cut-leaf Mallow (shokki) theme. There Red Swamp Mallow appears in 134-1, 134-5, and 134; and Sunset Hibiscus in 132-2, 134-3, and 134-4.

Varied Tit, Parus varius, 山雀, やまがら, ヤマガラ, yama-gara, lit. 'mountain tit', is a familiar native species. Although commonly encountered, the reading of 山雀 as やますずめ, ヤマスズメ, yama-suzume, lit. 'mountain sparrow', is today considered incorrect. This reading is the source of the translated name 'Japanese Mountain Sparrow' used on the insert for a greeting card reproduction of 79 where it is wrongly applied to a different species of tit (q.v.).

Rakusan was fond of portraying these active little birds, and they occur in several different designs. Varied Tit appears again paired with Red Swamp Mallow in 134-3, and with Sunset Hibiscus in 134-4.

Rakusan was arguably better known early in his career as a painter of detailed insects. Most renditions of insect life in his designs are identifiable as to genus, if not also to species.

The prey of the tit is not mentioned in the title-caption, but is clearly a Narrow-winged Mantis, Tenodera angustipennis. This Japanese native insect has many names, of which 蟷螂, 螳螂, 鎌切, かまきり, カマキリ, kamakiri, is perhaps most recognizable. The mantis appears with Red Swamp Mallow also in 134-1.

Rakusan's attention to detail may be seen in his subtle inclusion of a spider's egg sac in center lower right. It appears as an inverted, white, heart-shape in the base of a leaf. The spun silk sac is held there by more than a dozen white silk strands crossing the adjacent leaf lobes. Its form may be sufficiently distinctive to identify at least the family responsible.

Just above and to the left of the egg sac is what is usually guessed to be a "blue butterfly". Although this is the only area within this design where this particular color of blue ink is currently visible, other areas in the composition could have this same blue ink as an underprinting. Failure to overprint with the correct color could be a printing error (probably from another of the many block carving mistakes for this design). The blue area is underprinted with a set of sub-parallel lines perhaps meant to indicate veining.

Rakusan often included butterflies in his designs, but everywhere else he shows their bodies and other distinctive details missing here. Of course in Japan there are several species of small blue butterflies, but none is a possible match. Not only are their wings all differently shaped, but also the veins in their wings go in a different direction from those seen here. It is more likely that the blue area was instead intended to be a portion of some sort of vegetation, but the exact subject remains unclear.