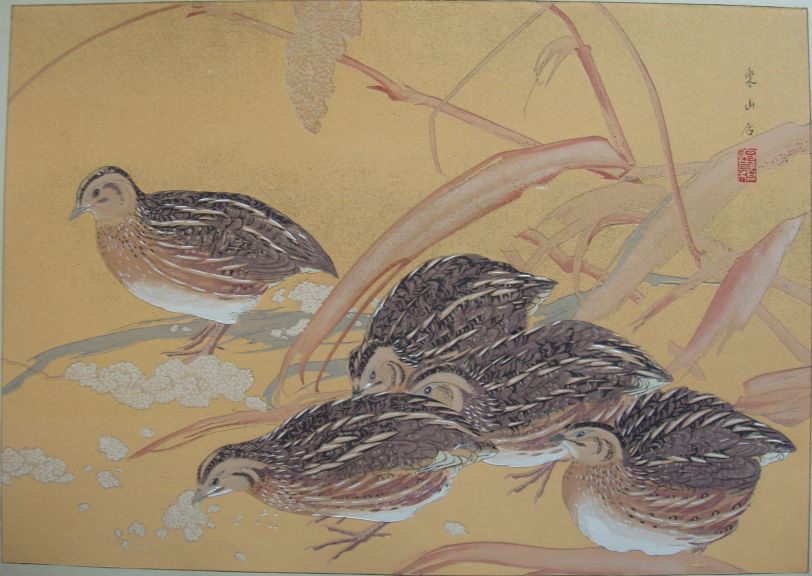 Design History:
This woodblock print was produced from an original painting on silk dating from the late 1920s whose current location is unknown. The indentification of this design as number 59 is original to Rakusan who published the print as the 59th design in his series of one hundred woodblock prints called 楽山花鳥畫譜, Rakuzan Kachou Gafu, lit. 'Rakusan's Flower and Bird Print Series'.

No edition II copies of 59 are currently known.

Edition III: 59 was reprinted in smaller edition III print runs to produce numbers nearly equal to those from edition I. Edition III copies account for nearly half of all documented copies. Normally, edition III reprinting can only be dated between 1948 and 1955. However, inclusion of an edition III copy of 59 in the Foster booklet (see below) indicates a first edition III reprinting date at least a few years before the end of that period. Currently, all documented edition III copies of 59 have a Foster era cursive Rakusan romaji signature, including the example below right. 59 is one of the very few Rakusan designs for which any printing details exist, and the Foster booklet reported that 59 required 150 printing impressions to complete.

Edition I and edition III of 59 can easily be distinguished by color and technique differences. For example, in edition I the background is an opaque rich tan, and the shading on the plants is a rusty-redbrown. In edition III that background is replaced with an almost transparent pale gray with areas of darker gray bokashi, and the shading on the plants is a vibrant maroon. Many of the other ink colors also differ in hue and contrast. Note that the range of tan colors Rakusan used during the edition I period on the backgrounds of several different designs is very difficult to photograph with any color fidelity. The backgrounds of the two different edition I examples are actually the same hue.

Other Foster Information:
59 is among the most familiar Rakusan designs because of Walter Foster. In addition to marketing original Rakusan woodblock prints of 59 from Japan, Foster also sold two grades of reproductions which he had machine-printed in the USA. Both reproduction versions were created from the same original model, an edition III copy of 59 in Foster's personal collection. One version is a fine art reproduction produced for individual sale, and the other appears as page 20 of the Foster booklet.

Because Foster could not read Rakusan's Japanese title-captions, he made up ones of his own to use in the booklet. Here he called 59 "Quail".

Species Illustrated:
Foxtail Millet, Setaria italica, 粟, あわ, アワ, awa, 'millet', is an originally exotic agricultural grain long grown in Japan for food. Rakusan added 穂 ho which in this context means 'ear or seedhead (of a plant such as a grass or a grain)'.