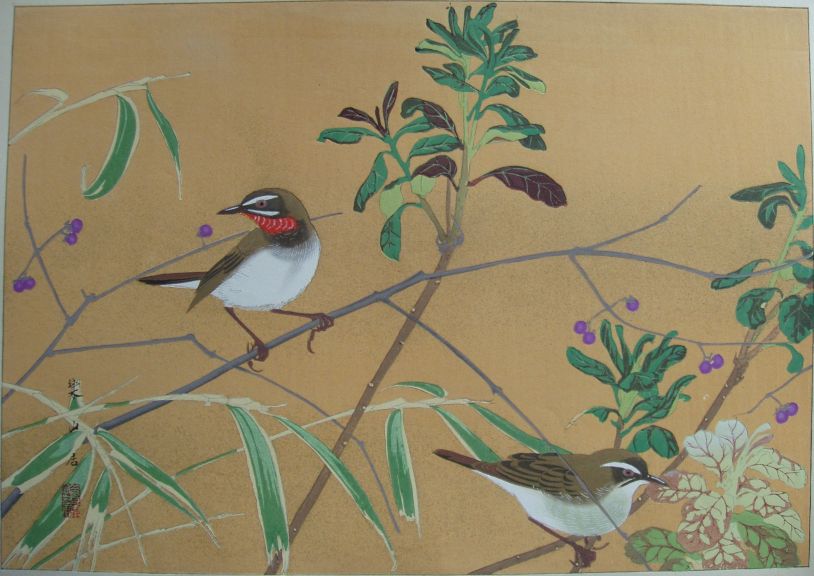 *60 is one of only a very few designs where edition III is printed on leftover edition II paper.

Design History:
The indentification of this design as number 60 is original to Rakusan who published the print as the 60th design in his series of one hundred woodblock prints called 楽山花鳥畫譜 Rakuzan Kachou Gafu, lit. 'Rakusan's Flower and Bird Print Series'.

Edition I: Initial printing and publication of about two hundred edition I copies of 60 was in October 1931 (or perhaps slightly later) in installment thirty (of fifty). However, at least one additional full edition I reprinting was made before mid 1933 when the series was completed and and all edition I printing ceased. More than three quarters of the documented copies of 60 come from these edition I printings, including the two different example copies illustrated at top and below left. (Note that the warm tan background Rakusan used for edition I is very difficult to photograph with any accuracy, and the backgrounds in these two examples are actually the same color in person.)

For edition III Rakusan made several changes in color, including completely replacing the background and increasing the saturation of many hues, especially the reds and greens. He also changed both the signature and seal and raised their location within the image. Most copies of edition III of 60 have secondary Foster era Rakusan cursive romaji signatures, including the different copies illustrated at center and at right below.

Two different edition III copies of 60 are illustrated immediately above. Both copies once looked very much like the example at center, and the example at right has been severely damaged from a botched attempt at restoration. Rakusan mixed his own inks, and some areas in every design are known to be very soluble in at least one of the various solvents commonly used in restorations. Unfortunately, in order to address condition problems the entire print was immersed in a solvent bath. Several of the colors, including all of those on the berries as well as most of the viridian greens of the foliage, have simply dissolved or floated away. Note that the viridian pigment is not sensitive to sun or chemical damage and cannot just have faded. The damaged copy is still interesting since it now shows hints of how Rakusan achieved his final effects using underprintings of sometimes very different colors, but it is otherwise ruined. It remains a sad object lesson illustrating the folly of using immersion techniques to 'restore' a Rakusan print.

Unfortunately, in printing all versions of 60 (as well as several other designs in this series) Rakusan used a lavender pigment which is highly susceptible to sun-fading and will disappear entirely after only brief exposure to strong light. As a result, after loss of the lavender color the purple beautyberries will instead show the pink of the underprinted layer. Loss of the lavender pigment is a condition fault which adversely affects the value of the print. Therefore, framing and displaying any copy of 60 (or of the other affected designs) is not recommended.

Outside Source: The woodblock print of 60 was based on an original painting on silk whose current location is unknown. Although it was originally believed that Rakusan had painted all one hundred designs before publishing any of them as woodblock prints, the design for 60 proves that at least some paintings were created significantly later.

The publication of the first volumes of colorful lithographic plates for 鳥類寫生圖譜 (now 鳥類写生図譜), Chourui Shasei Zufu (CSZ), (1927-1938) was one of the main influences which inspired Rakusan to create this woodblock print series. [The exploration of this influence is the subject of a forthcoming article to appear on this website.] Rakusan took the images of both birds directly from the ornithological plate for CSZ #36 which was published as volume 2, number 6 in that series. However, that plate did not first appear until about halfway between the beginning of 1929 and mid 1930, and by then at least ten percent of Rakusan's own series had already appeared. The model for the male bird is at upper right, and the one for the female bird is at lower right.

Species Illustrated:
60 is also unusual in that the composition includes three botanical species, only the first of which is listed in the title-caption.

Japanese Beautyberry, Callicarpa japonica, is today most often called 紫式部, むらさきしきぶ, ムラサキシキブ, murasaki-shikibu. The name Rakusan wrote is still sometimes used instead, 紫もどき, murasaki-modoki, lit. 'mock purple' (from 紫, murasaki, 'purple, violet'; and 擬き, もどき, modoki, 'pseudo, mock'). This Japanese native ornamental shrub or small tree is often grown for its bright purple-violet berries which are also used in floral arrangements. Beautyberry loses its leaves in winter, and in 60 Rakusan shows the bare branches with a few berries left over from the autumn.

Japanese Pittosporum (Japanese Cheesewood, Japanese Mock-orange), 扉, 海桐, とべら, トベラ, tobira, is a native small tree with aromatic flowers. It is now often planted as an evergreen ornamental in many countries. Today the tree is also called in English 'tobira' (sometimes spelled 'tobera') from its Japanese name. The pittosporum branches with the terminal clusters of oval leaves appear here at top center and at right.

Bamboo stems appear at left and lower center. The species cannot be determined but appears to be a taller type usually called by the general name 竹, take, in Japanese.

Siberian Rubythroat, Calliope calliope, 野駒, のごま, ノゴマ, no-goma, lit. 'field robin', sometimes winters in Japan, but is otherwise a passage migrant. Because Rakusan borrowed images for this species, it is likely that he was not personally familiar with it.