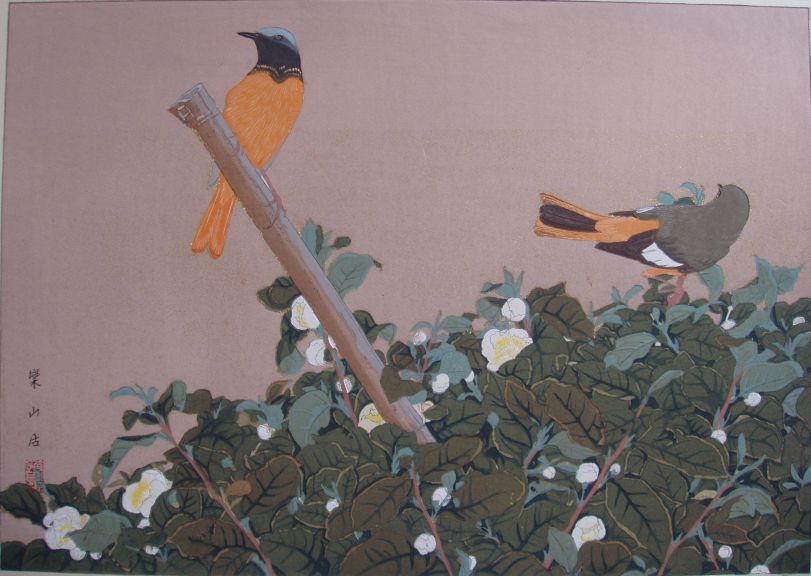 [*A note on the four later versions of 61: There is currently only a single copy of each, and more copies will be needed to sort out just how to assign them correctly among the later editions. This arrangement is tentative at best.]

Design History:
This woodblock print was produced from an original painting on silk dating from the late 1920s whose current location is unknown. The indentification of this design as number 61 is original to Rakusan who published the print as the 61st design in his series of one hundred woodblock prints called 楽山花鳥畫譜, Rakuzan Kachou Gafu, lit. 'Rakusan's Flower and Bird Print Series'.

In 1940 Rakusan received an important commission for three (or possibly four) identical presentation albums to be bestowed as part of the ceremonies for the signing of the Tripartite Pact in the autumn of 1940. For these albums Rakusan was determined to use his best available edition I designs. Inclusion of 61 indicates not only Rakusan's approval of the quality of this design, but also confirms that multiple edition I copies of 61 were still available for distribution at that late date. It is possible that edition II reprinting of 61 was not necessary before the wartime closure of the Rakusan studio in 1941.

Later Editions: Because Rakusan was not in the habit of reprinting until stocks of particular designs were very low or had run out entirely, any reprinting of edition II copies of 61 is constrained to within a very short period between the end of 1940 and the wartime closure of the Rakusan studio in 1941. It is entirely possible that none of the following examples were actually reprinted until after the war in edition III.

By the time these few copies were printed, Rakusan had already moved to reprinting in much smaller print runs. Therefore any perceived differences among these otherwise very similar copies probably represent different printing times. Because Rakusan used edition I paper to reprint edition II of later design 91, it is likely that use of edition I paper for 61 is also from edition II. The presence of a Foster era signature suggests a postwar edition III reprinting for the last example. Use of edition II paper would not be expected to be problematic, except that Rakusan used leftover edition II paper in edition III to reprint at least nearby designs 60, 63, and 67. Therefore, it remains unclear when edition II paper was used for 61.

Note that it is extremely difficult to photograph Rakusan's tan backgrounds with any degree of color fidelity. The two edition I examples are actually the same color in person, but it is indeed a slightly grayer tone than Rakusan used in the later printings. Similarly, the colors in the two edition II examples are also actually the same warmer shade. All copies of 61 regardless of edition have golden glitter on the lower three-quarters of the background, but capturing it in a photograph is dependent on oblique lighting to show properly. The more teal-like color of the leaves in the edition III example is probably a real difference, but any other color comparisons are unreliable.

Daurian Redstart, Phoenicurus auroreus, 尉鶲, 常鶲, 上鶲, じょうびたき, ジョウビタキ, jou-bitaki, is a native Japanese species. The original spelling of the name is likely to have been 尉鶲, jou-bitaki, lit. 'oldman flycatcher', because of the gray top of the head of the male bird. The bird on the left is the more brightly colored male, and the bird on the right is a female. Rakusan here called the birds simply 鶲, hitaki, 'flycatcher', which is a general name used for many similar birds, including the redstarts.