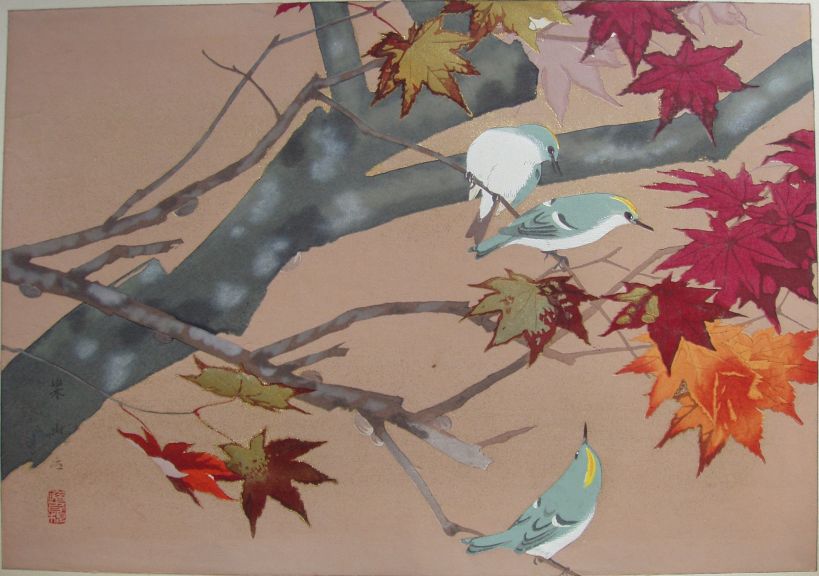 Design History:
This woodblock print was produced from an original painting on silk dating from the late 1920s whose current location is unknown. The indentification of this design as number 62 is original to Rakusan who published the print as the 62nd design in his series of one hundred woodblock prints called 楽山花鳥畫譜 Rakuzan Kachou Gafu, lit. 'Rakusan's Flower and Bird Print Series'. Copies from all three editions of 62 are very similar in appearance and can only be reliably distinguished by their attribution markings and clues from their secondary addenda.

Edition I: Initial edition I publication of 62 was in November 1931 (or perhaps slightly later) in installment thirty-one (of fifty) with a print run of about two hundred copies. However, at least one (and probably more) additional edition I printings of 62 were produced before the series publication was completed in mid 1933 and all edition I printings ceased. Over sixty percent of the documented copies of 62 come from these edition I printings. The different copies illustrated at top and and below left are typical examples of edition I.

Edition II: Few edition II copies of 62 have been documented which suggests that only a single print run was produced sometime during the period between 1936 and 1941. An edition II copy of 62 is one of a very few designs to which Rakusan has added a handwritten English rendition of his woodblock-printed Japanese title-caption (omitting the season designation). (See citation above.) This inscribed copy also has an early cursive Rakusan romaji signature added in the lower right bottom margin which together with a city-name stamp suggests a distribution circa 1947. Currently, about half of the documented edition II copies of 62 also have city-name stamps, including the example illustrated below center.

Edition III: The relative scarcity of edition III copies of 62 suggests that only a single, much smaller, print run was produced sometime in the period between 1948 and 1955. As with many of these smaller edition III print runs, the presence of a Foster era cursive Rakusan romaji signature at bottom within the image area is a diagnostic marker for this edition. The copy illustrated below right is a typical example of edition III.

There is a carving error in 62 which has left a small area of background unprinted. It is located below the gold leaf along the top margin directly above the head of the uppermost bird. In edition I and edition III Rakusan left this error uncorrected, but he painted in a correction for edition II. This correction is a diagnostic marker for edition II and easily distinguishes edition II from edition III. This is especially helpful since both later editions have the same signature and seal markings.

Although similar in overall appearance, there are subtle color differences which distinguish each edition of 62. Unfortunately, these differences can be difficult to photograph with exact color fidelity. For example, the background colors in each edition are slightly different as shown in the examples above, but in person the colors are all also slightly different from the way they appear here. 62 is one of many Rakusan designs with golden glitter scattered on the background of all edition I copies, but in reprinting both of the later editions this glitter was omitted. However, all three editions of 62 include a golden metallic ink on five leaves around the center of the design. When imaged directly from above (as in all the examples on this page), this metallic ink typically appears dull and greenish, but when seen or imaged at an angle, it is actually untarnished.

Because of the way the light and dark surface patches on the branches were printed, no two copies can be exactly alike. However, the patches are not random, and the arrangement for each edition is slightly different. Therefore copies from the same edition tend to resemble one another more than they do copies from other editions. The same can also be said for the differences in the other leaves. Notice espeicially the three mostly orange leaves at lower right in each example.

There are many other small printing differences which show up in side by side comparisons of the edition examples. One such is the tail of the uppermost bird which has a black tip in edition I and edition II which wasn't printed in edition III.

Species Illustrated:
Japanese Maple, Acer palmatum, 楓 kaede, is a much-hybridized and selected species of small ornamental tree. Originally native to Japan, it is now planted widely around the world in many forms and colors. Rakusan used the species in several prints and paintings at different stages in its growth cycle. Here Rakusan used the descriptor 紅葉 kou-you, lit. 'red leaf' which refers to leaves which have turned colors (especially red) in autumn, and not to a botanical variety. His own translation of 紅葉楓 kou-you kaede, lit. 'red leaf maple' is "Red Autumn Maple Leaves".

In 62 and in several plum designs (4, 123-1, 123-3, 123-5, and 123), small, striped, mounded gray or brownish ovals are shown adhering to the tree bark. They are over-wintering adults of a kind of small ladybird beetle (family Coccinellidae) whose larvae are major predators of scale-insects. Their general name is 天道虫, 瓢虫, 紅娘, てんとう虫, てんとうむし, テントウムシ, tentoumushi. The particular species Rakusan illustrates is probably Chilocorus rubidus, 赤星天道虫, 赤星瓢虫, あかほしてんとうむし, アカホシテントウムシ, aka-hoshi tentoumushi, lit. 'red-spot ladybird-beetle'. Most of the time these small beetles are firmly attached to the bark of plum, peach, or other ornamental trees. There are eight beetles included in 62, mostly adhering to the undersides and joints of branches.

Goldcrest, Regulus regulus, 菊戴, きくいただき , キクイタダキ, kiku-itadaki, lit. 'chrysanthemum-crowned', is a tiny, active, native bird. In his rendition of the title-caption into English Rakusan transliterated the Japanese name rather than using the common English name (which he likely did not know).