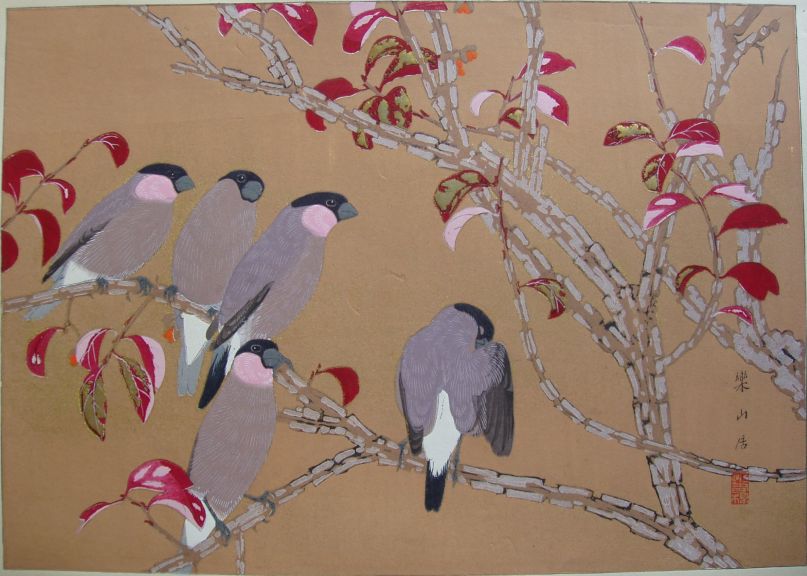 Design History:
This woodblock print was produced from an original painting on silk dating from the late 1920s whose current location is unknown. The indentification of this design as number 64 is original to Rakusan who published the print as the 64th design in his series of one hundred woodblock prints called 楽山花鳥畫譜, Rakuzan Kachou Gafu, lit. 'Rakusan's Flower and Bird Print Series'.

Edition I: Initial edition I publication of 64 was in December 1931 (or perhaps slightly later) in installment thirty-two (of fifty). The copy illustrated above is typical of edition I. There is no evidence for any other editions or variations of 64. Since only a relatively few copies of 64 have been documented, it appears that printing of this design was limited to the single first print run of about two hundred copies. There are only two known reasons why Rakusan made no additional 100 Series reprintings. Either the design was too difficult to print in that first print run, and reprinting would have been uneconomical of time or material; or the design did not prove to be popular, and there was never any need to reprint additional copies for sale.

Copies in Public Collections:
Edition I: Museum of Fine Arts, Boston, Massachusetts, USA; (1951) 51.1747 [not illustrated online]. Species Illustrated:
Winged Spindletree (Burning Bush, Winged Euonymus), Euonymus alatus, 錦木, にしきぎ, ニシキギ, nishiki-gi, lit. 'colored tree', is a Japanese native often planted in Japan and other countries as an ornamental shrub or small tree. Here 錦 nishiki refers to the brilliant color of the autumn foliage which can be seen lingering on the tree in Rakusan's design. (However, in bird names it often has its other meaning, 'brocade'.)