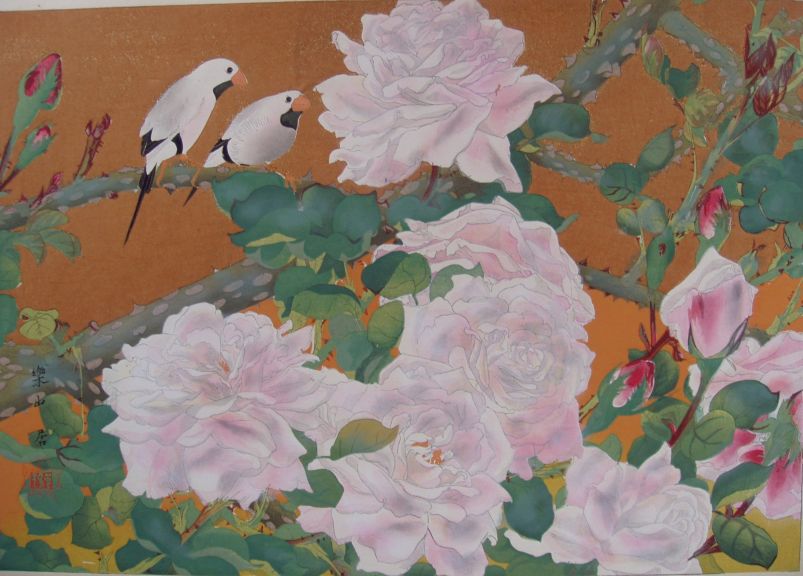 [*Rakusan included の部, no bu, 'division', only on the pre-printed folio labels and omitted it in the final versions of the title-captions on the woodblock prints. 7 is very unusual in showing different seasons in the title-caption versions.]

Design History:
This woodblock print was produced from an original painting on silk dating from the late 1920s whose current location is unknown. The indentification of this design as number 7 is original to Rakusan who published the print as the 7th design in his series of one hundred woodblock prints called 楽山花鳥畫譜, Rakuzan Kachou Gafu, lit. 'Rakusan's Flower and Bird Print Series'.

Edition I: First printing and publication details for 7 are known precisely because copies of the delivery documents for installments three and four have survived. The design was first announced as upcoming in the documents for installment three sent out on July 20, 1929. The first printing run of about two hundred copies was completed August 20, 1929, and the publication date was August 21, 1929 in installment four (of fifty). Although it is possible that an additional edition I printing could have been made before mid 1933 when all edition I printing ceased, the initial printing of 7 may have been the only one. Currently, all documented copies of 7 come from edition I, including the typical example illustrated above; and no later edition printings of 7 are known.

Species Illustrated:
The general name for any kind of Rose, (genus Rosa), is 薔薇, ばら, バラ, bara. The rose Rakusan illustrates in 7 is an unidentified garden hybrid.

Related Designs: Other designs with roses: