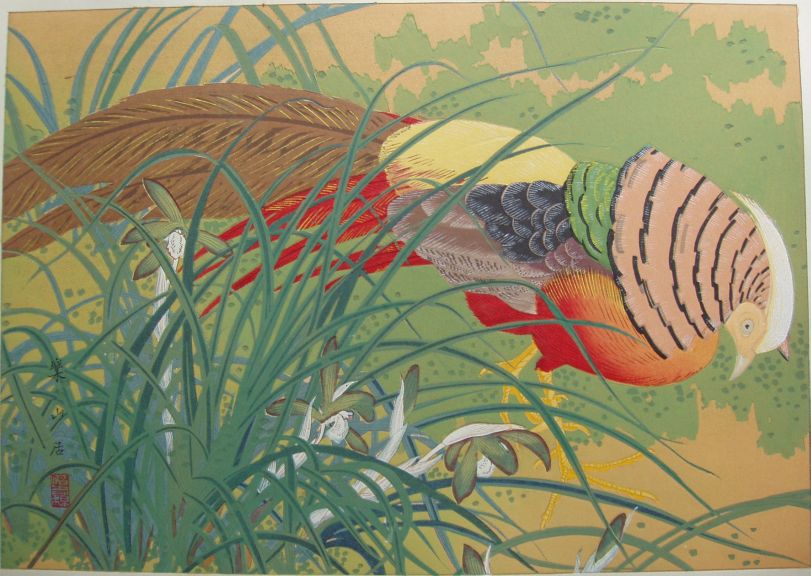 Design History:
This woodblock print was produced from an original painting on silk dating from the late 1920s whose current location is unknown. The indentification of this design as number 71 is original to Rakusan who published the print as the 71st design in his series of one hundred woodblock prints called 楽山花鳥畫譜 Rakuzan Kachou Gafu, lit. 'Rakusan's Flower and Bird Print Series'. Initial edition I publication of 71 was in April 1932 (or perhaps slightly later) in installment thirty-six (of fifty). Because this design appeared late in the series, 71 may not have been reprinted before the series completion in 1933, and only the initial print run of about two hundred copies comprises edition I. The copy illustrated here is typical of edition I. No later edition printings of 71 are currently known. Species Illustrated:
Spring Orchid (Goering's cymbidium), Cymbidium goeringii, 春蘭, しゅんらん, シュンラン, shun-ran, lit. 'spring orchid' is a native orchid found in Japan and much of temperate South and East Asia. It is culturally important as a harbinger of spring, and figures significantly in Japanese art. However, this design is the only known Rakusan artwork which includes an orchid. The species has many English names, but none are in widespread or commonly agreed use.

Golden Pheasant, Chrysolophus pictus, is an exotic species which was then (and still is today) often kept zoos, gardens, and aviaries worldwide. The modern kana name きんけい, キンケイ, kin-kei, subsumes two similar kanji names which are pronounced the same way: 錦鶏, kin-kei, lit. 'brocade chicken'; and 金鶏, kin-kei, lit. 'gold chicken'. (Any of the name variations can also be written with an optional 鳥, ちょう, チョウ, chou, 'bird', at the end.) Rakusan wrote 錦雞鳥, kin-kei-chou, lit. 'brocade chicken bird', using an older kanji 雞 which today has been replaced by 鶏 in the meaning 'chicken'.