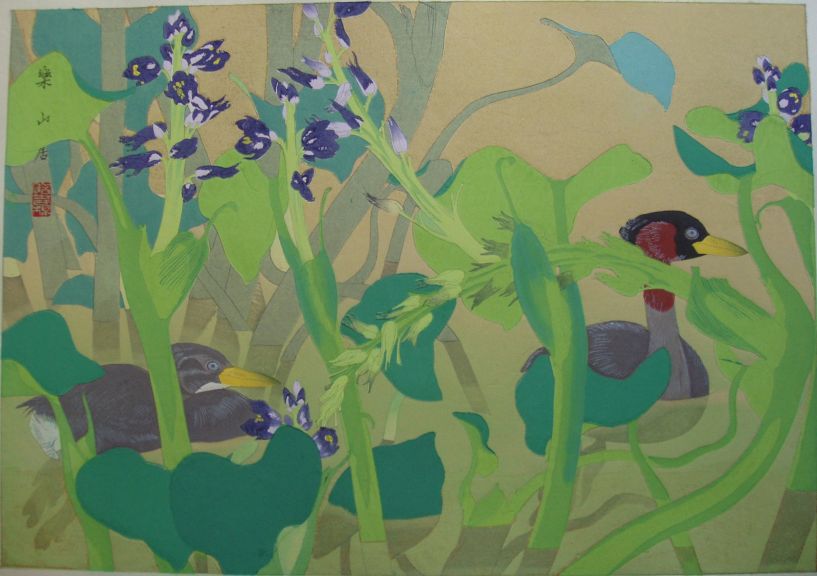 Design History:
This woodblock print was produced from an original painting on silk dating from the late 1920s whose current location is unknown. The indentification of this design as number 76 is original to Rakusan who published the print as the 76th design in his series of one hundred woodblock prints called 楽山花鳥畫譜 Rakuzan Kachou Gafu, lit. 'Rakusan's Flower and Bird Print Series'. Initial edition I publication of 76 was in June 1932 (or perhaps slightly later) in installment thirty-eight (of fifty). Because this design appeared late in the series, 76 may not have been reprinted before the series completion in 1933, and only the initial print run of about two hundred copies comprises edition I. The copy illustrated here is typical of edition I. No later edition printings of 76 are currently known.

About the time 76 was being prepared, Rakusan apparently had trouble communicating his designs to whomever was to carve the blocks. Several designs from this period show significant areas which were either not inked, or inked in the incorrect colors. In the left half of 76 there are at least a half dozen such areas.

Species Illustrated:
Heart-shaped False-pickerelweed (Mizu-aoi), Monochoria (vaginalis) korsakowii, 水葵, みずあおい, ミズアオイ, mizu-aoi, lit. 'water-mallow', is an aquatic native weed found in ponds and ricefields. It is related to water-hyacinth and (like that species) can be an invasive pest. This species has no widely accepted English common name, and today Mizu-aoi is also sometimes used in the literature.

Little Grebe, Tachybaptus (Podiceps) ruficollis is a common native bird with many Japanese names. Today, it is most often called 鸊鷉, かいつぶり, カイツブリ, kaitsuburi, which is also used as a general name for any grebe. However, 鸊鷉 may alternatively be read as Rakusan did, かいつむり, カイツムリ, kaitsumuri. Rakusan shows a male and a female, presumably a mated pair.