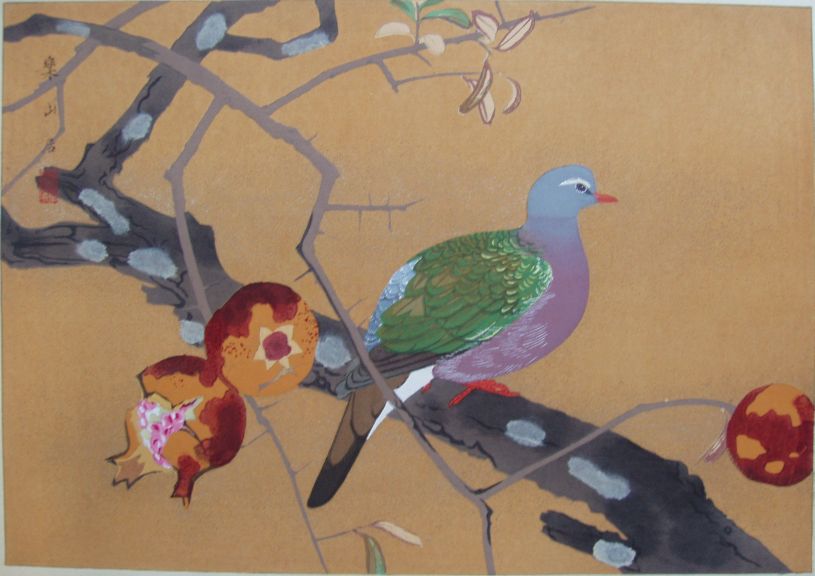 Design History:
This woodblock print was produced from an original painting on silk dating from the late 1920s whose current location is unknown. The indentification of this design as number 78 is original to Rakusan who published the print as the 78th design in his series of one hundred woodblock prints called 楽山花鳥畫譜, Rakuzan Kachou Gafu, lit. 'Rakusan's Flower and Bird Print Series'. Initial edition I publication of 78 was in July 1932 (or perhaps slightly later) in installment thirty-nine (of fifty). Because this design appeared late in the series, 78 may not have been reprinted before the series completion in 1933, and only the initial print run of about two hundred copies comprises edition I. The copy illustrated here is typical of edition I. No later edition printings of 78 are currently known. Species Illustrated:
Pomegranate, Punica granatum, 柘榴, 石榴, 若榴, ざくろ, ザクロ, zakuro, is an originally exotic deciduous shrub. In Japan it has been extensively hybridized and is widely grown for its large edible fruit, ornamental flowers, and decorative bark which make it popular also as a bonsai subject. The descriptor 枯 (now usually 枯れ) kare means 'dry, withered, dead (of vegetation)'.

Emerald Dove, Chalcophaps indica, 金鳩, きんばと, キンバト, kin-bato, lit. 'gold-dove', is technically a Japanese native since it is found in the Ryukyus. However, it is not found on the main Japanese Islands, and Rakusan would have encountered it in life only as a cage or aviary specimen.