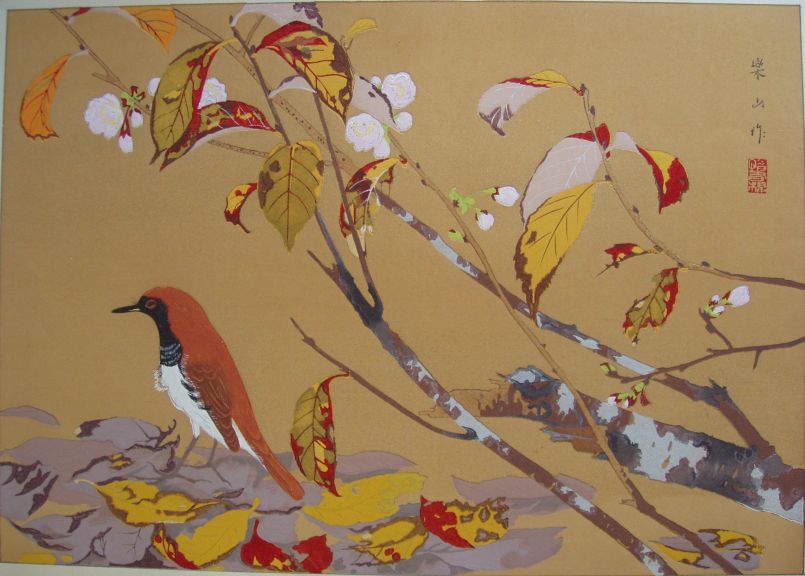 Design History:
This woodblock print was produced from an original painting on silk dating from the late 1920s whose current location is unknown. The indentification of this design as number 81 is original to Rakusan who published the print as the 81st design in his series of one hundred woodblock prints called 楽山花鳥畫譜, Rakuzan Kachou Gafu, lit. 'Rakusan's Flower and Bird Print Series'. Initial edition I publication of 81 was in September 1932 (or perhaps slightly later) in installment forty-one (of fifty). Although, additional edition I printings of 81 could have continued until mid 1933, it appears now that the initial print run of about two hundred copies comprises the entirety of edition I. The copy illustrated is typical of edition I. No later edition copies of 82 are currently known. Species Illustrated:
Winter-flowering Cherry, Prunus x parvifolia cv. 'Fuyu-zakura', 冬桜, ふゆざくら, フユザクラ, fuyu-zakura, lit. 'winter-cherry', is a hybrid of P. speciosa and P. incisa. This variety is notable in that it continues to bloom from October through until the following spring. Occasionally, as Rakusan shows in 81, the flowers bloom while the leaves of the previous year in autumn color still remain on the tree.

Ryukyu Robin, Larvivora komadori, 赤髭, 赤鬚, あかひげ, アカヒゲ, aka-hige, lit. 'red-beard', is a near-threatened native of the Ryukyu Islands. Although technically a Japanese native, it is not found on the main islands; and Rakusan would have only encountered it as an aviary specimen.

Related Designs: Other designs with kinds of cherries: