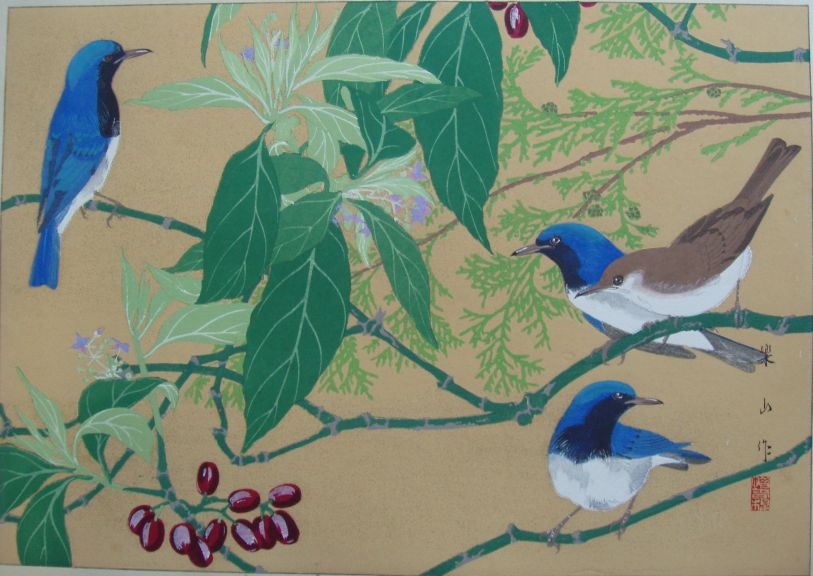 Design History:
This woodblock print was produced from an original painting on silk dating from the late 1920s whose current location is unknown. The indentification of this design as number 84 is original to Rakusan who published the print as the 84th design in his series of one hundred woodblock prints called 楽山花鳥畫譜, Rakuzan Kachou Gafu, lit. 'Rakusan's Flower and Bird Print Series'. Initial edition I publication of 84 was in October 1932 (or perhaps slightly later) in installment forty-two (of fifty). Because this design appeared so late in the series, it may not have been reprinted before the series completion in 1933, and only the initial print run of about two hundred copies comprises edition I. The copy illustrated here is typical of edition I. No later edition reprintings of 84 are currently known. Copies in Public Collections:
Edition I: Museum of Fine Arts, Boston, MA, USA; (1951) 51.1746 [not illustrated online]. Species Illustrated:
Japanese Aucuba (Japanese Laurel), Aucuba japonica, 青木, あおき, アオキ, ao-ki, lit. 'green tree', is a Japanese native ornamental shrub or small tree which has many cultivated varieties. Rakusan has shown the red berries from the previous season lingering together with the spring crop of new flowers.

Hinoki (Japanese) Cypress, Chamaecyparis obtusa, 桧(木), 檜(木), ひのき, ヒノキ, hinoki, is a popular ornamental and timber species native to Japan. The Japanese name has been borrowed as the English common name. Rakusan does not mention Hinoki Cypress in the title-caption, but a branch with cones extends into the background from the right frame.

Blue-and-White Flycatcher, Cyanoptila cyanomelana, 大瑠璃, おおるり, オオルリ, oo-ruri, lit. 'large lapis-lazuli', is a familiar native species. Rakusan has shown three colorful males who are perhaps courting the one plainer female in the group. Here Rakusan uses 群, ore, 'flock (a general collective)'. For the name of this bird in the title-caption for 84 Rakusan wrote 大るり, oo-ruri, using a mixture of kanji and kana. However, for the same species in 36 Series design 130 (see below) he used the all-kanji form 大瑠璃 and added 鳥, chou/tori, 'bird', as clarification.