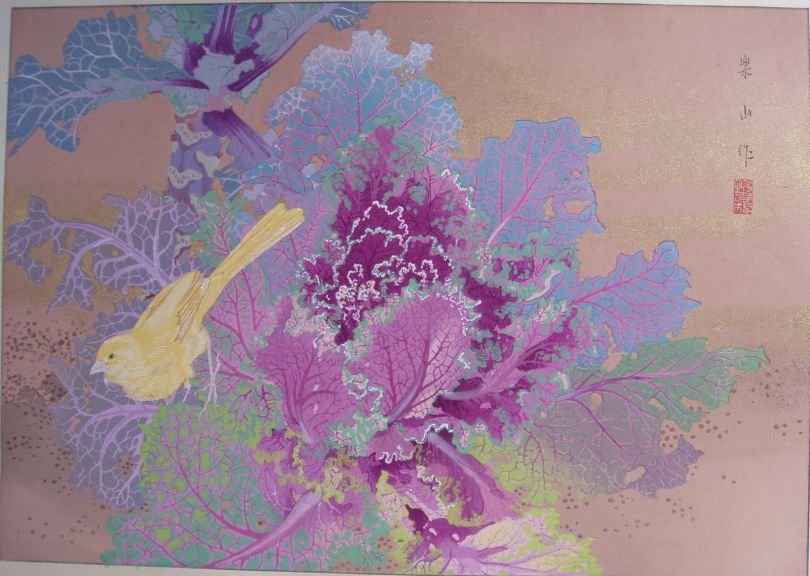 Design History:
This woodblock print was produced from an original painting on silk dating from the late 1920s whose current location is unknown. The indentification of this design as number 85 is original to Rakusan who published the print as the 85th design in his series of one hundred woodblock prints called 楽山花鳥畫譜, Rakuzan Kachou Gafu, lit. 'Rakusan's Flower and Bird Print Series'.

***CAUTION: For all three editions of 85 Rakusan created his red-violet, lavender, and purple inks using mixtures including an unstable purple pigment. This particular pigment (probably a single kind of organic lake compound) is unfortunately extremely susceptible to sun-fading. It can even disappear completely - leaving only the more stable pigments with which it was once mixed. The foliage will then appear white, red, blue, green, etc. depending on the combined or underprinted color. This alteration can be especially evident in the later editions where Rakusan had increased the proportions of those primary colors in the ink mixtures. Many copies of 85 have already been irreparably damaged by this fading which of course adversely affects the value of the print. Therefore, 85 is one of several Rakusan designs which should never be framed or displayed in order to retain its original colors.

Edition I: Initial edition I printing and publication of 85 was in November 1932 (or perhaps slightly later) in installment forty-three (of fifty). 85 proved immediately popular, and the first print run of about two hundred copies was supplemented by a second edition I printing before the series was completed in mid 1933 and edition I closed out. Over half of the documented copies of 85 come from these edition I print runs. The two different example copies illustrated at top and and below left are typical of the original condition of edition I of 85 (see caution above).

Edition Ii: 86 was reprinted in edition II between 1936 and 1941. The presence of city-name stamps indicates that some edition II copies of 85 were still available for sale as late as 1947. At least limited fading (see above) is an issue on most of the documented edition II copies of 85, including the copy illustrated below center. Therefore, the original colors probably differed from those of this example.

Edition III: 85 was reprinted in a single, smaller, edition III reprinting. Normally edition III reprinting can only be dated between 1948 and 1955, but inclusion of an edition III copy of 85 in the Foster booklet (see below) indicates a reprinting date at least a few years before the end of that period. Currently, all documented edition III copies of 85 have a Foster era cursive Rakusan romaji signature, including the example illustrated below right. In order to more closely show the original colors, exceptionally, this edition III example is of the Foster fine art reproduction and not the original woodblock print.

Each of the three editions has a slightly different signature and seal placement, including a different seal for each. There are also some easily distinguishable production and color differences - especially in the foliage. The tan upper backgrounds are a slightly different color in each edition, and the darker lower third is also distinctly differently shaded. Unfortunately, Rakusan's tan pigments are very difficult to photograph with any color fidelity, and none of these illustrations are precisely color-matched. In the edition I background the middle and upper areas are woodblock-overprinted with horizontal bands of adhesive which have been thickly dusted with metallic gold glitter. For each of the later editions the glue bands are omitted and these editions typically lack glitter.

Better quality images of unfaded copies of edition II and edition III of 85 are currently unavailable.

Other Foster Information:
85 is among the most familiar Rakusan designs because of Walter Foster. In addition to marketing original Rakusan woodblock prints of 85 from Japan, Foster also sold two grades of reproductions which he had machine-printed in the USA. Both reproduction versions were created from the same original model, an edition III copy of 85 in Foster's personal collection. One version is a fine art reproduction produced for individual sale, and the other appears as page 11 of the Foster booklet.

The fine art reproduction was produced to very high standards of photolithography on good quality, heavy matte paper; and the inks were carefully color-matched to those of the original woodblock print (see the illustration above right). Because of this attention to detail, it was relatively expensive, few copies were sold, and they are seldom encountered today. Instead, what are mostly offered for sale as reproductions of 85 are actually copies of page 11 cut from the Foster booklet. Regrettably, the booklet was inexpensively and inexactly machine-printed on semi-gloss paper, and its illustration colors are not true to the original. The colors of the booklet reproduction on page 11 are the least faithful in the entire publication. The original background is beige and not at all greenish, and most of the other colors as printed there are also oddly shifted towards green.

Because Foster could not read Rakusan's Japanese title-captions, he made up ones of his own to use in the booklet. Here he called 85 "Canary and Cabbage Leaves".