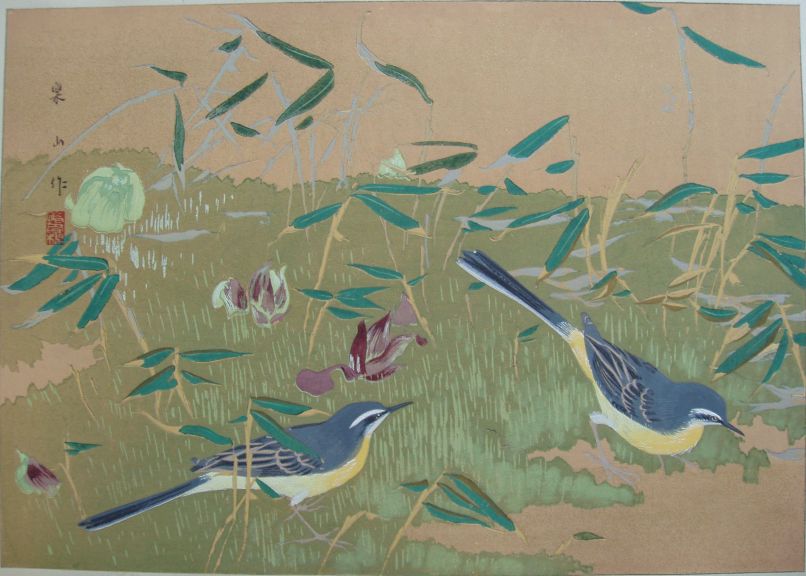 Design History:
This woodblock print was produced from an original painting on silk dating from the late 1920s whose current location is unknown. The indentification of this design as number 87 is original to Rakusan who published the print as the 87th design in his series of one hundred woodblock prints called 楽山花鳥畫譜, Rakuzan Kachou Gafu, lit. 'Rakusan's Flower and Bird Print Series'. Initial edition I publication of 87 was in December 1932 (or perhaps slightly later) in installment forty-four (of fifty). Because this design was among the last in the series, it was unlikely to have been reprinted immediately. Therefore only the initial print run of about two hundred copies comprises edition I for this design. The copy illustrated here is typical of edition I. No later edition copies of 87 are currently known.

This design is one of only a very few where Rakusan mentions any physical features. Here, 堤, tsutsumi, is 'bank, embankment, dike'.

Species Illustrated:
The genus Pleioblastus includes a number of low-growing bamboos which spread vigorously with runners. The taxonomy of this genus is complex and controversial, and the common names in both English and Japanese overlap and interpenetrate. It also remains very difficult to identify any single variety from an artwork. Rakusan described this variety as 根笹, ねざさ, ネザサ, ne-zasa, 'runner bamboo-grass' (lit. 'root bamboo-grass'). Although that name can be applied to several different forms of Pleioblastus, it is today usually identified with one or more varieties of Pleioblastus chino. This Japanese varietal name is formed from the very general name for all species of bamboo-grass (also called dwarf bamboo), 笹, ささ, ササ, sasa. Today these names are all usually written in kana.

Gray Wagtail, Motacilla cinerea, 黄鶺鴒, きせきれい, キセキレイ, ki-sekirei, lit. 'yellow wagtail', is a common Japanese native. The two birds in this season are probably meant to indicate a mated pair, but the sexes are alike. Gray Wagtail is one of only a few species which Rakusan illustrates in more than one design in this series. It occurs also in the immediately preceding design, 86 (see below).