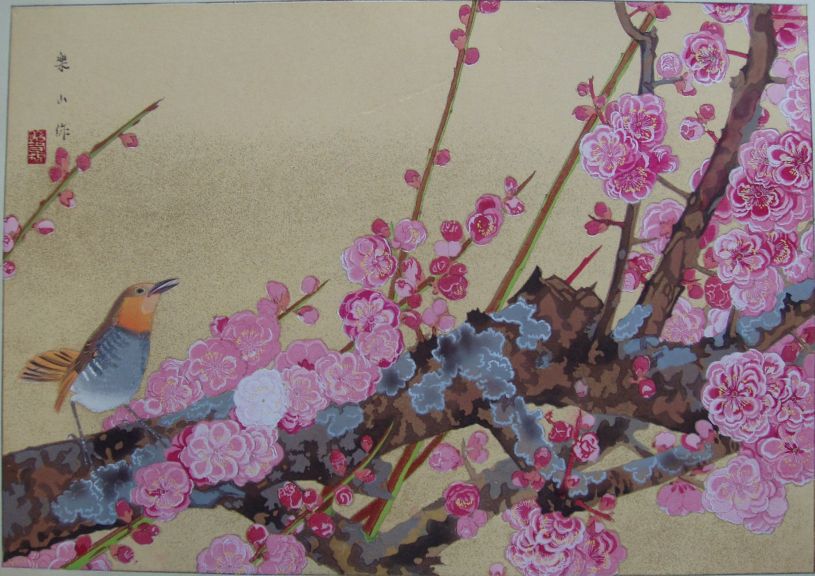 Design History:
This woodblock print was produced from an original painting on silk dating from the late 1920s whose current location is unknown. The indentification of this design as number 89 is original to Rakusan who published the print as the 89th design in his series of one hundred woodblock prints called 楽山花鳥畫譜 Rakuzan Kachou Gafu, lit. 'Rakusan's Flower and Bird Print Series'.

Edition I: Initial printing and publication of 89 was in January 1933 (or perhaps slightly later), and it was delivered in installment forty-five (of fifty). Because this design was among the last in the series, only the initial print run of about two hundred copies comprises the entirety of edition I for 89. The copy illustrated above is typical of edition I.

No edition II reprintings of 89 are currently known.

Edition III: 89 was reprinted in a single, smaller print run toward the end of the period between 1948 and 1955. Very few copies have been documented, and images are not available.

Species Illustrated:
Japanese Plum-Apricot (usually called Plum), Prunus mume, 梅, うめ, ウメ, ume, is a Japanese native flowering fruit tree. It has been extensively hybridized and selected, and there are many forms and colors. As one of the earliest blooming trees, it is a beloved cultural symbol of the turning of the seasons when it blooms in the winter and early spring. Although most wild trees have white flowers, a few have varying amounts of red pigment in the wood, shoots, and flowers; and this trait has been encouraged in breeding. These pigmented forms are collectively called by a different name, Red Plum, 紅梅, こうばい, コウバイ, kou-bai, lit. 'red plum'; but they are actually the same species. (The descriptor 紅 may be read either as beni or as kou, and it can refer to a wide range of colors from crimson-red through rose to pale pink, depending on the context. Although conventionally translated into English as Red Plum, many familiar 紅梅 flowers are actually pink.) In the title-caption to 89 Rakusan described this variety as 八重紅梅 , yae-koubai, lit. 'double-flowered red plum'; but the exact cultivar is indeterminate.

Many of the Rakusan plum designs are in black and white, and without additional information it is impossible to determine whether or not most of them are red plum or the original white variety. In the related designs listed below only those definitely identifiable as red plum are included, but doubtless several more belong there as well.

Japanese Robin, Larvivora akahige, 駒鳥, こまどり, コマドリ, koma-dori, is a familiar Japanese species. The bird shown is apparently a male who is singing to define his territory.