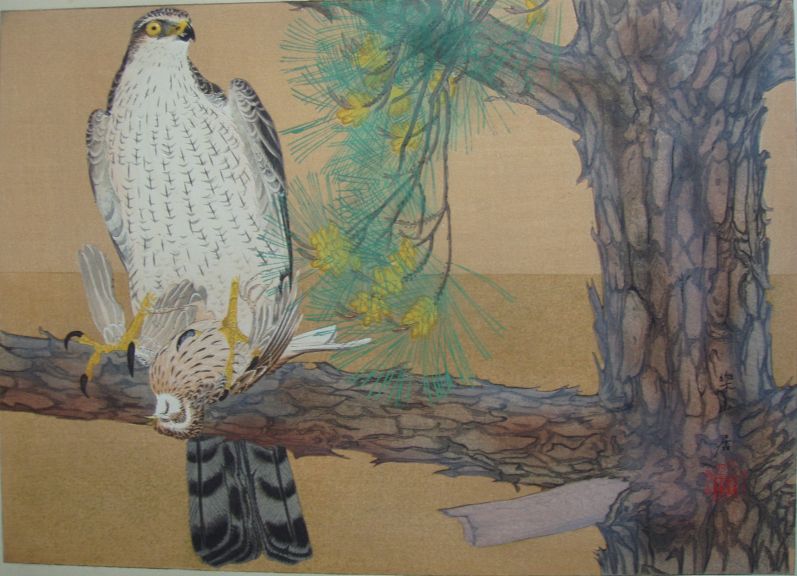 Design History:
This woodblock print was produced from an original painting on silk dating from the late 1920s whose current location is unknown. The indentification of this design as number 9 is original to Rakusan who published the print as the 9th design in his series of one hundred woodblock prints called 楽山花鳥畫譜, Rakuzan Kachou Gafu, lit. 'Rakusan's Flower and Bird Print Series'.

Edition I: First printing and publication details for 9 are known precisely because copies of the delivery documents for installments four and five have survived. Exceptionally, the listing order on both folios is reversed from would be expected with 10 listed before 9. 9 was first announced as upcoming in the documents for installment four sent out on August 21, 1929. The first printing run of about two hundred copies of 9 was completed September 20, 1929, and the publication date was September 21, 1929 in installment five (of fifty). At least one additional full edition I print run was made before mid 1933 when the series was completed and edition I printing ceased. Over four fifths of the documented copies of 9 come from edition I printings. All edition I copies of 9 look very much alike, including the two different examples illustrated at top above and below left. An edition I copy of 9 is readily identifiable by the superimposed glue band used to adhere gold metallic glitter over the lower half of the otherwise even, neutral tan background.

Edition II: Probably fairly late in the period between 1936 and 1941 edition II copies of 9 were reprinted in a single, smaller, print run. Only a very few edition II copies of have been documented, but a copy with a city-name stamp shows that at least some were available for sale after World War II. Edition II copies are easily identified by the absence of a glue glitter band and the more pinkish tan hue of the even overall background. The otherwise typical edition II copy of 9 illustrated at center below also has a secondary seal C in the lower left corner.

Edition III: The copy of 9 in the demonstration set in the collection of the artist's family has seal B. This seal and the scarcity of other examples suggest that this copy comes from a single, very small, edition III print run produced sometime between 1948 and 1955. Unfortunately, documentary evidence of the edition-diagnostic watermark is lacking, as is a reproduceable image or other details for comparison with the other editions.

Species Illustrated:
Japanese Red Pine, Pinus densiflora, 赤松, あかまつ, アカマツ, aka-matsu, is a Japanese native conifer. The name can also be read me-matsu. Rakusan included pine in several other designs, but in none of those is this particular species clearly identifiable (see links below).

Japanese (or Lesser) Sparrowhawk, Accipiter gularis, 雀鷂, 雀鷹, つみ, ツミ, tsumi, is one of two species of sparrowhawk native to Japan. (The other is Eurasian Sparrowhawk, Accipiter nisus, now usually called ハイタカ, hai-taka, etc.) Both species show marked sexual dimorphism, and because they are of different sizes, the males and females each take a somewhat different assortment of prey. Since both species were historically popular in falconry, the males and females of each species have different Japanese names. This multiplicity of names can lead to some popular confusion as to species, especially since falconry is no longer widely known or practiced. Rakusan created two different sparrowhawk designs; but instead of illustrating each of the two species, he instead chose each of the two sexes of the Japanese Sparrowhawk. 9 shows the larger but less colorful female, and 28 shows the smaller brighter male of the same species. (See link below.)

Skylark, Alauda arvensis, 雲雀, ひばり, ヒバリ, hibari, is a widespread species of which there is only a single native variety found in Japan. Rakusan used the skylark in two different designs in this series, here in 9 as dead prey, and in number 91 in life (see link below). In the title-caption for 9 Rakusan used a variant name which is potentially confusing. Today 山雲雀, やまひばり, ヤマヒバリ, yama-hibari, lit. 'mountain-skylark', is the ornithological name for a different species of bird unrelated to the larks, Siberian Accentor, Prunella montanella. However, in popular usage it can also mean 'a skylark found in the mountains' which is what Rakusan apparently originally intended.