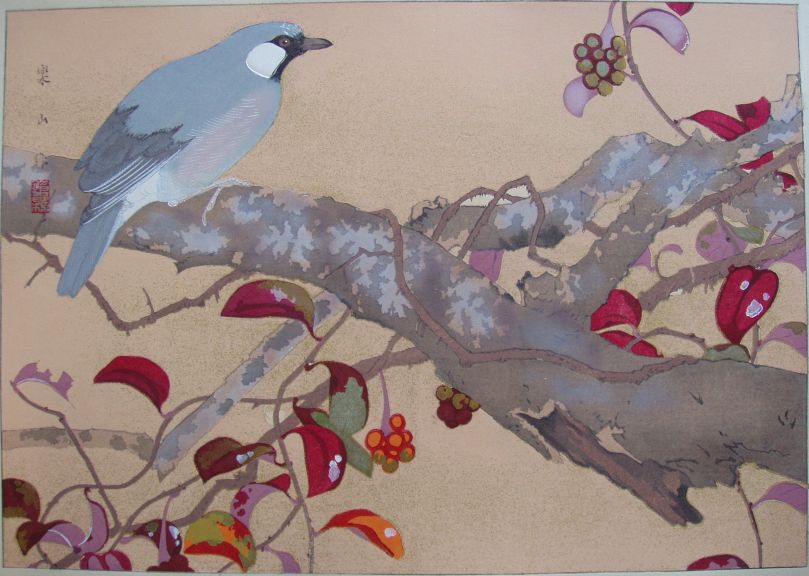 Design History:
This woodblock print was produced from an original painting on silk dating from the late 1920s whose current location is unknown. The indentification of this design as number 92 is original to Rakusan who published the print as the 92nd design in his series of one hundred woodblock prints called 楽山花鳥畫譜, Rakuzan Kachou Gafu, lit. 'Rakusan's Flower and Bird Print Series'. Initial edition I publication of 92 was in February 1933 (or perhaps slightly later) in installment forty-six (of fifty). Because this design was among the last in the series, it was unlikely to have been reprinted immediately. Therefore only the initial print run of about two hundred copies is believed to comprise edition I for this design. The copy illustrated here is typical of edition I. No later edition printings of 92 are currently known.

92 has a number of printing flaws caused by improper carving of the wooden blocks. Most noticeable are three small uninked areas of the center background (bounded by the portion of the vine growing above the branch). There are also two uninked areas of a single leaf at lower left center, and a few similar small patches at upper right.

Copies in Public Collections:
Edition I: Museum of Fine Arts, Boston, MA, USA; (1951) 51.1749 [not illustrated online]. Species Illustrated:
Scarlet Katsura Vine, Katsura japonica, is called in Japanese 実葛, さねかずら, サネカズラ, sane-kazura. Another name is 美男葛, びなんかずら, ビナンカズラ, binan-kazura. The vine is growing upon what is only described as 枯木, kare ki, lit. 'dead (or winter dormant) tree', and is not further identifiable.

Black-throated Laughingthrush, Garrulax chinensis, 大官鳥, たいかんちょう, タイカンチョウ, taikan-chou, lit. 'high official bird', is not native to Japan. Rakusan would have encountered it in life only as an exotic cage or aviary specimen.

Related Designs:
Other designs with species of laughingthrush: