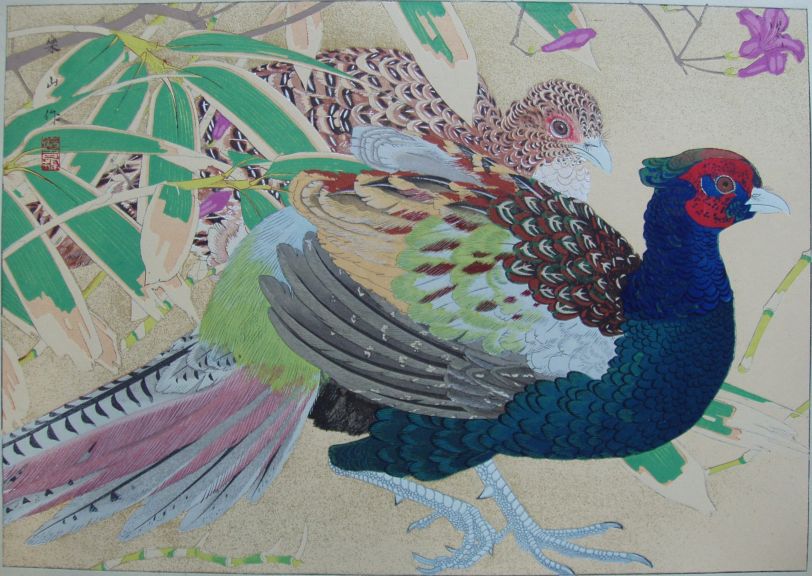 Design History:
This woodblock print was produced from an original painting on silk dating from the late 1920s whose current location is unknown. The indentification of this design as number 93 is original to Rakusan who published the print as the 93rd design in his series of one hundred woodblock prints called 楽山花鳥畫譜, Rakuzan Kachou Gafu, lit. 'Rakusan's Flower and Bird Print Series'. Initial edition I publication of 93 was in March 1933 (or perhaps slightly later) in installment forty-seven (of fifty). Because this design was among the last in the series, it was unlikely to have been reprinted immediately. Therefore only the initial print run of about two hundred copies is believed to comprise edition I for this design. The copy illustrated here is typical of edition I. No later edition printings of 93 are currently known. Species Illustrated:
Azaleas and rhododendrons (both genus Rhododendron) are represented by an enormous number of native species, hybrids, and varieties in Japan. It is almost impossible to identify particular species solely from artworks. The general name usually applied to all azaleas is 躑躅, つつじ, ツツジ, tsutsuji. 紫, murasaki, 'purple', is simply a color designation here. The habit of the plant suggests that it is one of the deciduous azaleas.

The very general Japanese name for all species of bamboo-grass (also called dwarf bamboo) is 笹, ささ, ササ, sasa. This Japanese name has been borrowed for use as a genus name, Sasa, which has a much more restricted meaning. Kumazasa Bamboo-grass, Sasa veitchii , くまざさ, クマザサ, kuma-zasa, is a common species of dwarf bamboo which is cultivated both as an ornamental and as an ingredient in Asian herbal medicine. The Japanese name has been borrowed into English as kumazasa, kuma-zasa, kuma bamboo-grass, etc. A former name for this species, Sasa albomarginata, refers to the tips and edges of the dark green leaves which turn creamy white with the onset of cold weather.

The Japanese name is today almost always written in kana, and there is dispute about the proper kanji etymology of kuma-zasa. Rakusan always used 熊笹, lit. 'bear-bamboograss', which is now considered to be a folk etymology. Modern botanical literature prefers 隈笹, lit. 'shade-bamboograss'.

(Japanese) Green Pheasant, Phasianus versicolor, 雉(子), きじ, キジ, kiji, is a Japanese endemic. The name is also used as a general name in creating names for some other kinds of pheasants. The same kanji were formerly read also as kigishi and kigisu in this meaning. In 93 Rakusan shows both a brightly colored male and the brownish female, suggesting a mated pair.