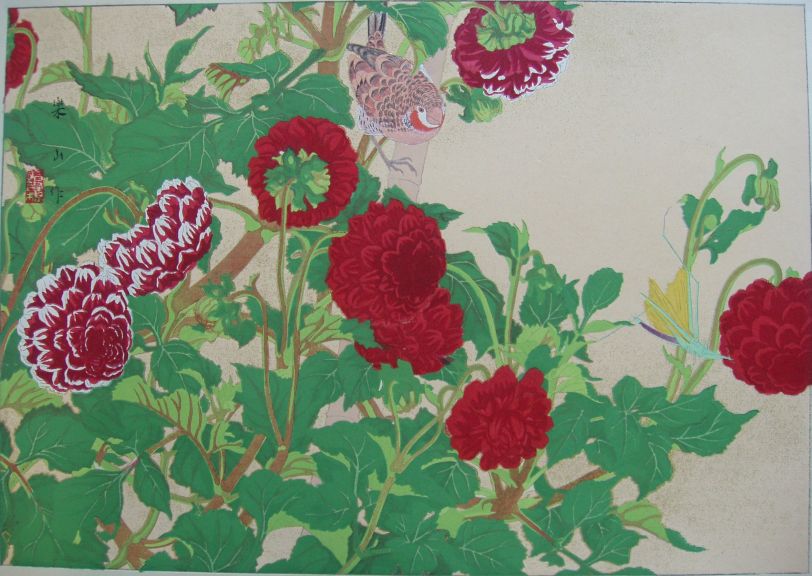 Design History:
This woodblock print was produced from an original painting on silk dating from the late 1920s whose current location is unknown. The indentification of this design as number 94 is original to Rakusan who published the print as the 94th design in his series of one hundred woodblock prints called 楽山花鳥畫譜, Rakuzan Kachou Gafu, lit. 'Rakusan's Flower and Bird Print Series'. Initial edition I publication of 94 was in March 1933 (or perhaps slightly later) in installment forty-seven (of fifty). Because this design was among the last in the series, it was unlikely to have been reprinted immediately. Therefore only the initial print run of about two hundred copies is believed to comprise edition I for this design. The copy illustrated here is typical of edition I. No later edition printings of 94 are currently known. Species Illustrated:
Garden Dahlia (Dahlia) hybrids are very popular introduced ornamental plants in Japan, and many new varieties and forms have been developed by Japanese horticulturalists. Dahlia tubers cannot survive cold winters and are typically dug up, stored, and replanted each year. Therefore dahlias only occur in carefully tended garden settings, and are often supported with bamboo stakes as in this design.

The Western name Dahlia has been variously borrowed into Japanese as だりや, ダリヤ, dariya; ダリア, daria; ダーリヤ, daariya; and ダーリア, daaria. However, Rakusan invariably used the dariya spelling (だりや in handwriting as in the title caption of 94 in the 100 Series , and ダリヤ in machine-printing, as on the Fan Series installment four folio envelope). However, modern botanical practice is to use ダリア, daria. (In writing a foreign word, katakana is always preferred today.) An older name was 天竺牡丹, tenjiku-botan, lit. 'Indian treepeony' (using the name of India although the plants are originally Central American).

In the title-caption for 94Rakusan used ぽんぽんダリヤ, ponpon dariya, 'pompon dahlia' as the name of this variety.Japanese ぽんぽん, ポンポン, ponpon, is borrowed from the flower form name pompon used in several Western languages. Rakusan used pompon dahlias in 94, 115-5, and 115.

The large insect (not mentioned in the title-caption) is clearly a member of the grasshopper family Acrididae. It is probably the Oriental Long-headed Locust, Acrida cinerea, 精霊飛蝗, しょうりょうばった, ショウリョウバッタ, shouryou-batta, lit. 'spirit-locust', a common Japanese species. Rakusan has used the same sort of insect in several different designs.