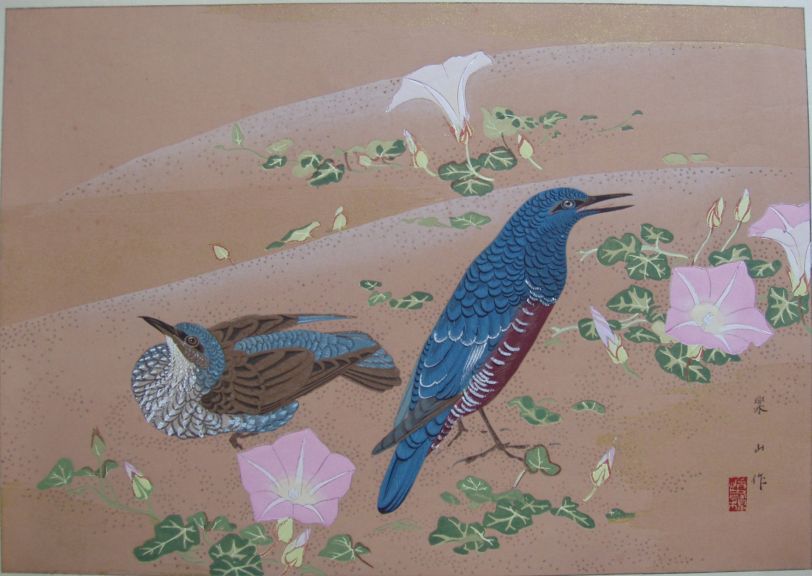 Design History:
This woodblock print was produced from an original painting on silk dating from the early 1930s whose current location is unknown. The indentification of this design as number 97 is original to Rakusan who published the print as the 97th design in his series of one hundred woodblock prints called 楽山花鳥畫譜 Rakuzan Kachou Gafu, lit. 'Rakusan's Flower and Bird Print Series'. Initial edition I publication of 97 was in May 1933 (or perhaps slightly later) in installment forty-nine (of fifty). Because this design was among the last in the series, it was unlikely to have been reprinted immediately. Therefore only the initial print run of about two hundred copies is believed to comprise edition I for this design. The copy illustrated here is typical of edition I. No later edition printings of 97 are currently known.

The publication of the first volumes of machine-printed plates and text for 鳥類寫生圖譜 (鳥類写生図譜) Chourui Shasei Zufu (CSZ) (1927-1938) was one of the main influences which inspired Rakusan to create his woodblock print 100 Series. [The exploration of this influence is the subject of a forthcoming article to appear on this website.] Although Rakusan used several CSZ designs as subject inspirations for his own original paintings; unusually, his design for 97 includes an entirely copied element. The female bird on the left was taken directly from the natural-setting plate for CSZ#48 (volume 2, number 12). Although the bird in 97 is shown sitting on the ground, its left foot remains curled as though around a branch as in the original plate. Most of the model paintings for the 100 Series date from the late 1920s, but since CSZ#48 was not published until late June 1930, it is evident that some were painted later on into the 1930s.

This design is one of only three in this series which mention a physical land form or feature in the title-caption in addition to the botanical and the bird. Here, 砂丘, sakyuu, is 'sand dune; sand hill'.