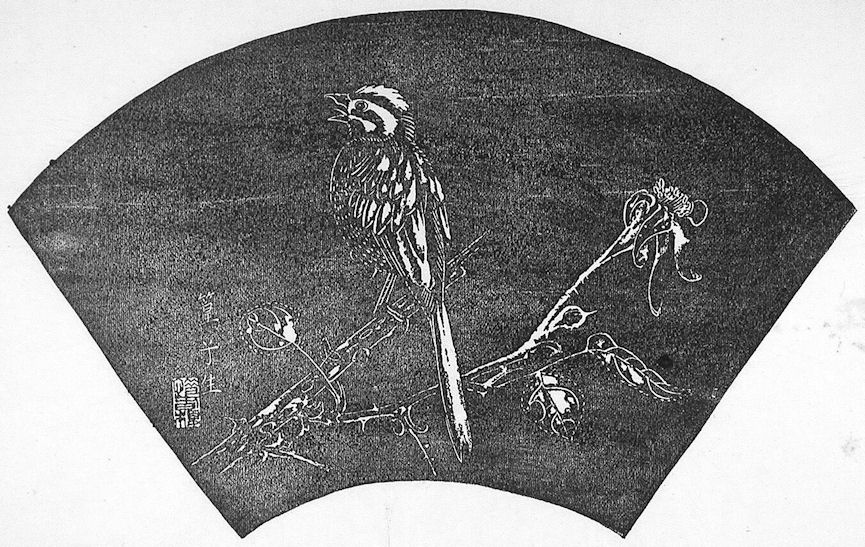 The signature 篁子生, Kou-shi-sei forms the basis of the titles for both series in the 篁子生画選, Koushisei Gasen, Project. However on woodblock prints it is an uncommon signature variation used with only a few designs. Its first known use is on this print 101-1. Rakusan soon elaborated this signature to 楽山篁子生, Raku-zan Kou-shi-sei, which is found on most later woodblock prints.

Rakusan did not include the Fan Series in his main sequence numbering. Therefore, the original number used for each of the 36 Series prints has been modified to identify the Fan Series members of its theme. The five different fan silhouette shapes have been here assigned arbitrary numbers 1 through 5. To indicate a fan design these shape designations are added to the 36 Series number separated by a hyphen. In themes which contain duplicated fan shapes, one has been arbitrarily designated A and the other B. 101-1 indicates that this is a Fan Series design with fan shape 1 in the 101 Rose theme. Like all other designs in this series, 101-1 was only produced in a single print run, and few copies are currently documented.

The composition of 101-1 includes a single rose which has lost all of its petals on a stem with leaves. Sitting on the stem is a meadow bunting singing. The design is a successful negative, with the areas of light and dark on the bird correctly reversed. Oddly, and not entirely effectively, the leaves and part of the bird are outlined with a lines of dots or dashes. The remaining elements are essentially simple line drawings.