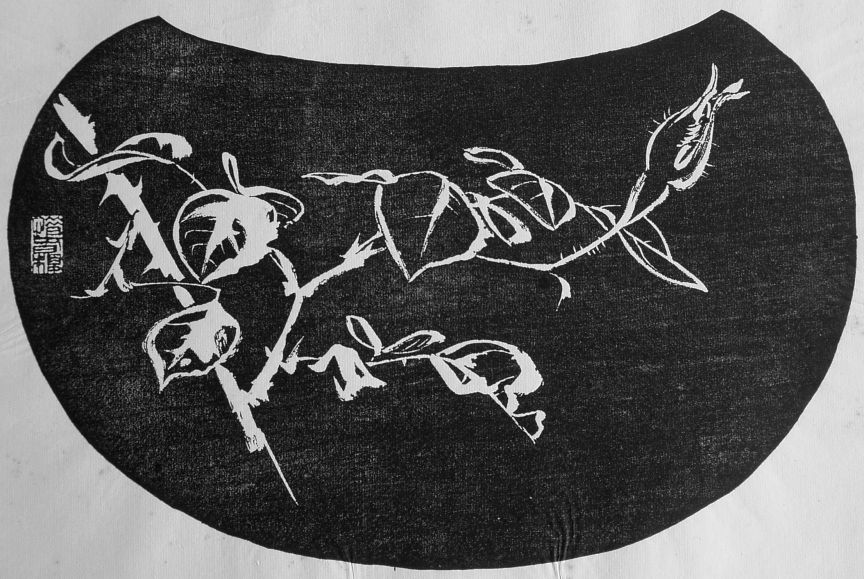 Rakusan did not include the Fan Series in his main sequence numbering. Therefore, the original number used for each of the 36 Series prints has been modified to identify the Fan Series members of its theme. The five different fan silhouette shapes have been here assigned arbitrary numbers 1 through 5. To indicate a fan design these shape designations are added to the 36 Series number separated by a hyphen. In themes which contain duplicated fan shapes, one has been arbitrarily designated A and the other B. 101-2 indicates that this is a Fan Series design with fan shape 2 in the 101 Rose theme. Like all other designs in this series, 101-2 was only produced in a single print run, and few copies are currently documented.

The composition of 101-2 includes a single rosebud on a stem with leaves. All of the elements are essentially simple line drawings.


Species Illustrated:
The general Japanese name for any kind of Rose, (genus Rosa), is 薔薇, ばら, バラ, bara. The 101 Rose theme is not defined by any particular variety of rose, but all of the open flowers are large and double-petaled garden hybrids similar to the kind of rose in 101.
Related Designs: Other designs in the 101 Rose theme:
Other designs with roses: