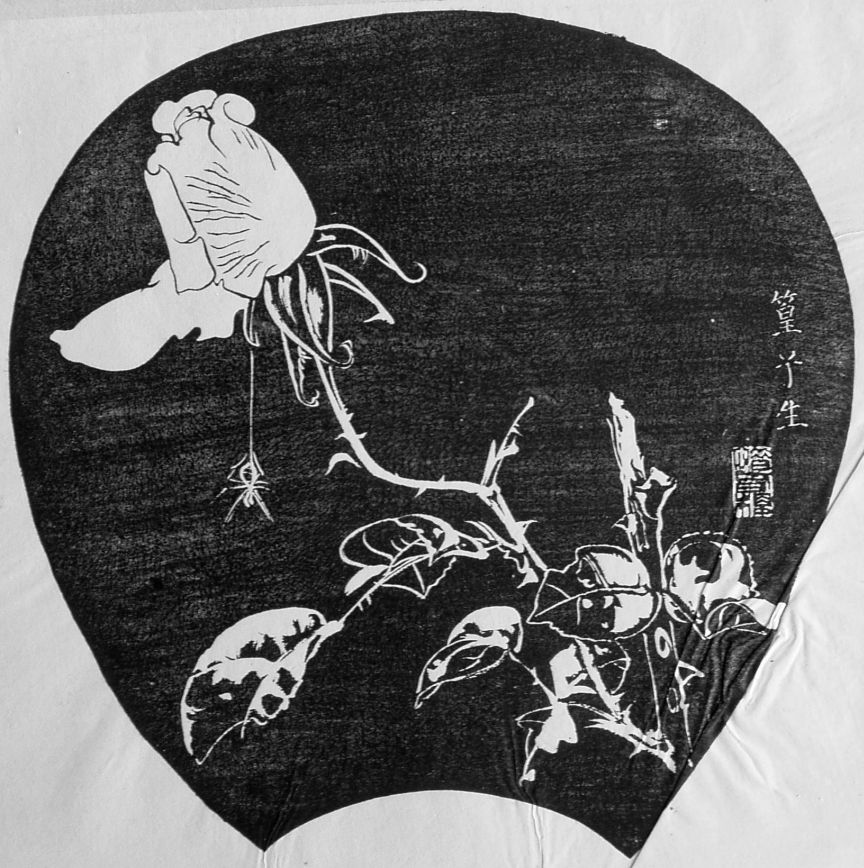 The signature 篁子生, Kou-shi-sei forms the basis of the titles for both series in the 篁子生画選, Koushisei Gasen, Project. However on woodblock prints it is an uncommon signature variation used with only a few designs. Its first known use is on this print 101-4. Rakusan soon elaborated this signature to 楽山篁子生, Raku-zan Kou-shi-sei, which is found on most later woodblock prints.

Rakusan did not include the Fan Series in his main sequence numbering. Therefore, the original number used for each of the 36 Series prints has been modified to identify the Fan Series members of its theme. The five different fan silhouette shapes have been here assigned arbitrary numbers 1 through 5. To indicate a fan design these shape designations are added to the 36 Series number separated by a hyphen. In themes which contain duplicated fan shapes, one has been arbitrarily designated A and the other B. 101-4 indicates that this is a Fan Series design with fan shape 4 in the 101 Rose theme. Like all other designs in this series, 101-4 was only produced in a single print run, and few copies are currently documented. (Note that the copy of 101-4 illustrated above is foxed. The foxing is most evident on the paper surrounding the fan shape.)

The composition of 101-4 includes a single rosebud on a stem with leaves. The rosebud is shown silhouetted with internal lines - essentially a line drawing with the solid background darkened out. However, the leaves are mostly simple line drawings on that background. Dangling from the rosebud on a thread of spider silk is a small spider.

Like English, Japanese has a general name for any spider, 蜘蛛, くも, クモ, kumo. Rakusan rarely included spiders in his artworks, and only three woodblock print examples are known. The small spider dangling from a thread of spider silk under the rose bud is probably a kind of orb spider (family Araneidae). The striping on the body suggests Argiope amoena, 黄金蜘蛛, こがねぐも, コガネグモ, kogane-gumo, lit. 'yellow-gold spider'. However, the spider is very sketchily rendered, and certain identification is likely impossible.