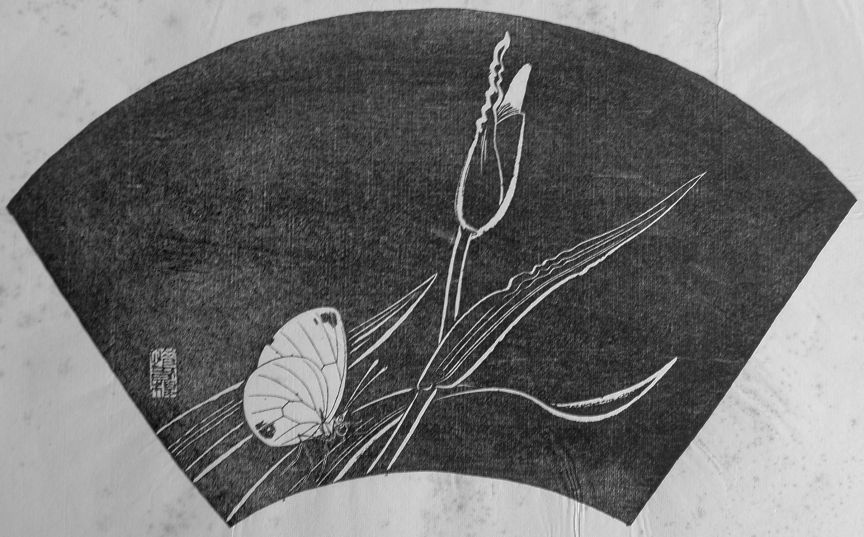 Rakusan did not include the Fan Series in his main sequence numbering. Therefore, the original number used for each of the 36 Series prints has been modified to identify the Fan Series members of its theme. The five different fan silhouette shapes have been here assigned arbitrary numbers 1 through 5. To indicate a fan design these shape designations are added to the 36 Series number separated by a hyphen. In themes which contain duplicated fan shapes, one has been arbitrarily designated A and the other B. 102-1B indicates that this is one of two Fan Series designs with fan shape 1 in the 102 Rabbitear Iris theme. Like all other designs in this series, 102-1B was only produced in a single print run, and few copies are currently documented.

Theme History:
Although each theme typically consists of a quintet of monochrome Fan Series designs (one design in each of the five fan shapes), the 102 Rabbitear Iris theme is irregular in both its history and its composition. When Rakusan was experimenting with designs which would become the Fan Series and the 36 Series, he had originally thought to have multiple themes with the same general subjects. He began by creating and carving a few representative designs from each of those themes he intended to publish first. After having carved four iris designs divided among two planned iris themes, Rakusan changed his mind. However, not wanting to waste his previous efforts, he combined these two incomplete themes into one.

The four Fan Series designs (including 102-1B) and the 36 Series design 102 in the 102 Rabbitear Iris theme have seal A and were all created and carved approximately in the third quarter of 1933. According to the Fan Series delivery documents for installment one, the woodblock prints of the 102 Rabbitear Iris theme were printed in January 1934 and distributed January 20, 1934 in the first delivery, installment one (of twelve). There Rakusan used the theme title かきつばた, kakitsubata, 'rabbitear iris'.

Description:
The composition of 102-1B includes a closed bud just beginning to show color and a white-butterfly sitting on one of the leaves. The butterfly is the only non-thematic element among the designs of the 102 Rabbitear Iris theme. This early design is one where Rakusan had difficulties with executing the ishizuri technique. The white-butterfly looks normally colored in the fan print, but since the patterns of light and dark are supposed to be reversed, it should be dark. In contrast the iris bud is meant to be a dark purple variety and was correctly carved. The leaves and stems are simple line drawings which are successful either way. The woodblock print of 102-1B was modeled closely on an actual-size original sumi sketch which although lost can usually be reconstructed by digitally reversing the image of the woodblock print. However, here the butterfly was probably originally also a line drawing with dark spots on the wings.
Species Illustrated:
Rabbitear Iris, Iris laevigata, 杜若, 燕子(花), かきつばた, カキツバタ, kakitsubata, is native to Japan where it grows in shallow water in ponds and marshes. There are many Japanese names for kinds of iris, and considerable hybridizing and selection have linked the original individual species into a complex continuum.

The general name for all of the closely related Yellow-and-White butterflies (family Pieridae) is 白蝶, しろちょう, シロチョウ, shiro-chou), 'white-butterfly', although many are actually yellow. It should eventually be possible to identify more closely the small butterfly shown in 102-1B.