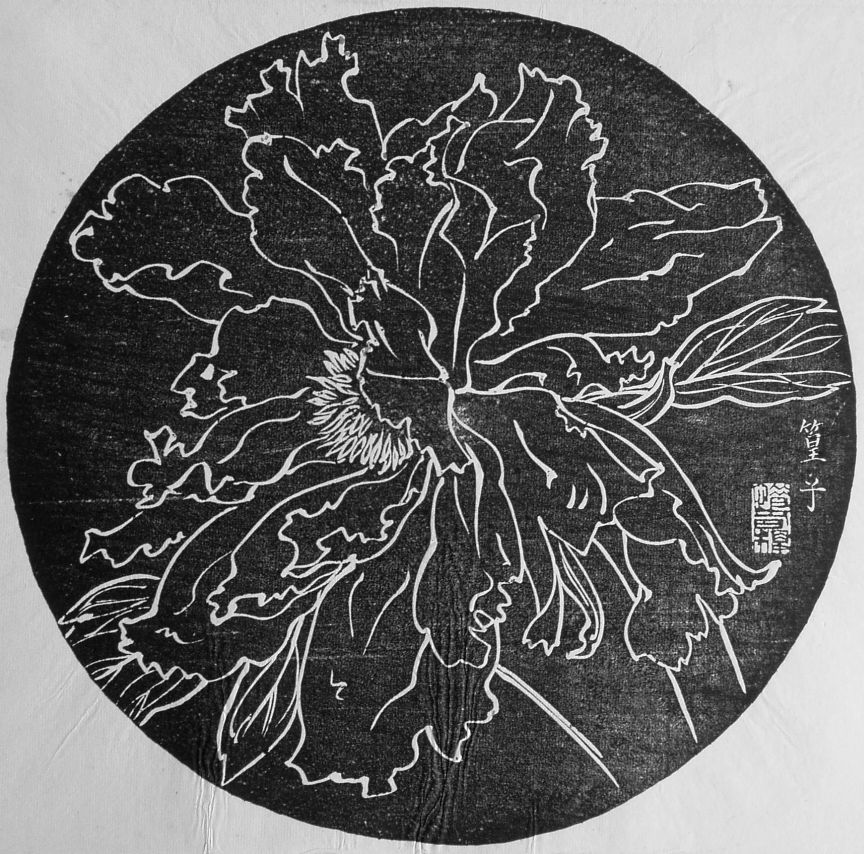 The signature 篁子, Kou-shi is found only on this one print. It apparently represents a one-time experiment with new signatures. Rakusan soon elaborated this signature to 楽山篁子生, Raku-zan Kou-shi-sei, which is found on most later prints and in the title of the series.

Rakusan did not include the Fan Series in his main sequence numbering. Therefore, the original number used for each of the 36 Series prints has been modified to identify the Fan Series members of its theme. The five different fan silhouette shapes have been here assigned arbitrary numbers 1 through 5. To indicate a fan design these shape designations are added to the 36 Series number separated by a hyphen. In themes which contain duplicated fan shapes, one has been arbitrarily designated A and the other B. 103-5 indicates that this is a Fan Series design with fan shape 5 in the 103 Tree-peony theme. Like all other designs in this series, 103-5 was only produced in a single print run, and few copies are currently documented. (Note that the copy of 103-5 illustrated above is foxed. The foxing is most evident on the paper surrounding the fan shape.)

Description:
The composition of 103-5 includes a single, large, tree-peony flower executed as a simple line drawing. The woodblock print of 103-5 was modeled closely on an actual-size original sumi sketch which although lost can be reconstructed by digitally reversing the image of the woodblock print:
Species Illustrated:
Tree-peony, Paeonia suffruticosa, 牡丹, ぼたん, ボタン, botan, now comes in many colors, shapes, and varieties. Winter-blooming Tree-peony, Paeonia suffruticosa var. hiberniflora, 寒牡丹, kan-botan; or 冬牡丹, fuyu-botan; both lit. 'winter tree-peony', is the earliest-blooming variety of tree-peony and typically begins to bloom before the winter snow has melted. Therefore, to protect the new growth the plants are typically staked and often protected from the weight of the snow by a woven grass mat as a kind of open tent structure.
Related Designs: Other designs in the 103 Tree-peony theme:
Other designs with tree-peonies:
Other designs in the later 117 Winter Tree-peony theme:
Other designs with winter tree-peonies: